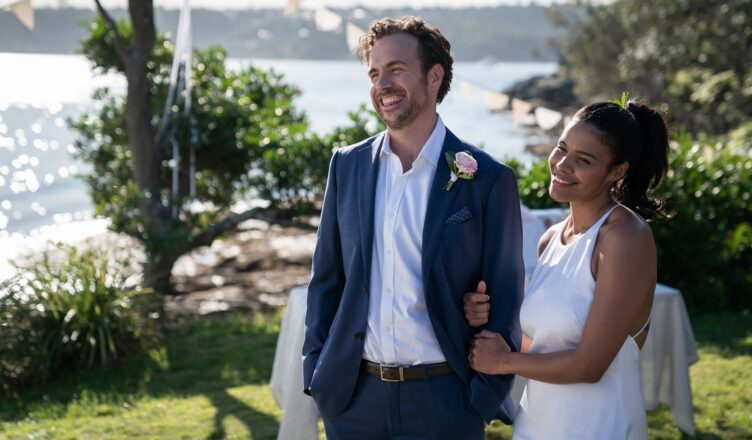 LONG STORY SHORT ***1/2 (94 minutes) M
Time travel has become such an over-used device in movies that one wishes we could all jump forward to a time where somebody could thing up some fresh approach to the old chestnut.

Luckily that won’t be necessary thanks to writer/director Josh Lawson who brings to his second feature film a novel twist to time travel that is both funny and revealing, if not entirely original.

With time stress deeply embedded into his hurried lifestyle, urbanite Teddy (Rafe Spall) nonetheless makes time to marry an aspiring writer (Zahra Newman) after encountering a stranger (Noni Hazlehurst) who warns him about how life can just fly by.

Through some mystic means she passes onto him a celestial affliction – could be a curse, could be a blessing – that propels him forward in time one year every few minutes, landing him each time on his wedding anniversary.

After realising that what is happening to him is not some cruel dream, Ted painfully witnesses how his misuse of time eats away at his marriage, his relationship with his child, with his best friend (Ronny Chieng) and his overall quality of life.

Have we seen shades of this idea before, where somebody gets to observe and assess how they live their life through the gift of a rift in the space/time continuum? Of course we have.

There’s It’s a Wonderful Life, all the film versions of A Christmas Carol (kudos to Charles Dickens for using time travel back in 1843!), the underrated 2006 Adam Sandler film Click, Sliding Doors and the Richard Curtis film About Time.

Indeed, speaking of Curtis, one could be forgiven for thinking, while enjoying this winning, warm, funny fantasy film, that Lawson has taken a page or two out of The Richard Curtis Guide to Making a Quirky & Charming Rom Com.

Well, to be fair, that’s not quite the case – it’s more like Lawson has taken a few chapters, plus the index and the appendix. But no mind. Long Story Short flows with the grace and piquancy of a good Richard Curtis film, though with the added benefit that it doesn’t star Hugh Grant. That’s intended as high praise, especially the Hugh Grant bit.

More seriously, Lawson proves himself a skilled storyteller here, with an intuitive understanding of the key rom-com conventions, particularly the one about grounding the comedy in emotion.

Given the constant cascade of exposition needed to tell us what’s going on – an entire year has to be recapped every few minutes – his direction is crisp and focused.

The fantasy premise is kept afloat by a zippy, comic pace and a series of well-judged dramatic moments that underpin how quickly Teddy’s life is fleeting by. The most touching of these is the revealing moment when Ted is confronted by a loved one he has difficulty recognizing. It’s the film’s best scene, beautifully handled.

Tasked with imparting so much of the story as it speeds along, Spall does a great job as Tommy opposite Newman, who earths the film emotionally. While Tommy appears to us as existing in real time, her character has to develop across a decade. Although we see this in jumps, it never jars.

In keeping with the film’s theme of time stress, Lawson respectfully brings the whole kit and kaboodle in at a tight 90 minutes or so. The film’s chief message is about not wasting time and Lawson lives up to that by not wasting ours.

Long Story Short is markedly different from Lawson’s impressive, underrated 2013 debut, the sex-comedy anthology The Little Death. As busy as he is as an actor, here’s a wish that there’s not as long a wait for his next.

Footnote: It’s been a strong opening innings for Australian film so far this year, thanks partly – but not solely – to the Covid-induced lack of competition from Hollywood. (That’s one theory, anyhow). We’ve had The Dry, Penguin Bloom, High Ground and Occupation Rainfall, four very different genre-based films aiming for big audiences. If Long Story Short pleases the crowds it wants to please, 2021 might be another banner year.