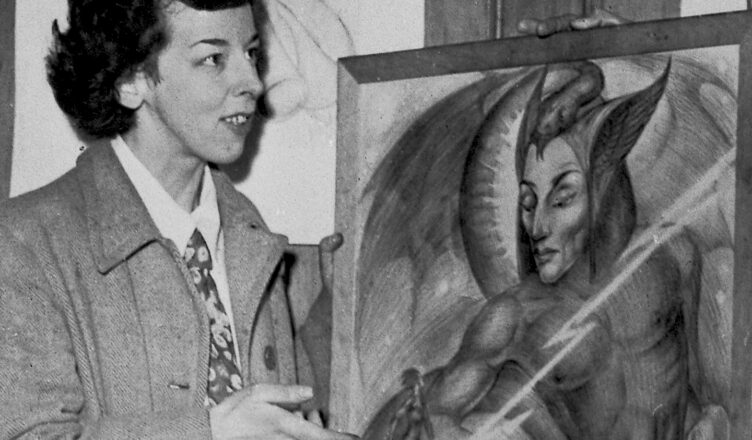 Spell casting: The bizarre life of artist Rosaleen Norton is profiled in ‘The Witch of Kings Cross’.

THE WITCH OF KINGS CROSS ***1/2 (78 minutes) MA
It’s something of an understatement to describe Rosaleen Norton as a woman without peer, a fact that becomes pretty obvious pretty early in director Sonia Bible’s engrossing and enjoyable profile of Norton, a transgressive, outrageous artist who upset and excited those who defended the buttoned-down values of mid-century Australia.

Replete with archival material, artworks and interviews with close friends and art experts who have studied her remarkable life, Bible presents a portrait of Norton as an artist ahead of her time who gleefully shook the foundations of what was deemed acceptable conduct, especially for a woman in the 1930s, 40s and 50s.

A boisterously defiant proto-feminist by any fair measure, Norton embraced the shock value roused by her dark artworks, which featured pagan idolatry, devils, nudity and dashes of pornography.

The tabloid media loved her sensational appeal, fashioning her as a devotee of the occult and giving her a notoriety she enjoyed so much she came to embraced it, deepening the delicious outrage people enjoyed. In a sweet irony, Bible points out how the beverage of choice for such a drug-loving, booze guzzling reprobate was a good old cup of tea.

Unfortunately, she held on to a clutch of them. Though hidden, they fell into the hands of a snooping journalist who was busy illegally photographing her flat after it had been emptied by a police raid.

It’s an enthralling portrait, obviously made on a low budget with a lot of passion and a clear desire to highlight Norton’s rightful place in Australian culture as somebody whose free expression through art was seen as a threat to the sanctity of public morals. She was certainly targeted by the police, who despised her and took delight in harassing her for vagrancy.

Given how comprehensive a job the film does in highlighting what an eventful and bizarre person Norton was, one hopes it will highlight the sad fact no feature film has yet been made about such an extraordinary, singular woman.

On Amazon, iTunes, Vimeo and GooglePlay.

UNSOUND *1/2 (84 minutes) MA
In its attempt to thrust a fist in the air for the rights of people with hearing loss, Unsound unspools as a well-meaning misfire, its clumsy story hobbled by implausibilities, cringe-worthy dialogue and a head-strong central character who is impossible to warm to.

When a neighbourhood dance club for the deaf is threatened with closure because of noise complaints, its hearing-impaired DJ Finn (Yiana Pandelis) braces for a fight.

Conveniently, all objections to the club are instantly cast as ignorant and uncaring, and while the rights of Finn and friends are front-and-centre, there’s no interest shown in the rights of ratepayers to get a decent night’s sleep.

Finn, a trans-man, strikes up a relationship with Noah (Reece Noi), a gay musician from Britain who demonstrates a galling lack of professionalism when he walks out on a tour and moves to Sydney where his mother (played by veteran Paula Duncan) lives.

Sloppily directed by Ian Watson and written by Ally Burnham, the story lacks any realism or dramatic tension as Finn behaves in a manner that would infuriate even the most sympathetic supporter.

Finn is an arrogant, insulting prig whose appalling behaviour is tolerated to such a ridiculous degree it makes you wish for the immediate closure of the club, no matter how precious or emblematic it is supposed to be.

None of this is helped by a host of wimpy supporting characters who refuse to challenge Finn, nor by dialogue that often sounds like it belongs on a protester’s placard.

The film might have its heart in the right place but that’s no excuse for being so predictable and dull.

ESCAPE FROM EXTINCTION **1/2 (89 minutes) PG
It’s difficult to imagine how any right-thinking person could have any problem with the existence of zoos, given all the important work they do caring for animals and conducting research to help endangered species survive.

Still, for those few who have serious doubts comes Escape from Extinction, a documentary narrated by Helen Mirren that soundly counters the anti-zoo protest movement with a cascade of facts, figures and pretty pictures.

Produced by the American Humane Association with an obviously self-serving agenda, the film will captivate any armchair conservationist, though it does labour its points and can’t quite escape the feeling that we should be watching this on television.

WRONG TURN: THE FOUNDATION **1/2 (110 minutes) MA
The lovably weird cannibalistic critters who populate the backwoods of the Wrong Turn films are back, this time tormenting a hapless group who wander off the Appalachian Trail.

Intended to reboot the horror franchise, this splatfest features the usual gang of young, common sense-deprived idiots who go where they know they shouldn’t. Where would the genre be without this cinematic staple?

Pursued and held captive by these admirably self-sustaining brutes (who have formed a walled-in community, no less), there is hope as a father (played a silver-haired Matthew Modine) comes to the mysterious, booby-trapped mountain looking for his missing daughter who hasn’t been answering her phone.

No doubt Wrong Turn is passable fodder for fans, who will love that it was written by Alan B. McElroy, the scribe of the original. In fairness, horror films tend to attract dedicated fans of the genre who will gobble up all that is served to them provided there is enough bloodshed and cheap thrills. On that score this film can’t be faulted for its dedication to duty.

For normal folk though, the jaunt ambles along quite congenially for about half its length before it begins to over-stay its welcome. What should have been a gruesomely diverting outing turns into an overlong chase through darkened woods that becomes a tad tiresome, especially when guns and Molotov cocktails become involved.

And, please, if you’re going to use a revolver to battle your adversaries, do us all a favour and keep count of how many shots you fired. (Harry Callahan excepted.)

Admittedly, the film does manage a pretty cool double-twist in the final reel that almost justifies why the creators decided to reboot the franchise rather than conclude it.