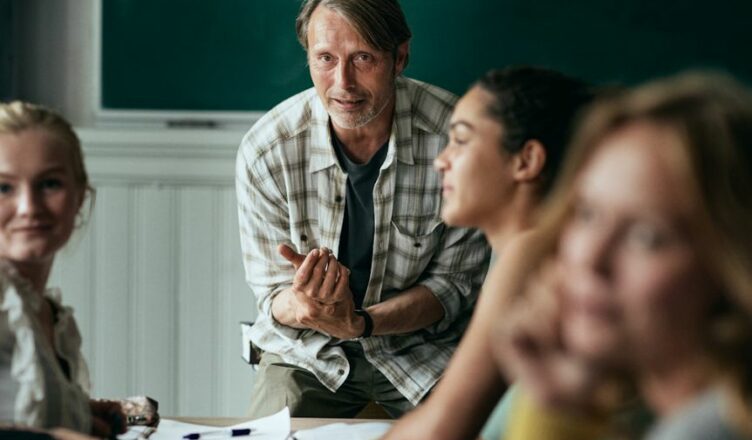 Tipsy teacher: Mads Mikkelsen stars in the Danish drinking drama ‘Another Round’.

ANOTHER ROUND (DRUK) **** (116 minutes; subtitled) M
The fiendish allure of alcohol has long made for rich movie subject matter, but in this excellent, brash Danish drama from veteran Thomas Vinterberg (Festen; The Hunt) the motive to drink is cleverly cloaked as an excursion in idle curiosity.

While celebrating a birthday, four longtime friends who all work as teachers at the same school in Copenhagen decide to conduct a daring experiment.

In the midst of a pleasant evening, one of them quite soberly brings up famed psychotherapist Finn Skårderud who controversially believes that people would operate more efficiently with a blood alcohol level of 0.05 – that being the precise deficiency with which they are born.

Game for adventure, the quartet agree to give the idea a spin in real life. You know, just to see.

It sounds like a perfectly valid academic exercise to Martin (Mads Mikkelsen), Tommy (Thomas Bo Larsen), Peter (Lars Ranthe) and Nikolaj (Magnus Millang) – or, at least, that is what they convince themselves the project to be.

Careful to follow a strict set of rules – including famous drunk Ernest Hemingway’s vow never to drink after 8pm – and determined to give their venture the air of scientific inquiry by documenting their progress in words, they put their experiment in action and soon find the folly actually produces surprising positive results.

In the case of phys-ed teacher Tommy, his usually drab classes on the sports field find new verve, even inspiring a diffident little weed of a kid with glasses to participate and feel part of the team.

The biggest change, however, comes with Martin, a middle-aged man whose marriage, family life and career have hit the doldrums.

With a swig of vodka before fronting his class he finds his attitude revitalized. He used to be a lousy teacher of history – so apathetic, indeed, that his students are compelled to convene a meeting with him to complain.

Yet boosting his alcohol reading to 0.05 – Vinterberg loves cutting to black screens with meter readings – transforms him into the kind of enthusiastic, inspiring teacher you usually find energizing kids in uplifting movies from the 1990s.

Better still, his strained relationship with his wife and kids starts to heal, shifting into a happier mode that sees him taking them on fun camping trips and enjoying a new-found intimacy. In an especially moving moment, he and his wife confess how much they’ve missed each other. It’s a touching beat.

Given their initial success, the four agree that if matters improve so well with 0.05% alcohol in their system, then logic dictates that more alcohol will produce better results. So, they start hitting the booze like there’s no tomorrow, their concern about studiously monitoring their intake and subsequent behaviour having somewhat fallen by the wayside.

Unsurprisingly, this leads to precisely where you’d expect it to lead; they begin binge drinking to the point where they pee in bed, fall about in convenience stores and fall asleep in the neighbour’s driveway.

It’s raw, confronting stuff that lays bare one of the main drivers of alcoholism – denial. Each man is secretly besieged by stress and insecurity, so the “experiment” offers them the excuse they need to find solace in drink.

In a fabulously shaded performance Mikkelsen vividly registers the incremental nature of alcoholism, but though he is the film’s star Vinterberg treats the four leads as an ensemble, tracking each man’s descent in poignant detail.

As with most good films about drinking, Another Round doesn’t waste time moralizing because it doesn’t need to; when somebody pulls themselves apart with booze it’s superfluous to signal to the audience that this is not, all things considered, a wise way to behave.

Indeed, the film acknowledges how pleasurable drinking can be – echoing the opening of the forgotten 1981 Neil Simon film Only When I Laugh – and how a love of drink is not necessarily a reflection on somebody’s moral character, with Vinterberg wittily playing with the fact that Adolf Hitler was not a drinker and that Winston Churchill was.

Perhaps one thing the film should have noted for the benefit of its foreign audiences is that Denmark has a major drinking problem and has been battling the scourge for the past 10 years.

Also, as Wikipedia notes, the film has a powerful, personal motive for Vinterberg. The film originally began as an adaptation of a play he wrote, which his daughter, Ida, long felt would make a good movie. She had told him about the excessive drinking habits of teenagers and was set to appear in the film as Martin’s daughter. Tragically, four weeks into filming she was killed in a road accident. The nature of the film was changed and is dedicated to her.

Oddly, Another Round has been described as a comedy-drama. There are some funny moments in it, sure, but everything is framed by a narrative and a tone that is wholly uninterested in making light of such serious subject matter.

Footnote: The original Danish title for Another Round is Druk, which, according to Google Translate, means “binge drinking”. Common practice as it is to re-title non-English language films with an English title for English-language markets, this is one case where they could have gotten away with sticking to the original title.