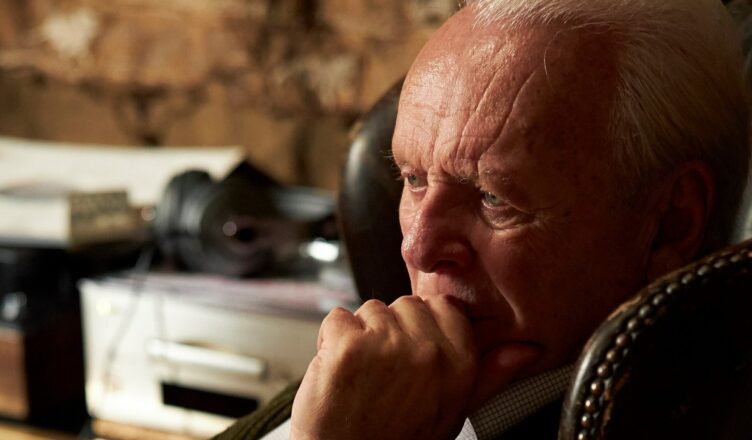 THE FATHER **** (97 minutes) M
There are very few sure bets in the movie world, we all know that by now. Still, there might well be angry protest marches across the globe if Anthony Hopkins doesn’t nab a Best Actor Oscar for his outstanding performance in The Father, a compelling house-bound drama about an old man and his dementia.

Hopkins plays Anthony, an aging patriarch with a loving daughter Anne a very confident sense of himself and of his domain over the flat in which he lives.

As we met him his only main problem appears to be his watch. Where is it? Did he misplace it? Or was it stolen by his caretaker, the latest in a long succession who try their hardest but end up exhausted by his behaviour, which can swing erratically.

Told entirely from Anthony’s point of view, his Alzheimer’s takes the form of constantly changing circumstances that he cannot understand. One moment he is living alone in the flat; the next he is living with people. His daughter appears as one person, then another. Even his place in time jumps around; in an instant he can be displaced by five years.

Aside from being a superb acting showcase, the defining quality of The Father is how Anthony’s constant, maddening state of confusion is shown with such clarity. We see the world as he sees it, only we have the luxury of working out what is going on. He remains trapped. His memory loss is seen as a case of memories misplaced.

Hopkins inhabits the character like the cardigans he wears in the film. It’s largely pointless to enter any debate over whether it’s the best thing he’s done – there are simply too many contenders – but it is easily on par with what he gave us in The Remains of the Day, The Elephant Man and 84 Charing Cross Road – just to name three.

That said, the film, directed by Florian Zeller (adapting his own 2012 play, and doing little to hide its theatrical origin) registers the real-world impact on Anthony’s family, and the small roster of supporting players deliver their own emotional punches.

Witnessing her father’s slow disintegration, Olivia Coleman is subdued and splendid as the tortured carer and daughter. But if the film has a scene stealer it’s Rufus Sewell whose fabulous subtlety as the son-in-law is laced with barely concealed bitterness towards Anthony about what his presence in their lives has cost them.

The film joins an esteemed list of excellent films dealing with the affliction of Alzheimer’s, such as Still Alice and Iris, and easily registers as one of the best and most affecting.