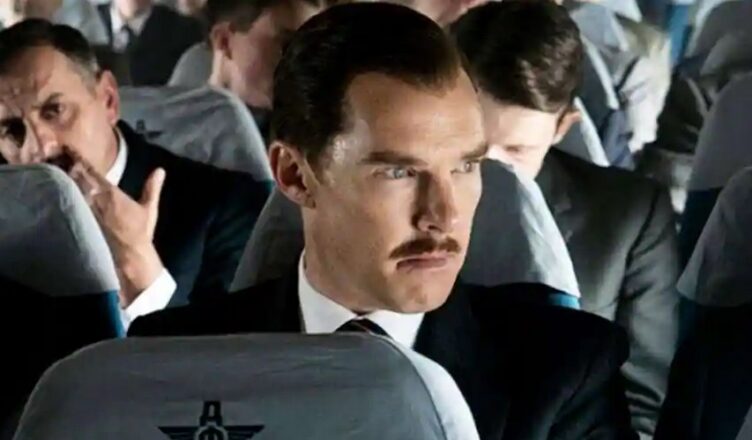 Amateur hour: Benedict Cumberbatch plays a businessman caught up in the Cold War.

THE COURIER ***1/2 (111 minutes) M
There were a lot of high-profile factors at play that prevented the United States and the former Soviet republic from a full-on nuclear exchange in October 1962, yet the purpose of Dominic Cooke’s excellent, small-scale espionage drama is to shed light on a small yet crucial lynchpin in that major historical near-cataclysm.

The offer to serve his country at the height of the Cold War comes as a shock to mild-mannered, middle-of-the-road British businessman Greville Wynne (Benedict Cumberbatch).

Over a posh lunch he tells MI6 man Dickie Franks (Angus Wright) and CIA agent Emily Donovan (Rachel Brosnahan from The Marvelous Mrs Maisel) that he’s just an ordinary guy who knows nothing about the spy world or the politics it serves.

That’s what makes him such a good candidate for their new mission, they explain patiently and somewhat persuasively.

Their highly valued informer in Moscow, Oleg Penkovsky (Merab Ninidze) needs a new contact to feed information to, so who better to recruit than a rather dull, strait-laced family man who can travel to Russia without raising any suspicion. After all, the KGB has bigger fish to fry than some anonymous British businessman pitching deals.

On condition of his safety so that his wife Sheila (Jessie Buckley) won’t suddenly find herself a widowed parent to their son, he agrees to what he is assured is a low-risk venture. All he has to do is secretly collect parcels from Penkovsky and bring them back to Britain.

All seems fine, apart from the secrecy Wynne must maintain.

Enter the Cuban Missile Crisis and matters hit the boil very quickly as Russia and America engage in a world-threatening stare-down over the Soviet attempt to make Cuba a launching site for nuclear missiles, giving it a first-strike capability that would trigger war.

And at the silent centre of it all are Wynne and Penkovsky whose secret courier service helps save the world from obliteration.

It doesn’t help them much, however. With his friend Penkovsky in trouble, a deeply worried Wynne is eager to do something but is counselled by his cool-headed, though not entirely dispassionate handlers to accept the way the espionage world works, forget about Penkovsky and get on with his life as it was before.

As history records, Wynne found it impossible to engage in such a betrayal, even though he is assured that, had the situation been reversed, Penkovsky would have done the same thing.

The film’s third act provides great drama about the power of moral obligation and the inner strength Wynne had to call upon to survive his ordeal. It also clocks in as another recent film about the strength of male friendship.

Playing to his strengths as the go-to guy for solid British archetypes, Benedict Cumberbatch does a terrific job as the straight family man who becomes increasingly conflicted by his sense of duty to country.

It seems like a bit of excitement to the boring businessman at first before things turn ugly, and Cumberbatch isn’t afraid to go there. We like to celebrate actors who will undergo physical transformation for a role and Cumberbatch earns high praise for his sterling work in the film’s climactic reels.

Made on an obviously low budget, the film has a chilled colour pallette that lends an appropriately oppressive air to the cinematography by renown British lensman Sean Bobbitt, who did Dominic Cooke’s 2017 debut On Chesil Beach as well as the acclaimed Steve McQueen films Hunger, Shame, Widows and 12 Years a Slave.