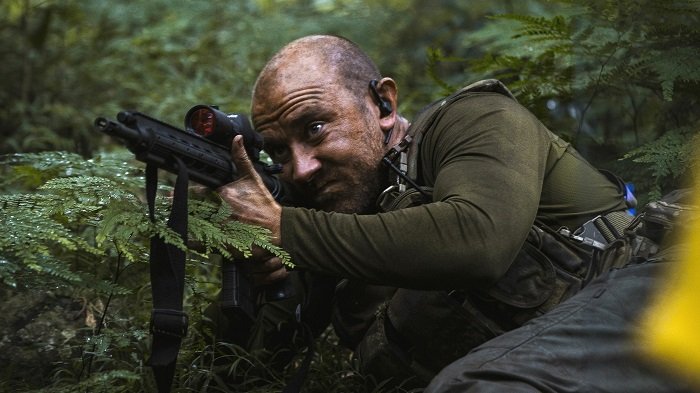 ESCAPE AND EVASION *1/2 (95 minutes) MA
You certainly can’t argue with the good intentions of Escape and Evasion, an Australian film that tries ever-so-hard to address the plight of returned soldiers while delivering a dramatically driven action thriller.

Regrettably, good intentions do not automatically make a good movie. Escape and Evasion certainly strives to be potent and punchy, but scatty direction, implausible action sequences, thin production values and dashes of cringeworthy melodrama keep it from hitting the marks it is so obviously aiming for.

Seth (Josh McConville) is a special forces soldier who has returned from active service in Myanmar. He’s the only survivor of a covert mission that went very wrong, both for his team and for himself.

Estranged from his wife and daughter, he lives alone in a shack with nothing but horrific flashbacks and a loaded pistol for company.

What he experienced has given him a crippling case of post traumatic stress disorder (PTSD), though he fights to keep sane so he can be allowed to continue seeing his daughter Lizzy (Jessi Robertson, another child actor doing good work in a not-so-good film).

Yet his memories of battle haunt him, creating hallucinations that strike him down while in public.

He is contacted by Rebecca (Bonnie Sveen), a journalist whose brother Josh (Hugh Sheridan) was one of the men lost in the jungle. She wants answers to questions he doesn’t want to hear, yet he feels a connection with her that offers some solace in his loneliness.

Eventually he opens up about what’s locked in his head and the film cuts to the longest in a series of flashbacks that fully explains what happened to him and his men, and why he has such trouble sleeping.

To give him his due, McConville does a fairly good job portraying a soldier afflicted with PTSD, and kudos to writer/director Storm Ashwood for having the fortitude to make a movie with the suffering of returned Australian soldiers at the heart of its story.

If only it was a better film.

There is some very shaky acting in Escape and Evasion, with Rena Owen’s turn as a tough senior military official being especially unconvincing.

And while McConville has his big moments showing a man in deep trauma, he is far less effective in domestic scenes with his family. Supposedly ridden with anxiety, he comes over as a bland brute rather than somebody deserving of sympathy or who seeks understanding.

The film is blighted by haphazard direction and all-too-obvious movie references that often make Escape and Evasion feel like Apocalypse Now-Lite.

The over-use of a film reference is an issue we saw with the recent Australian family film Go!, which drew too much from The Karate Kid. As with that film, at some point in the making of this film somebody should have complained that the borrowing was too obvious for the audience to take, and to think of something fresh.

As for the dialogue, many scenes contain clunky exchanges that sound like they’re taken from the page in the screenwriter’s notebook headed “what this movie is about”. It comes over as lazy exposition.

There is also an awkward sex scene that just doesn’t work, on any level. Unless, of course, one of the participants is an idiot.

Whatever woes beset the drama, the film gets into real trouble in the jungle.

Things are fine early on, yet at one point the film’s desire for realism suddenly evaporates and we get one of those battles where the enemy can’t seem to hit anything – not even with heavy machine guns – while our heroes can’t miss anything, regardless of whether they’re taking aim. It’s just poorly staged action.

The film has plenty of other lapses in plausibility and examples of shoddy acting – the bar fight scene, for instance. These all point to the film being a case of a good idea poorly executed.

And we’ve seen this before.

Given how far we are into the 21st century it is worrying that we are still seeing Australian films that look and sound like they went into production too soon, or with too little money – or both. We had more than enough of those in the 1980s and ’90s. It’s a syndrome that should be a faded memory.

And here’s a footnote: the film refers to a psychiatrist named “Freud Lacan”. It’s meant to be a joke but it’s just another example of something in the film that should have been red-lined early in the creative process.