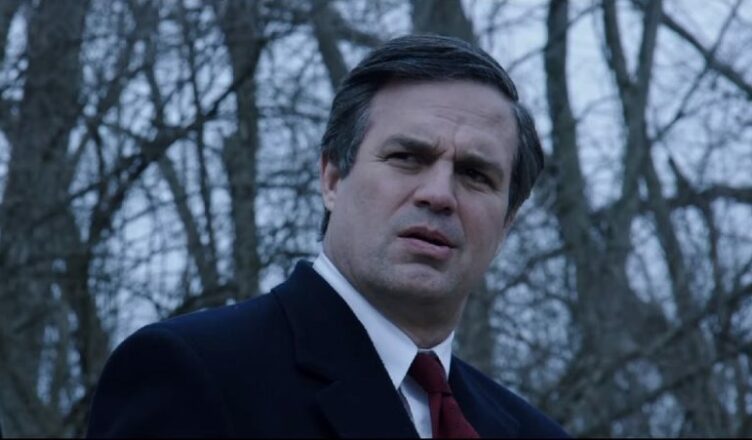 DARK WATERS ***1/2 (127 minutes) M
Anybody who has even a passing familiarity with good lawyer films know how large corporations don’t tend to come out smelling all that sweet once justice has been served.

It’s almost become a cliche, yet so many of these films are based on often harrowing true stories where companies use their might, size and incalculable wealth to fend off, quash and silence ordinary folk who dare to make a fuss.

That tradition continues in Dark Waters, an absolutely ripper legal drama about one lawyer’s battle against the megalithic DuPont chemical company.

Based on the New York Times article The Lawyer Who Became DuPont’s Worst Nightmare, the decades-long tale takes flight in the 1990s when unassuming Cincinnati lawyer Robert Bilott (Mark Ruffalo) reluctantly takes an unscheduled meeting with a farmer armed with a box of VHS tapes.

The claim by cattle farmer Wilbur Tennant (Bill Camp) is that the tapes prove his water is contaminated, and that DuPont is responsible.

It’s a hard call for Bilott, whose firm makes its living defending big companies and arranging settlements with the aggrieved. But as the farmer is friends with his grandma who lives in the area, he does some off-the-book reconnaissance and is shocked at what he discovers.

Bilott then embarks on a long and winding road of discovery that initially has the support of his boss Tom Terp (Tim Robbins), who acknowledges the principles of corporate citizenship, and at obvious odds with DuPont, whose lead legal guy (Victor Garber) feigns concern.

As the case heats up with more and more cases being uncovered, the enormity of Bilott’s battle takes vivid physical form. Upon asking for documents from DuPont he receives a roomful of boxes stuffed with files.

The tactic (which we’ve seen before) is to intimidate and overwhelm, but it backfires. Driven by his dogged persistence and hunger for the truth, Bilott begins going through each box, allowing him to learn more about the length and depth of DuPont’s misconduct than anyone.

Blessed with strong, restrained direction from Todd Haynes (making an impressive, overdue move away from gay-themed films such as Far From Heaven and Carol) Dark Waters is a compelling legal procedural nailed by a great central performance by Mark Ruffalo.

In contrast to the sensation and histrionics we usually associate with top-flight legal dramas, Ruffalo portrays Bilott as a subdued, meek, bookish soul who prefers prosecuting his case with reason, facts and an unrelenting belief not just in the truth, but in making a corporate giant do what’s morally right. Shouting and fist-thumping righteousness isn’t his style.

While the proverbial David & Goliath conflict at play here is a common dramatic template at the heart of many legal dramas – Erin Brockovich, A Civil Action, Class Action, The Rainmaker, The Verdict – the distinguishing feature that marks Dark Waters is the methodical, measured pacing, which really draws you deep into the story.

The film also plays upon the admittedly dark fascination in seeing how flagrantly giant companies mess with people’s lives, acting with apparent impunity and disregard for public health. It’s as though wealth and influence bestows a sense of entitlement to abuse those who have neither, and the film’s exploration of what went on is as engaging as it is galling. As an expose about corporate malfeasance, the film is especially topical and timely given the findings of the recent banking inquiry.

We also see the personal toll Robert Bilott’s crusade exacted on his home life, his health and his marriage. It is a tad surprising to see an A-list actress such as Anne Hathaway in a relatively small but important role as his wife. She doesn’t get that much screen time, but Hathaway puts in a punchy performance.

The only real quibble is how the film wraps things up a little quickly once Bilott hits the courts and begins putting DuPont executives through the wringer. It would have been good to have a few more minutes of him in full flight in court and at the deposition table. Yes, it is possible for a critic to carp about a two-hour drama not being long enough!

Along with cool, moody cinematography suggesting an eternal winter, the film is spangled with subtle, effective period touches such as internet searches on Alta Vista, firing up Windows 2000 and complaining about bad signals on vintage mobile phones.

So soon after Richard Jewell, Dark Waters is yet another laudable example of how proficiently and promptly American cinema embeds the fortitude and courage of its heroes onto the big screen. The trend has really taken hold over the past decade and has producing some top-line, fact-based films.

And it’s interesting, if not telling, to see that while the film has been the subject of conjecture about how fairly it portrays DuPont, there hasn’t as yet been any legal action.

Dark Waters seems to have popped up suddenly and without much fanfare, so here’s hoping it finds the discerning, adult audience it deserves.