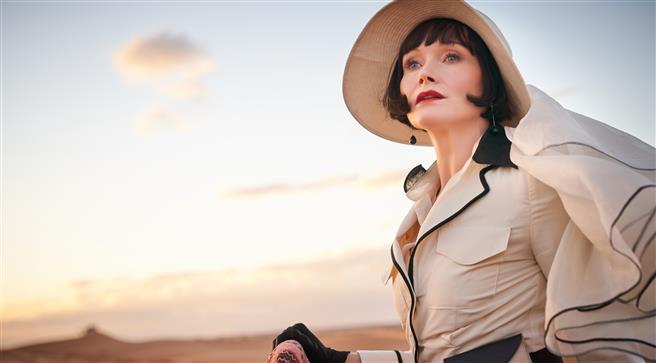 A Phryne mess: Essie Davis reprises her TV detective character Phryne Fisher in ‘Miss Fisher and the Crypt of Tears’.

MISS FISHER AND THE CRYPT OF TEARS * (101 minutes) PG
Given how anticipated this long-awaited film version of the popular TV detective series Miss Fisher’s Murder Mysteries is, it comes as some surprise – and with a considerable sinking of the heart – that the enterprise has turned out to be such a shabby, sub-standard affair.

The loyal fans who have kept the Phryne Fisher franchise afloat since she first popped up on TV in all her 1920s splendour in 2012 are the presumed target market for this film and will likely be the most disposed to forgive the film’s dull plot, pedestrian direction and threadbare production values.

The complicated and increasingly dreary plot sees Miss Fisher (Essie Davis) helping out a Bedouin lass called Shirin Abbas (Izabella Yena), which leads her to getting embroiled with the case of a cherished object that must be returned so a dreaded curse can be lifted. There is also a mystery over the fate of Shirin’s people that must be uncovered.

Now, when a successful TV program proclaims that it is hitting the cinema there is a reasonable expectation that while its essential elements will be preserved, there will also be some appreciable upsizing to justify the upscaling to a bigger, brasher, bolder medium.

That simply doesn’t happen with Miss Fisher and the Crypt of Tears.

To invoke an old line often used in cases of TV shows attempting the jump to the big screen, the film feels like an average episode of the series stretched out over two hours. Diehard fans of Miss Fisher might very well shed a crypt of tears after seeing it.

The reported budget for the film (according to if.com.au) was $8 million, including about a million from a crowd-funding effort.

Now, to put it politely yet bluntly, that figure is something you would need to be told because you certainly couldn’t guess it from the mediocrity of what’s on the screen.

The first 20 minutes of this film are simply painful to watch, suggesting a hastily made low-budget effort.

Some examples: there’s a terrible chase sequence involving the embarrassing use of low-angle shots to mask the fact that nothing in the shot is, in fact, moving; Miss Fisher’s attempt to do something furtive in Morocco is rendered ridiculous by her garish dress; all the men she encounters are stupid; the editing is terrible, with one memorable scene showing a biplane appearing to land on the lawn of a mansion in the space of about a metre.

The international settings for this film feature location shots in Melbourne and Morocco. There is also a long stretch of the film set in London, yet the only sense of the city we get are two very ordinary exterior shots that look as though they were cooked up against a key screen.

Most of the film’s other visual effects (such as the train sequence) also appear second rate. Thanks to American films, which often use VFX work by Australian artists, our eyes are conditioned to a much higher standard than what’s offered here. And, boy, does it show.

And there’s no improvement after that.

Basically, Miss Fisher and the Crypt of Tears looks cheap. It’s not even shot in widescreen, which is a major letdown.

The bland production values might be less noticeable in the home market, where the film will ultimately end up and, presumably, make most of its money, but it sticks out like nobody’s business on the big screen.

Storywise, we have another Aussie mess on our hands. There’s not much wit in the dialogue, and Miss Fisher’s proto-feminist edge simply gets lost in all the blurry plotting. It also doesn’t help the cause much when your heroine has to actually say how she likes to triumph in the face of rules made by men.

And if there is a measure of how this attempt at a big-screen treatment of Miss Fisher flails and fails, it’s in the film’s big reveal, which is so bad it beggars belief.

Not only does it embrace one of the hoariest of all mystery movie cliches, it is heavily signalled throughout the film, thanks to some clunky direction and grave miscasting. Did screenwriter Deb Cox (also a producer, with Fiona Eagger) and director Tony Tilse just run out of ideas?

Even the central performance by Essie Davis as Miss Fisher simmers at the TV level. There’s nothing big or enlightening or surprising or especially cluey about it. There aren’t even any close-ups of that seductive, mischievous face. Glamour is meant to be as much a part of Miss Fisher’s character as smarts, yet neither quality get the emphasis she deserves. It’s bad enough Essie Davis seems to have phoned in her performance, but she could have at least used a modern phone and not one of those old ones from the film’s prop department.

Perhaps none of this matters to your hardcore Miss Fisher fan, especially if they’ve been faithfully following her since acclaimed author Kerry Greenwood created Phryne Fisher in the 1989 novel Cocaine Blues.

For with love comes forgiveness, so perhaps the film’s many flaws and shortcomings will get a free pass from Phryne’s followers.

And she’s going to need them, and a whole raft of new ones, if the planned trilogy of films is to go ahead. Certainly, the film’s first weekend is going to need all that support. Godspeed.

Otherwise, chalk up Miss Fisher and the Crypt of Tears as a candidate for biggest disappointment of the year.