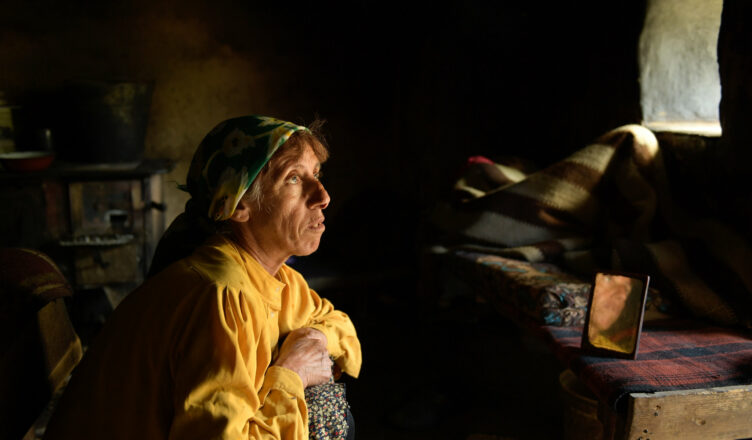 Hard life: The daily grind of beekeepers in the Macedonian mountains is explored in the documentary ‘Honeyland’.

HONEYLAND **** (86 minutes) M
The art of observational documentary is in full flourish in Honeyland, an outstanding example of anthropological cinema by directors Tamara Kotevska and Ljubomir Stefanov who take us into the harsh lives of folk who work lands that are remote and unforgiving.

In the rocky mountains of North Macedonia Hatidze Muratova eeks out a meagre living for herself and her aged, invalid mother by harvesting honey from several precious beehives.

It’s a bitter, hard life; she lives without luxury or electricity, a battery-powered radio being her only mod-con, provided she can get a signal from her home-made antenna, which is a metal plate hammered onto one end of a pole.

Her only joy seems to be going to markets to sell her wares. It’s barely enough to get by, but she gets by.

Then the new neighbours move in to the shambolic homestead next to her. They, too, want to make honey, along with raising cattle and growing corn.

They bring friendship but also disruption to Hatidze’s life. The neighbour’s plan to make commercial amounts of honey and their bees are likely to attack her bees.

Also, the father does not seem especially skilled in the art of protecting his many children from the many bee stings that inevitably come from such proximity.

And there are bees all over the place. We see a bee land on a toddler’s head, crawl up along the side and deliver a nasty sting. There’s a disturbing shot of a girl with a bloated eye because of a sting. The kids are constantly waving them away, which doesn’t stop the stinging. One boy even reaches breaking point when his father forces him to work the hives with no protection.

The directors and their small crew, including two cinematographers, spent three years filming, amassing some 400 hours of footage. From such a mound of material they have sculpted a visually rich portrait of poor working people whose connection to modern society is tenuous.

The compositions are often beautiful and artistically lit, especially on faces in close-up. This is in perfect contrast to what they are unobtrusively capturing.

There is no narration and much of the dialogue isn’t subtitled, allowing the film’s visuals to tell the stories of these people with impressionistic flair.

We often hear about the healthy benefits of rural life, but it’s got to be said that whatever the benefits supposedly are of having all that fresh, clean mountain air to breathe, the ageing process does not appear to be one of them.

Revealed early in the film is the year Hatidze Muratova was born. Either it’s a mistake or testament to how a hard life of bee-keeping can really take it out of you.