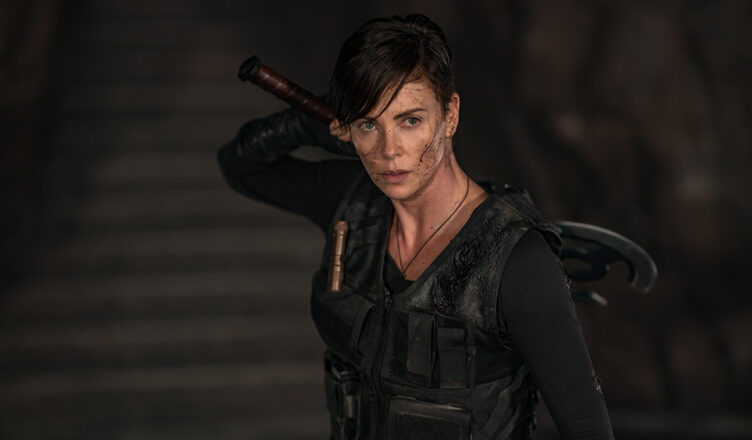 Set to slice: Charlize Theron adds to her action hero cred in ‘The Old Guard’.

THE OLD GUARD *** (125 minutes) MA
Any remaining gossamer of doubt that Charlize Theron is the day’s reigning female action figure of filmdom are comprehensively blown away in her latest kick-ass adventure in which she shoots, stabs, slices and dices her way through teams of well-armed henchpersons.

She’s proved herself a femme-warrior to be feared in Aeon Flux, Atomic Blonde, The Fate and the Furious and as Furiosa in Mad Max: Fury Road (talks of a Furiosa spin-off continue).

Here she’s so good she not only handles guns like a pro, she’s one mean mother with an axe, regardless of whether the axe is the special one she carries around as a signature weapon, or a firefighting axe she grabs off the wall.

In The Old Guard Theron plays Andy, an unageing 1000-year old super-being in charge of a team of so-called immortals who have been fighting the good fight for centuries.

Bullets and swords don’t kill them, they only slow them down momentarily as their wounds heal, which includes spitting out bullets (a nice touch), so they can get back on their feet to kill whomever is left in the room. (A nod here to Vin Diesel’s snappy sci-fi film Bloodshot, which worked a similar idea.)

Having slogged and slashed her way through thousands of battles, Andy has come to the sad conclusion that all their good intentions have added up to nothing.

She looks around and just sees a violent, uncaring world becoming ever more so. She also lost a great friend and companion in the middle ages who was locked in an Iron Maiden and tossed into the ocean.

She misses her terribly, and feels the guilty heavily. On top of all this is the realization that she and her colleagues are, in fact, not immortal. As they get older, wounds take longer and longer to heal until they don’t.

The arrival of a new member to the team, Nile (a very good KiKi Layne from If Beale Street Could Talk), coincides with the emergence of the film’s major villain, Steven Merrick (Harry Melling, Harry Potter). He’s a big pharma titan eager to have Andy and her crew captured and locked in his lab so he can unlock their DNA for the good of humanity, and a little profit.

Though there is nothing in The Old Guard to match what we saw in Atomic Blonde, the action sequences are fairly well-mounted and regular enough, consisting mainly of heavily armed, armour-clad men with weapons at the ready getting off a few body hits before being capped in the head.

Blended into all the mayhem and muzzle flash are a few surprisingly well thought-through personal sub-plots. All credit to director Gina Prince-Bythewood (who did the beautiful, unheralded Love & Basketball back in 2000), working from a screenplay by Greg Rucka, who makes them feel like key parts of the story, rather than like add-ons or afterthoughts.

The most notable scene involves Andy’s nihilism being unintentionally challenged by a random encounter with a modest suburban pharmacist. In gingerly tending to Andy’s wound, this anonymous character embodies the kind of selfless altruism and good heart Andy is in fear of losing in herself. It’s quite a touching moment, and wholly unexpected.

There is also a terrific moment where one of the team is taunted by a nasty captor about being homosexual. Rather than being intimidated, his response is a piercing, poetic smack in the face.

It’s a beautiful minute and a prime example of how to make a progressive point in a modern motion picture without having to get all woke about it. Weave it in deftly and make it part of the story, don’t lecture the audience. The scene provides a great “teachable” moment by emphasizing the primacy of narrative.

The same applies with having most of the marines in the Afghanistan sequences early in the film being played by women. There’s no big deal made about it, they’re just there. And when they are given orders, they follow them immediately as any good soldier would, regardless of their superior’s gender.

That said, if only we could have been shown that a good proportion of the henchpersons killed en masse by our heroes weren’t men. And never mind bad guys, why can’t we have more bad girls, like the super-cool one Theron played in F8? Come on, Hollywood. You can do it.

As an action spectacle the film proves sufficiently satisfying, though plot-wise there is no real resolution to the dilemma raised in the story about the ethics of medical technology and research, a issue that is left flapping on the table like a freshly hooked flounder.

Merrick, the pharma chief, argues that the violence he deploys to subdue the immortals is justified by the good he will do humanity from all the treatments his scientists will be able to develop from their DNA. In other words, that ends justify means.

Merrick admits he has a profit motive – as would any big company chief – but that’s supposed to be the worst thing about him, which doesn’t really qualify him as a villain. (Unless you count capitalism as a high crime, which it isn’t. Not in the free world, anyway.)

Nor does he have any evil intent with the medical products he will produce and sell. He wants to help the unwell of the world and make some coin in the process.

So, like a lot of latter-day Bond villains, Merrick is not that bad a baddie. And at least he has some vision, which is more than you can say for Andy, whose nihilism is offset somewhat by the late discovery that those she has saved have gone on to do great things in the world.

By any fair measure it’s a bit of a rickety finale. It’s also never explained why the super-rich Merrick has never bothered forking out a few dollars to get his teeth fixed.

Still, it all holds together well enough to end with the strong promise of a sequel, which Theron, who also produced The Old Guard, has said she’s keen to do.

More power to her.

The Old Guard is now streaming on Netflix.