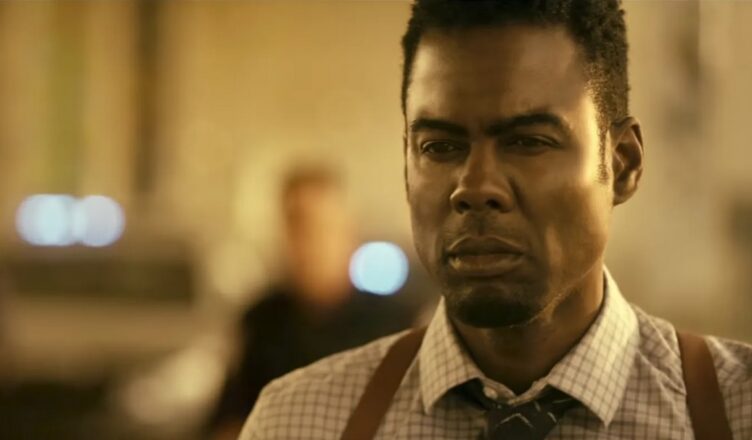 In serious mode: A scowling Chris Rock is on the hunt for a copycat killer in ‘Spiral’.

SPIRAL: FROM THE BOOK OF SAW *** (93 minutes) R18+
Of all the things the world needs right now, a ninth Saw movie wouldn’t rank all that high given how exhaustively milked the serial killer premise was across the life of the franchise.

Yet here we go again with an attempt at a Saw reboot and, to be honest, it’s a pretty good, if disposable, effort with just enough gore and dismemberment to keep hardcore fans of the genre and the franchise happy.

The central premise has been respectfully preserved, being that of a vengeful, game-loving serial killer who ensnares victims in lethal traps, then offers them a way out that involves a gruesome sacrifice.

The neat twist with Spiral, which involves a copycat murderer inspired by the original Jigsaw killer (played by Tobin Bell; credit where credit is due) is that the whole shebang is seen from the point-of-view of the cops investigating the crimes rather than the victims.

With a scowl permanently etched on his face to signal that he is in serious mode, Chris Rock plays Detective Zeke Banks, a lone wolf police officer who once turned in a dirty cop, an act that got him decorated and made him widely despised. He lives in the shadow of his legendary father (Samuel L Jackson), who now owns the apartment building in which Banks lives.

When his good friend and fellow cop is creatively dismembered in a train tunnel Banks insists on running point on the investigation, which reveals another Jigsaw is on the loose with a morally motivated vendetta.

There are a few gratuitous spots early in the film where Rock cracks wise as though the film is a comedy – his opening diatribe about Forrest Gump is pretty funny, if wholly unrelated to the story – but one he settles down and plays straight he actually does an OK job.

Clearly Rock has twigged that while being a motormouth works for comedy, his acting improves when he dials down his verbosity. Oddly, Rock – a huge Saw fan who hungrily pursued the making of Spiral – identified a lack of humour in the previous films and said how this film would be peppered with comedy.

Well, it’s not. It might be the case that something happened at the test screenings, because after some initial gagging, the film plays it fairly straight. Maybe they found that gags drained the tension so cut them out. Just guessing.

Having made Saw 2, 3 & 4, director Darren Lynn Bousman again demonstrates slick proficiency with Spiral, especially when it comes to the pay-off moments, which includes some beautifully foreshadowed reveals.

Of course the film follows a formula, but thankfully Spiral – written by Josh Stolberg (Jigsaw) & Peter Goldfinger, though Rock apparently had a hand in – adds a good dose of misdirection into the mix.

The film ends with a large pointer to a sequel, which is being planned, though whether Spiral will breath new life into the franchise will obviously depend on its reception.

And while we’re not exactly pining for more Saw, it wouldn’t be the worst thing in the world if Saw fans embraced this respectful reboot.

Oh, and here’s another cool thing about Spiral: knock six minutes off the official running time for the closing credits and you’ve got a nifty slasher film that takes care of business in a swift 87 minutes. And that’s clocked.

Footnote: For the uninitiated, the Saw series began in 2004 with the original Saw, created by Melbourne filmmakers James Wan (director) and Leigh Whannell, who co-wrote with Wan. (Leigh Whannell and James Wan are credited as executive producers on Spiral.)

We then saw a new Saw dutifully churned out like clockwork in time to service the thrill-seeking Halloween date-movie demographic until 2017’s Jigsaw.

Each low-budget film (around $US10-20m a pop) was not only a hit, the franchise was cleverly pegged to a blood donation campaign that proved hugely successful, if a little macabre in concept.