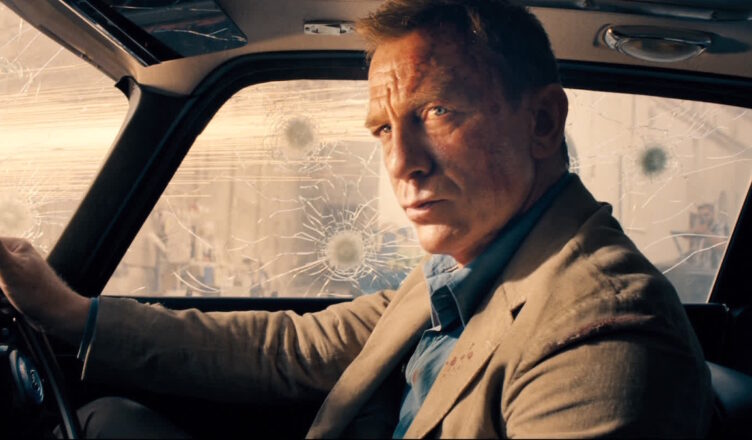 Ready for action: Daniel Craig is back as James Bond in ‘No Time To Die’.

NO TIME TO DIE ***1/2 (164 minutes) M
There’s that moment in every Bond film where 007 confronts the villain of the piece and engages in a verbal showdown. It usually involves the bad guy’s evil plans to take over the world, or destroy large parts of it. Sometimes it’s classic stuff, sometimes not, but traditionally the exchange is a prelude to lots of running and shooting and exploding.

In No Time To Die that signature scene is something special.

The world is still at stake, of course, but this time around there’s more at stake for Bond – a lot more – and it’s possibly more important to him than the rest of the world.

And we care. We’ve never seen James Bond behave like this in the presence of a villain; the whole shebang has been leading up to it and it’s quite an achievement that the film pulls it off with such emotional force.

It’s one of the things that ranks No Time to Die as one of the best, most satisfying Bonds yet, and the second best in the five-film Daniel Craig canon, after Skyfall.

His physique is still in top shape, yet the creased visage of the James Bond greeting us here speaks to his fiftysomething vintage and contented state of being. His signature scowl is gone.

Relaxed, happy and only occasionally looking over his shoulder, Bond is retired from the service, happily living with Dr Madelaine Swann (Léa Seydoux) in a magnificent house ensconsed in the winding narrows of a highly photogenic, somewhat vertiginous Italian village. MI6 clearly has a great superannuation plan.

Alas, the evil of the world just can’t leave Bond alone; his franchise-long CIA buddy Felix (played here by Jeffrey Wright) comes calling to tell him of a new global threat: it’s a frightening, admittedly ingenious biological weapon, a DNA-targeting killer virus that has the potential to annihilate both entire populations and select persons within it.

So off Bond goes with his scowl back on his face, gadgets at his fingertips and plenty of high-powered henchmen on his back. It’s familiar terrain, but thankfully

What makes No Time To Die a genuine step-up for the Bond franchise is that it actually has a great character story, one you can truly invest in.

While its 164 minute running time (including the lengthy end credit scroll) makes No Time to Die the longest Bond so far, all but the most easily distracted and impatient will appreciate the time the film takes in developing Bond’s emotional life.

More than any other film in the franchise Bond has so much on the line here, his need for love and responsibility accounting for the most emotionally affecting scenes we’ve yet seen in a Bond film.

It even gives some of the action added edge where it’s not just his skin he needs to save, not just a matter of surviving another chase or gunfight.

For so long his devotion to Queen and country has soared above all else. He’s still got love for the homeland and its values, as embodied by MI6 head M (Ralph Fiennes), but with cracks in the establishment he has served so long appearing before him, Bond’s devotion might now be superseded by a new priority, one he will do all to protect and preserve.

Performances throughout are captivating – how often do we get to say that about the quality of acting in a Bond film? – with Craig embedding added layers of anger and desperation as Bond works through a plot that is involved and decidedly complex, but never confusing.

Opposite him, Léa Seydoux provides the necessary emotional counter-weight, giving the film the heart that keeps Bond adrenalized, focused and lethal.

Christoph Waltz (Inglourious Basterds; Django Unchained) returns briefly as Blofeld, giving us a better rendition of the villain in his short time on screen than he did in 2015’s mediocre Spectre.

For the most part Cary Joji Fukunaga has done a very good job steering No Time To Die to new heights. He’s the latest in a long line of directors to take the giant step from small films straight into the mainstream with a major title.

He does stumble, nonetheless.

Regrettably, the action in No Time To Die is a very mixed bag as terrific, exciting, large-scale sequences grind against some pretty ordinary moments where Bond-born cliches rule.

On the upside, it’s great to see how digital technology has allowed for the rendering of vehicles that is now so photo-realistic – thanks, by the way, to the Fast & Furious franchise for pushing this particular envelope – that they can be tossed and twirled around with unparalleled precision and with real analogue grit.

Consequently, in No Time to Die we see action scenes with camera moves and editing that would have been impossible in the pre-digital movie age, even though it has the look of a pre-digital film. Makes you glad you lived this long. Bravissimo!

Unfortunately, there’s an issue. It’s a quibble, sure, but it’s a major one, the cinematic equivalent of having a stone in your shoe.

For all its high-end achievements, No Time To Die recruited its security guards and henchmen from the same place as almost every other big-scale action film.

You know these guys by how their inability to shoot straight is matched only by their uncanny ability to catch any bullet fired at them, however haphazardly, resulting in instant death.

So easily do they fall, at times it’s a wonder why Bond bothers to aim his weapon at all. In fact, there is one scene where Bond dispatches a swathe of henchmen merely by pointing his gun in their general direction. Every time he shoots, he scores. And, of course, he never gets hit.

It plays like parody, as if there’s a missing scene where Q (Ben Whishaw) gives Bond a bracelet that automatically emits a force field during gunfights that will deflect any bullet fired at him.

What makes these flubs especially annoying is that the film works so hard early on to establish how vulnerable Bond is in this film to a breed of bad guys who are especially lethal. Then it just gives it all away.

This action-movie cliche is one the Bond franchise is largely responsible for creating, so it’s disappointing the franchise hasn’t managed to rise above it.

Even the Star Wars prequels managed to toughen up the Imperial droids from the easily dispatched tin men in Phantom Menace to the much more resilient and aggressive ones featured in Attack of the Clones.

Having now laboured that point to exhaustion, here’s hoping the next Bond film gets its security goons and henchmen from a better agency.

It’s the one improvable aspect in an otherwise excellent outing.

Footnote: No Time To Die is meant to be Daniel Craig’s final turn as James Bond. But as Sean Connery said, never say never.