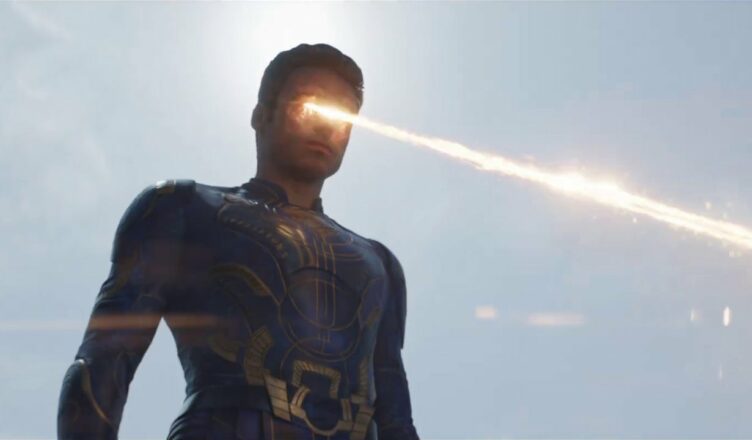 Wow. Haven’t seen that before: A superhero shoots beams from his eyes in ‘Eternals’.

ETERNALS * (157 minutes) M
Oh, dear. What a blow. There was Space Jam: Legacy, secure in the knowledge that its icy grip on the glittering Worst $200 million Hollywood Film of the Year award would go unchallenged.

Now along comes Eternals, the latest hollow epic from Hollywood as Marvel Studios raids the lower tiers of its roster of superheroes to squeeze out a yet another hollow, utterly forgettable FX-fuelled epic.

Sluggishly directed with an astonishing lack of regard for clarity or pace by Chloé Zhao, Eternals is a thunderously dull bland-out stuffed with all the things we’ve seen quite enough of: fights with big-jawed monsters; eyes that shoot energy beams; self-important longueurs; an all-but-incomprehensible story. Seriously: enough.

At 157 minutes – that’s 10 minutes longer than Apocalypse Now – Eternals should also be known as The Film That Would Not End for its cumbersome attempt to deliver unto a weary, superhero-stuffed audience no fewer than 10 new superheroes.

Lodged into human affairs in the year 5000BC by a giant, six-eyed, deep-voiced, barely intelligible God-like entity called Arishem (looking uncannily like The Iron Giant), the Eternals are tasked with defending humanity against The Deviants.

Tagging along with them in the modern era is Karun (Harish Patel), a business associate of Kingo, who has blended in to modern society by becoming a Bollywood star.

While the rest of the Eternals are trying to save humanity from a extinction level event – thank you Deep Impact! – called “The Emergence” it is Karun’s job to tag along and video everything.

He is by far the most interesting character in the film. Where’s his film?

And what are The Deviants? Mash together every CGI movie monster you’ve seen in the past 10 years and there you have it.

While trying to unpack its tangled narrative, the film also tries to impart enough information about each of the new superheroes to engage our emotional interest. No sale. The only one that vaguely comes close is Sprite, the youngest of the Eternals who pines for normal human life.

The rest of the film is just a scramble of confusing exposition, not aided by all the time skipping the story, going backwards and forwards through history.

Not helping the viewer experience are the film’s expensive boom-crash visuals that spew forth a cascade of rote effects that lack inventiveness and do nothing to build any tension or excitement. Again, there ain’t nothing here you haven’t seen before.

And here’s a question: why has Marvel stuffed 10 new characters into one film? The studio has done so well with its TV shows, why on earth didn’t it do Eternals as a 10-part TV series, focusing on one character per episode? Surely Marvel could have covered that for the $200m it’s wasted on this dirge.

As for what distinctive qualities director Chloé Zhao was meant to bring to the project, it has all been lost in the muddle. A mere two years ago she gave us the haunting, Oscar-winning Nomadland. Now this mega-turkey. Here’s hoping Zhao regains her bearings and gets back to making movies about people.

But never mind all that. All anyone should be preoccupied with is how Eternals fits in to the oh-so-important framework of the Marvel Cinematic Universe, meticulously constructed by all the previous Marvel movies.

We know of the devotion hardcore Marvel fans have to the franchise and they will no doubt expend much time and energy seeking out the data drops that places the film into the Marvel myth.

To these ardent souls must be extended all goodwill and Godspeed. It is to them Marvel owes a debt that allows it to make terrific big-screen spectacles such as Thor 3 and Endgame as well as crank out films as terrible as Eternals.