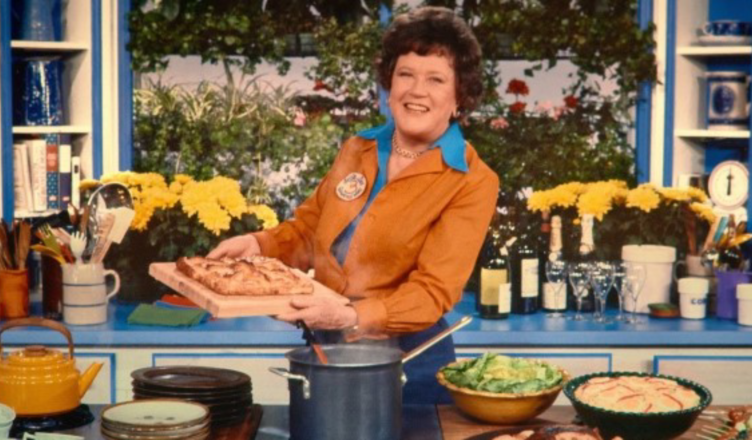 Hail to the chef: TV and cookbook icon Julia Child is profiled in ‘Julia’.

JULIA ***1/2 (94 minutes) M
Everything you ever wanted to know about cookbook pioneer and TV cooking show icon Julia Child is skillfully crammed into Julia, a lovingly made cinematic love letter designed to provide an entertaining, enlightening, comprehensive cross-section of Child’s remarkable life and accomplishments.

And you get it all in the time it takes to roast a chicken.

Sleekly directed by Betsy West and Julie Cohen (RBG), the film is an elongated, colourful, occasionally thorny tribute to a strong-minded, stereotype-defying career woman who, in the face of having all the creature comforts any woman in the 1950s could possibly want, chose the road less travelled.

Raised in a conservative, wealthy family and married to her singularly devoted husband Paul, Child was all set to live a luxurious life of leisure and privilege.

Yet it was a simple meal she had while living in France that ignited her passion for culinary adventure and desire to enrich meal time for American households.

In the boom of the post-war era when processed foods and TV dinners occupied an out-sized place at the heart of consumer culture, Child proposed to introduce the idea of home-made haute cuisine into the mainstream.

It took 12 years and a titanic struggle with publishers who under-estimated the popular appeal of a Bible-sized cookbook, but Child eventually unleashed her legendary Mastering the Art of French Cooking. The tome – still in print since its 1961 debut – is widely heralded as the starting gun for the cookbook craze that continues today.

Still, the film posits how her influence on public television was an arguably greater achievement, one to which all TV cooking shows can be sourced.

The plethora of archival snippets of Child at work are a joy to behold, especially the early footage. With meagre resources in a demonstration kitchen in front of cameras the size of refrigerators, we watch how Child conducted cooking lessons in one take.

With very funny photos revealing how her crew rendered invaluable assistance by cramming into fridges and squatting behind counters, Child championed the values of fun and imperfection.

Showing great wit she would ingeniously transform an on-camera flub into a new dish, her affable style promoting cooking as a delight to be shared, not a chore to be endured.

Rather than reinforcing the domestic role of women, the film pulls focus on the feminist values Child embodied in her work as a TV presenter, author and celebrity. Her business acumen and media smarts were formidable; she was not somebody to push around.

Interviews with friends and associates, as well as archival audio of Child (who passed in 2004, age 91) show how she was the first person to push back at the sexist attitudes of male-dominated commercial kitchens. “Where are all the women?” she decried.

Made with the full co-operation and endorsement of the Julia Child estate, Julia nonetheless shows how domineering and flawed she could be.

In one surprising segment, we learn of Child’s attitude to homosexuals, something that was transformed when a close gay friend of hers died of AIDS.

Replete with fascinating detail, the film succeeds admirably in its dual purpose: to fully appreciate what Julia Child achieved; and to make sure that the 2009 Meryl Streep film Julie and Julia is not the only movie reference people have for this cultured, culture-changing woman.