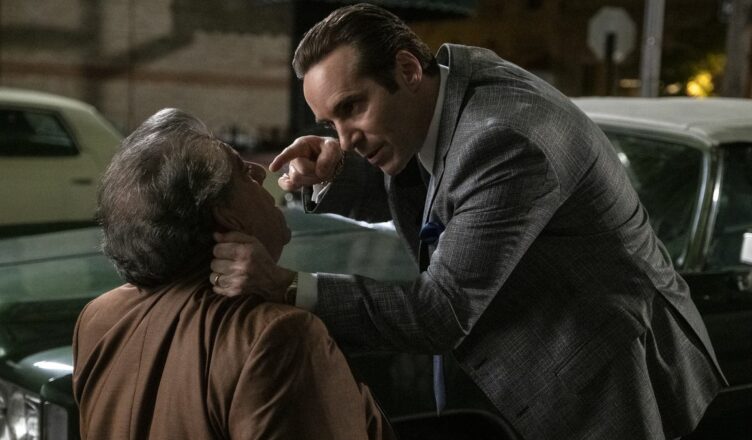 Listen up: Uncle Dickie (Alessandro Nivola) makes a point in ‘The Many Saints of Newark’.

THE MANY SAINTS OF NEWARK *** (120 minutes) MA
Although we meet the young version of Mafia patriarch Tony Soprano in The Many Saints of Newark, the film – a solid, stand-alone, gangster saga set in the late-1960s & early-1970s – does not really provide all that much backstory to the character made famous by the late James Gandolfini (who passed in 2013, age 51) in David Chase’s neo-classic TV series The Sopranos.

Indeed, it’s not until the final stretch of the film that we eventually get to see those critical formative moments that impacted the teenage Tony (played very ably by Gandolfini’s son, Michael) and reformatted his brain.

In a nice bit of character colouring, we see how Tony is (or was) keen to eschew his family’s deeply embedded crime culture and go to college, even though he’s far from being a model student; at one amusing point he tries running a gambling racket in the school corridors.

It’s also in the climactic run of the film that veteran director Alan Taylor – Mad Men; Lost; The West Wing; Six Feet Under; Boardwalk Empire; Game of Thrones; and, of course, The Sopranos – delivers a scene of impulsive violence that fans of the series will recognize as one of its more brutal hallmarks.

And though Soprano stalwarts will appreciate that stratum of detail and character nuance laid into the narrative especially for them – there’s no faulting the film for the new crime of “fan service”, a cosmically idiotic term – Many Saints works very well as a straight-up crime drama for the uninitiated or those who know the series more through reputation than from watching it.

Initially set in 1967 at the time of the race riots that tore through Newark, we meet the very young and chubby Tony (William Ludwig) as a minor character in the story of his uncle Dickie Moltisanti (Alessandro Nivola).

He’s just welcomed back his semi-legendary father (Ray Liotta, GoodFellas) from the old country, who has a beautiful new wife Giuseppina (Michela De Rossi) with whom he wants to have another family.

Some trouble between father and son over Giuseppina, however, sees Dickie seeking counsel from his father’s imprisoned twin brother (Ray Liotta again).

As Tony’s dad Johnny (Jon Bernthal, a terrific character actor who deserved a bigger part) is carted off for a four-year stretch, small-time Soprano associate Harold (Leslie Odom Jr from Hamilton) enters the fray as a possible rival in the local numbers game.

There are a lot of criss-crossing story threads vying for attention here, and at times the film meanders when it should coalesce.

Still, it does belatedly come together to deliver a dramatically strong, slightly unsettling one-two punch of a finale that brings teenage Tony to a crossroads, where he ponders which irreversible course through life he will take.

Visually, the film is flush with period detail and has a rich cinematic gleam, echoing the great lighting and camerawork of the series.

If nothing else, the film serves as a reminder of just how bold and cinematic The Sopranos was, being one of the first long-form prestige series to take seriously the fact that most people would be watching the show in widescreen on big TV monitors, not in the old square 4:3 format. That’s but one of the reasons the show remains such a landmark.

And there might be a sequel to the prequel. According to Wikipedia (the source of all wisdom), the desire by David Chase to do a follow-up has been embraced enthusiastically by Many Saints co-writer Terence Winter, who worked on The Sopranos and was responsible for Boardwalk Empire.

Based on what they’ve given us here, may they proceed with all speed.