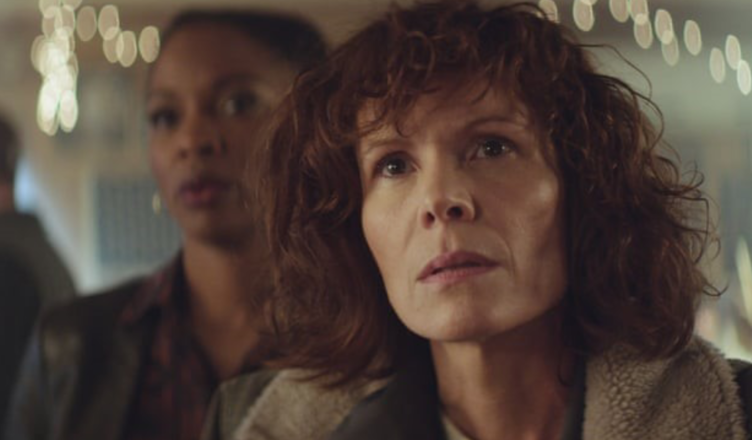 DISAPPEARANCE AT LAKE ELROD * (104 minutes) MA
The whole point of having a “big reveal” in a mystery movie is to draw you deeper into the story, not have you wondering whether the cameras rolled too soon on a screenplay that needed a few more drafts.

And that’s not the only spot of bother in Disappearance at Lake Elrod (also known as Through the Glass Darkly), a strained, cliché-ridden by-the-numbers missing person mystery that can’t make all the pieces of the puzzle snap together the way a good mystery should.

Set in a small southern town in Georgia – that American state where local law mandates that everybody speaks with a twang – a bedraggled mother staples a home-made missing person poster onto a pole.

This is Charlie (Robyn Lively) whose eight year-old daughter remains missing despite an extensive search of the area immediately after the event occurred. The trail has since gone cold and Charlie is angry as all heck at the local cops for not doing more.

When a teenage girl goes missing Charlie is convinced the two incidents are somehow linked and embarks on her own investigation, with help from with story-hungry journalist Amy (Shanola Hampton).

It’s familiar amateur sleuth territory, which is fine; we all like getting wrapped up in a cheesy, well=plotted mystery, even if the sign-posting is a little obvious and predictable.

There is, however, only so much forgiveness you can extend to a genre film that is striving to deliver a decent little thriller.

You can overlook the odd flub but once clues literally start jumping out in front of our DIY detectives you really have to wonder whether the narrative needed more work. Contrivance is one thing, but what happens here is a step beyond and it makes the whole shebang just too hard to swallow.

Plot plausibility evaporates in these clumsily directed moments, disengaging you from the film as you think: “shouldn’t these characters be working harder for the information they need?”

Directed by Lauren Fash, who co-wrote with Susan Graham, the film begins well thanks mostly to the performance by Lively, who brings notes of desperation to Charlie, but it gradually degenerates as the clichés overtake the characters.

The film really needed more invention, an issue accentuated by the poorly handled left turn it takes half-way through.

As for the awkward let’s-explain-everything-in-one-scene climax, the stumblebum exposition might just have you rolling your eyes, thinking that the film might also be suffering from some critical miscasting.

As any good mystery demonstrates – such as the 1996 noir classic Fargo – it doesn’t matter how complicated a plot gets, the story threads all need to come together in a way that is believable and satisfying.

That just ain’t the case with Disappearance at Lake Elrod.

The film is streaming on these platforms.