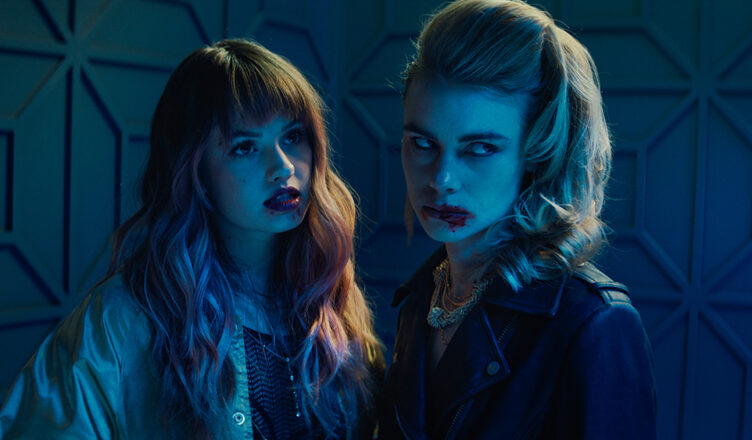 Turns out the passengers, Blaire (Debby Ryan) and Zoe (Lucy Fry), are hot-to-trot vampire femmes on a mission to munch on some business rivals to allow a vampiric takeover of the city.

As the hapless driver Benny, Jorge Lendeborg Jr. brings some performance spice to the proceedings, which has some nifty story twists as the vamps chew their way through their victims.

With plenty of good-natured gore and a touch of torture, it’s a competently, if unremarkable time killer, nicely mounted, totally congenial.

Think of Night Teeth as the type of congenial, easily digested vampire movie you can watch while doing the ironing.

Directed by Adam Randall, written by Brent Dillon, the film could have done with being 10 minutes shorter and making the vamps a bit sexier. Look fast for the cameo by Megan Fox (Till Death). Good to see she’s still kicking.

HYPNOTIC * (89 minutes) M
It is often quite distressing to see obviously talented actors throwing everything they have to make work a story that lacks any tension or imagination.

So kudos to Kate Siegel who gives her all in Hypnotic, a dire attempt at a psychological thriller so mired in predictability you often wish for a zombie apocalypse to liven things up.

He’s a susser-than-suss head shrinker whose brutalist-style office is so ominous the only thing missing is a big blue flashing neon sign saying “The Predatory Psycho Is In”.

In trying to sort through her messy mind, Jenn discovers she is more willing to submit to the power of hypnotic suggestion than she ever knew. She starts suffering from blackouts.

If only there was at least one decent surprise or shock or idea in the film one could happily tag Hypnotic as a bit of trashy entertainment.

But when you can see precisely where it’s going long before the characters do, enduring the whole thing becomes a challenge that might just put you to sleep more efficiently than the dreaded Dr Meade.

By the way, why is it always the woman who finds herself on the wrong end of this sort of deal? Couldn’t they have dialled things up by reversing the genders, or making the shrink a woman as well?

That might have made it worth sitting through. Just a thought.