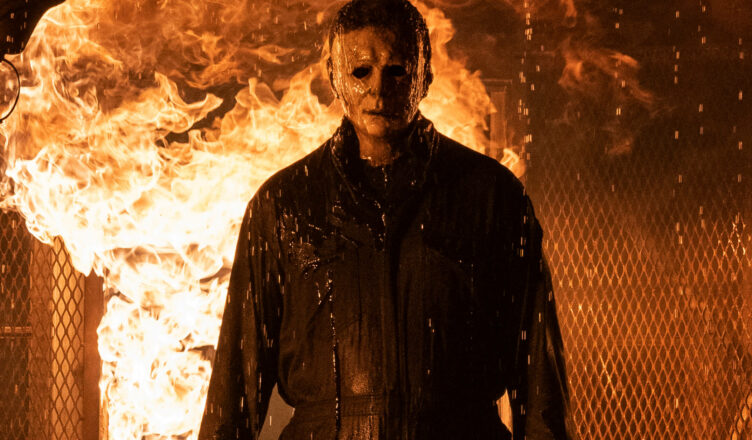 Hi everybody!: Michael Myers is back to slash again in ‘Halloween Kills’.

HALLOWEEN KILLS **1/2 (105 minutes) MA
For those fans of the Halloween franchise who are finally catching up with the rest of the world’s filmgoers, who have long known about how repetitive and predictable the films have become, some good news: the latest offering has a heartening splash of slasher movie innovation.

At its dark heart it’s still the same old deal, of course, with the masked, mentally deranged Michael Myers still killing everyone he sees.

Only now he’s got the well-armed citizens of Haddonfield, the unfortunate small town that Myers has made his killing ground of choice, to contend with. And, boy, are they motivated, declaring that the Michael Myers reign of terror shall end tonight.

But Michael is as tough a customer as ever. Not even a fire-fighting crew can stop him as he stomps through the town, racking up his usual body count, hoping to finally include the corpse of Laurie Strode, whom he terrorized in the original 1978 film, and who is still being played by Jamie Lee Curtis.

No great shakes here, for sure, but it is entertaining enough to hold us over until Halloween Ends, which is due October 2022 and is supposed to be the very final installment of the slasher saga John Carpenter started all those sequels ago.

By the way, a quick check of how Halloween Kills has travelled since its US 15 October release at Box Office Mojo shows an ever-so-reliable set of figures:

The film, a low-budget affair that cost a mere $US20 million – about a quarter the cost of an average studio film – has so far taken about $US127 million globally.

That’s a darn good return on investment and is typical of the type of attractive ratio most horror films generate, even the mediocre ones.

It helps explain why we get so many horror films, why they are franchised to the hilt, and why the Halloween series is loathe to get rid of Michael Myers once and for all.

Even if Halloween Ends is meant to be the swan song, it’s a fair bet Michael Myers will live on so long as he keeps bringing in the bums.