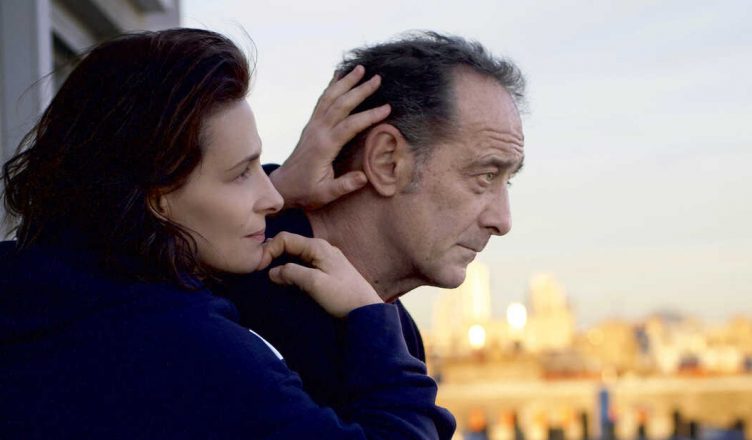 Two’s company: Juliette Binoche and Vincent Lindon in ‘Both Sides of the Blade’.

BOTH SIDES OF THE BLADE ***1/2 (116 minutes; subtitled) MA
Veteran French director Claire Denis hits home with a searing contemporary relationship drama as the happy life of a middle-aged couple is disrupted when an ex drifts into their realm.

Fortunately, he gets a terrific job offer to be part of a exciting new sports agency. Unfortunately, the approach is from François (Grégoire Colin), who used to be married to Sara.

Thus is planted the seed from which a romantic tempest swells, fed by insecurity, suspicion, dissatisfaction and the corrosion of trust as their house-of-cards relationship is threatened by the sudden presence of an old flame.

Showing a Bergmanesque love of close-ups, Denis (who co-wrote with author Christine Angot, based on her novel Un tournant de la vie) fires up the tension between the two as they confront each other’s vulnerabilities.

Fuelling the drama are themes that course through the history of romance in cinema; namely, that the impulsive nature of love respects neither reason nor fairness, and that the security of any relationship, however long-standing or deeply rooted, is essentially delusional and subject to happenstance.

Eliciting powerful, raw performances from her leads – utter conviction from Binoche and Lindon – Denis explores the fissures of their relationship with the precision of a dental drill in a series of progressively heated encounters that sees personal sniping escalate to all-out emotional combat.

A compelling, mature, human drama, Both Sides of the Blade proves how, when you strip it down, all you need for good cinema are palpably real characters in a room relating in a way you can relate to.

TRUE THINGS ***1/2 (102 minutes) MA
At the troubled heart of True Things is a truth conveniently denied by our collective desire for neat character arcs, where a person in a movie evolves in a fairly logical manner over the course of the story, learning things through experience and emerging as a better human.

The convention is deeply set and important to the art of movie narrative, to be sure. But it’s not everything.

In True Things we’re presented with Kate (Ruth Wilson), a lowly desk jockey in a Ramsgate welfare office who appears to have no centre of gravity or sense of direction as she deals with a quarter-life crisis that has robbed her of common sense.

She is a mess of contradictions, her fuzzy thinking and lack of self-regard colouring her everyday experiences.

And what a compelling mess she is, reflecting what imperfect beings we all are, though presumably most people at least strive do what’s best for them. Kate has no such preoccupation.

The advent of an illicit romance with good-looking, job-seeking client Blond (Tom Burke; The Souvenir; Mank) – dating clients is a sackable transgression – holds the promise of some structure and security, but her feeble-mindedness only makes things more uncertain and disorienting.

She just can’t get a fix on her future, can’t even heed repeated cautions to get to work on time, or appreciate her co-worker and concerned friend Alison (Hayley Squires).

Anchored by a magnetic central performance from Ruth Wilson (a co-producer on the film with Jude Law), Kate can be infuriating, both for us to watch and for her friends to deal with as she stumbles through the self-imposed chaos of her resoundingly pathetic little life.

Filmed in the old-school 4:3 Academy format, director Harry Wootliff (co-writer with Molly Davies) deftly maintains sharp focus on the unfocused nature of Kate’s mindset, playing up her emotional ambiguities and rickety sense of self.

Based on the 2010 Deborah Kay Davies novel True Things About Me, the film is a quiet, compelling indie drama from the UK that up-ends a host of movie conventions in a bewitching manner, with the film’s final reel really making you wonder where this woman’s head is at.