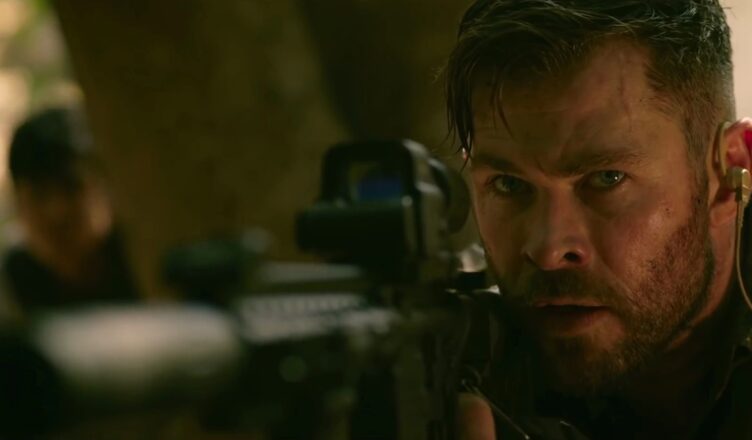 Man of action: Chris Hemsworth blasts his way through the non-stop mayhem in ‘Extraction’.

EXTRACTION ***1/2 (116 minutes) MA
Buckle up! It’s full-throttle, balls-to-the-wall, A-grade action from go-to-whoa as a sour Australian mercenary (Chris Hemsworth) attempts to retrieve the son of an Indian drug lord who has been kidnapped by another drug lord.

The story is necessarily basic to allow the maximum amount of boom-crash action to be shoe-horned into the proceedings – and man does it deliver, though with perhaps a little too much bloodshed and with the body count tallied up Hemsworth’s manic machine gunning and close-quarter double taps enough to rival a civil war.

The jewel in the crown of all the masterfully orchestrated mayhem as Hemsworth and his quarry charge through the streets is a truly jaw-dropping, breath-taking, brilliantly conceived set piece that combines fire fights, fist fights, car chases, foot chases and even falls from buildings into a continuous sequence that goes for about 12 minutes.

Know as a “oner”, the set-piece comprises of several separately filmed action scenes that are seamlessly blended together to create the illusion that the camera captured the whole thing in one take. Truly marvellous stuff, and another testament to the artistry possible with digital filmmaking. Other recent examples of great action “oners” were in the John Wick films and the underrated Charlize Theron film Atomic Blonde.

Hemsworth, for his part, is a nice, tight fit for the role of action hero – or should that be anti-hero? – Tyler Rake, handling his weaponry with flair and his fights with gruff balletic grace.

He also takes enough punishment through hits and gunfire to avoid the tag of being a bullet proof cliche. OK, he seems to have remarkable aim that drops adversaries at a frightening rate, but he is a hero that bleeds.

He also feels. As he takes his young charge (played by Rudhraksh Jaiswal) through, and often under, the streets towards sanctuary he begins bonding with him. We also get flashbacks pointing to Rake’s painful personal history. So it’s not just about fight choreography: Hemsworth actually puts in a performance.

Easily one of the best straight-up, no-nonsense B-grade action films we’ve seen in years, the shebang is the first to be directed by veteran stuntman Sam Hargrave. The film was written by Joseph Russo who, with his brother Anthony (aka The Russo Brothers) also produced the film with Hemsworth.

The Russo Bros also directed the Marvel Universe films Captain America: Winter Soldier/Civil War and Avengers: Infinity War/Endgame. Hargrave worked on all of them and Hemsworth is, of course, Thor.

Now, that kind of pedigree doesn’t automatically mean you get a good movie, but it’s pretty clear in this case that they were all on the same page in delivering a first-class knockout action movie. It certainly furthers the case for there to be an Oscar for best stuntwork or best action film to honour the huge effort and artistry that goes into making these crowd-pleasers.

And here’s an amusing footnote: Extraction has been the subject of some low-level grumblings accusing it of being a “white saviour” film, in that the creators and the hero are white though the film’s location is not.