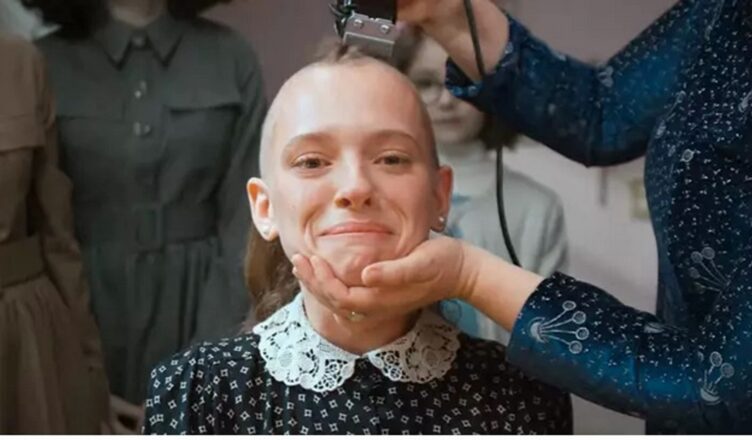 Close shave: Esty (Shira Haas) discovers that Hasidic life is not for her in the four-part drama ‘Unorthodox’.

UNORTHODOX **** (four episodes; 212 minutes) M
The chief piece of advice you need to heed when embarking on the remarkable journey that unfolds in Unorthodox is to stick with it.

The increasingly engrossing tale of a young woman’s escape from the confines of life in the New York’s Hasidic community is slow – perhaps too slow – to start, but tensions grow as the stakes rise and the quest for personal liberation evolves into a matter of life and death.

Try as she might to fulfill her obligations to the stricter-than-strict customs of her people, Esty (Shira Haas) is unhappy in the arranged marriage she has with Yanky (Amit Rahav), a mother-whipped man with a spine of jelly.

Seen as “defective” and with no support from her peers or from the all-powerful elders, Esty flees New York for Berlin where her former-Hasidic mother Miriam (Delia Mayer) lives. She makes friends with a circle of cool young people who embrace her. Despite hardships that see her sleeping rough in a strange city, Esty finds warmth in their friendship and hope in her application for a music scholarship.

In hot pursuit come Yanky and his street-wise cousin Moishe (Jeff Wilbusch) who are tasked with bringing her home to do her duty.

While Moishe is willing to use whatever means necessary, including guilt and the accusation of betrayal, Yanky’s exposure to the outside world his wife has escaped to plants doubts in his mind about whether the presumed moral righteousness of their mission can stand the light of day.

Told in dual narrative mode, Esty’s escape to Berlin is peppered with flashbacks revealing her arranged marriage and gradual alienation from the community, which is brutal to say the least.

Given what Esty goes through, Unorthodox is no advertisement for the hardline Hasidic lifestyle of servitude and submission. With her value as a human being measured only by her ability to get pregnant, Esty’s motivation to escape is strong, even though she still holds on to some of their beliefs.

Strong as the premise is, Unorthodox takes a while to find its feet, the two concluding episodes being where the gravity of the story belatedly kicks in.

As the savage efforts by Moishe and Yanky to locate her heats up – the threats issued to a hapless tenant is especially cruel – Esty is striving to hit square one of her new life.

But will she make it? It’s quite an emotional nail-biter thanks to some exceptional direction from Maria Schrader who delivers a memorable finale that has the feel of a gripping detective thriller as it homes in on its pay-off.

Performances throughout are finely etched and nuanced, with Delia Mayer as Esty’s mother Miriam a real stand out. Having fled the community herself leaving Esty behind, the desperation she shows in trying to cut though their shared trauma and reconnect with her resentful daughter are among the most moving scenes in the series.

Still, it is upon the slender shoulders of Israeli actress Shira Haas that Unorthodox rests and her performance is truly superlative.

With her diminutive frame used to highlight her vulnerability, Esty’s growing sense of freedom is marked by a poignant series of small, personal moments.

The most liberating is when she visits a lake and is invited by her new pals to take a swim. She gingerly enters the water fully clothed and submerges herself as though being baptized into a new life. It’s a solemn moment, beautifully captured. Everyone around her is enjoying a casual frolic in the water. She is being transformed.

There are other scenes where ordinarily trivial moments are rich in meaning: getting new clothes; dancing; trying on lipstick; connecting with a new male friend. Schrader does a terrific job imbuing these instances with such import.

As a director she also doesn’t hold back on the tortures Esty has endured in her married life. This includes staging what must be one of the most unerotic sex scenes in screen history. Rarely has a director’s intent to make us feel a character’s pain been so vividly realized.

Unorthodox was adapted by Anna Winger, producer Alexa Karolinski and Daniel Hendler from the 2012 memoir by Deborah Feldman called Unorthodox: The Scandalous Rejection of My Hasidic Roots.

Remarkably, the sequences of Esty’s life in Berlin – the real juice of the story – weren’t in the book but were created through the adaptation process. To their credit they have done a fine job incorporating the ghosts of the Holocaust in Esty’s story, the possibility of changes to old-world thinking and the use of art to help deliver an emotionally gratifying resolution.

Given the factual basis of the Hasidic life depicted here, what Unorthodox has to say about the state of 21st century feminism is a matter of debate.

In the quest to claim the right to her own life, Esty faces the fire more or less on her own. And though patriarchy is meant to be a major target for modern-day feminism, it is alarming one could thrive without hindrance, and in such a progressive metropolis like New York, as the one portrayed here.