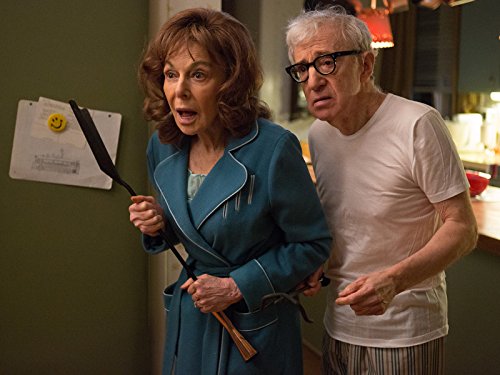 Intruder alert: Elaine May and Woody Allen star in the mini-series ‘Crisis in Six Scenes’.

CRISIS IN SIX SCENES **1/2 (six episodes; 141 minutes) 18+
Though far from his best work, Woody Allen’s six-part mini-series is thankfully not the mega-turkey his detractors have made out.

Made in 2016 and set mostly in a comfy country house in upstate New York during the upheavals of the 1960s, Crisis in Six Scenes sees fading writer Sidney Munsinger (Allen) and psychiatrist wife Kay (comedy legend Elaine May, now 87) reluctantly provide sanctuary for Lennie Dale (Miley Cyrus), a political activist on the run.

Also staying with them is Allen (John Magaro), the son of friends who is to marry the beautiful Ellie (Rachel Brosnahan from The Marvelous Mrs. Maisel).

Naturally, Lennie’s radical, anti-capitalist values clash with Sidney’s love of peace and conservatism. They hate each other instantly, she decrying his conformity and adherence to the system, he complaining about her communist philosophies and tendency to eat all of his favourite foods.

She also has a charismatic effect on the bookish Allen, whose highly structured view of the world and of his future begin melting as he becomes entranced and excited by Lennie’s radicalism and rakish beauty.

Though presented as a TV series, Crisis is more accurately described as a so-so Woody Allen movie chopped into six parts. And for the first three at least, it’s a bit of a dog’s breakfast.

For the first time since 2012’s To Rome With Love Allen cast himself in the film, which was probably a mistake. At 84 he can still deliver the occasional throwaway line, but as a character he is a bumbling collection of curmudgeonly jitters and paranoia about the house being bugged by the FBI.

Contrary to his trademark concision, Allen’s direction is often lax; many scenes go on way too long and there is some surprisingly clumsy cutting. One imagines that if he had the chance to re-edit the series into a single film he’d trim its 140 minutes down to a lean 100 or so. There are a lot of sluggish moments and comic digressions that aren’t up to par.

However, things do improve from the half-way point once some plot lines begin to congeal and the pace quickens.

May is wonderful as his more successful wife, but the real revelation here is the spirited performance by pop princess Miley Cyrus, who seems to revel in the role, especially when exchanging barbs with Allen.

Fans of Allen’s work are the most likely to find value here, particularly in the comic set-ups that occur in the last two episodes. So, no, it’s not the unwatchable dross so many write-ups have made it out to be.

Despite the promise it held to reinvigorate Woody Allen’s career, the making of Crisis in Six Scenes turned out to be disaster for him.

Thinking a TV show would be a piece of cake and a fast way to earn big money he found it was anything but. He struggled with it and was not happy with the result, something he has said openly since.

The show was also supposed to be a coup for streaming giant Amazon Studios, which had a four-film deal with Allen.

However, the #metoo movement raised historic claims by his adopted daughter Dylan Farrow that Allen had assaulted her as a child. (Those charges, always denied by Allen, were never proved.) Allen commented that he supported #metoo, claiming he would make a good poster boy for them.

Amazon took umbridge at this, claiming Allen’s comments had breached their contract, thus stranding Allen’s new film A Rainy Day in New York, which was not distributed in the US, only getting overseas exposure through other companies.

In February last year Allen began to sue Amazon for $86 million, but the matter was settled for an undisclosed sum in November.

The experience, which was meant to be a glowing twilight chapter in Allen’s career, has clearly burnt him. Woody Allen’s next movie, Rifkin’s Festival, is an Italian/Spanish/American co-production.

Not surprisingly, there is no streaming giant attached.