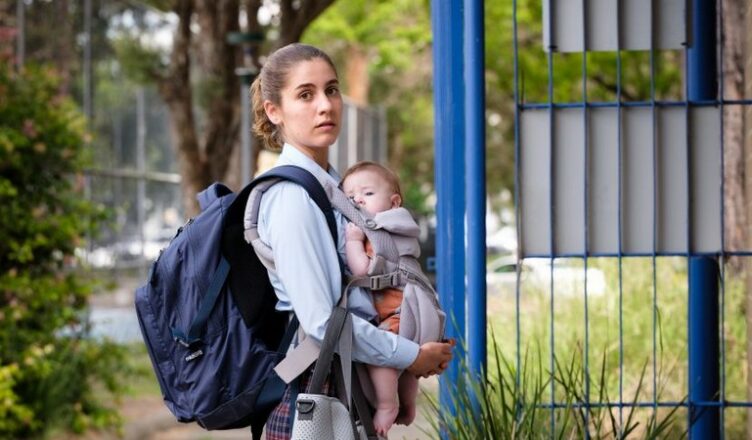 BUMP – SEASON ONE ** (293 minutes; 10 episodes) MA
whole season review
With signage everywhere heralding the impending arrival of Bump Season Two on Boxing Day (2021 in case you’re reading this in the far future) one can but ardently hope it will be a big improvement on Bump Season One.

In preparation for an interview some months back about Under the Volcano with director Gracie Otto (who directed three of the 10 Bump episodes) your humble reviewer sat before the big screen and watched the entire first season of Bump, in one gulp and often under sufferance. It was a bumpy ride – dreadful pun intended.

While not exactly bad, Bump suffers from glaring implausibilities, mediocre storytelling and is often simply dull.

The show serves as a sober reminder that when dramedy is done well it flows like milk and honey. When it’s not done well, it’s more a case of oil and water. Bump is a definitive example of the latter.

In a wholly unconvincing set-up, the baby literally pops out of nowhere, stunning everyone, including Oly who didn’t know she was with child. It’s as if an alien has beamed down into her suburban world.

Worse, Oly’s attitude towards her bub undergoes a sudden, inexplicable reversal. First she wants to get rid of it through adoption, then she wants to keep it. The baby goes from thing to cherished offspring like that. Perhaps it’s gratitude for the baby not kicking or causing much fuss when it was a fetus.

For while the show makes some claims to social realism, Bump stars what must be one of the most well-behaved babies in TV history – even after it’s finished gestating.

Yes, it pipes up, poops and vomits occasionally to remind us it’s still there, but the baby mostly has the presence of a log; in far too many scenes it is far too obvious that Oly is carrying a dummy or pushing around a vacant pram.

The baby also causes a staggeringly small amount of disruption to Oly’s education and home life, often receding into the background as though the child is a lifestyle accessory.

Attempts to emotionally invest in the story and characters of Bump are continually hobbled by its high degree of contrivance, puncturing its credibility as a show with pretenses to realism and to addressing social issues.

Chief among these is that Oly’s mother Angie (Claudia Karvan; also a producer and co-creator with Kelsey Munro) and Santi’s father Matias (Ricardo Scheihing-Vasquez) happen to be teachers at the same school.

How convenient, especially when it comes down to getting it on with each other. In terms of buying into a yarn, however – No Sale.

The series is supposedly set present-day and largely in a high school populated with teenagers. Yet where’s all the social media? There’s an initial wave of online backlash to Oly’s situation, but once that subsides her life remains untroubled by trolls, Twitter ghouls and TikTok haters. Perhaps the school has a very strict social media policy we’re not told about.

Too much of the “serious” dialogue in Bump is tinny and rings false, as if the characters are mouthing the woke views of the show’s creators. “Gender equality in education is a destination, sir, not a diversion,” we hear. Hmm. What an articulate outburst.

The pace of the show suffers from pressing too hard on the woke pedal. Consequently Bump often loses focus on Oly’s arc as it becomes preoccupied with addressing a lot of spinning plates to do with diversity, cultural identity, LGBT issues, and so forth. It’s just clumsy storytelling that adds tedium to the unspooling.

Indeed, the final episode suggests Oly’s predicament ranks second to the show brandishing its woke credentials. This grates. It’s cringeworthy stuff. Surely it should be the other way around – story first, virtue signalling second.

(Come to think of it, when messaging is deftly blended into a narrative it doesn’t come across as virtue signalling at all but as part of the narrative fabric.)

While the quality of the performances in Bump is erratic – is it a good idea having multiple directors on a single-story series? Just asking – the turn by Angus Sampson – a very talented actor, to be sure – is all over the shop.

As Oly’s father Dom he wavers from serious to clownish caricature. It’s a jarring presence.

This is most evident in the ridiculous “stoner” episode, a silly excursion that provides the full meaure of just how unfocused Bump becomes. How the episode survived the writers room in this elongated form is a mystery. Presumably somebody thought it was funny.

And why is there so much dancing in Bump? It’s irritating and, to be frank, poorly done. Especially when Dom dances.

Overall, Season One of Bump struggles with its cumbersome mix of drama and comedy. Apparently having a baby when you’re still at school is a bit of a lark, a few serious moments aside.

The world Oly inhabits in the alternate reality of Bump is one where kids don’t sledge on social media, where a baby is a minor inconvenience and where there’s always plenty of time for dancing and pot.

One could go on and on, but life is too short. These admittedly belated critical notes about Bump are proferred with the sincere wish the next ten episodes hold together much, much better.