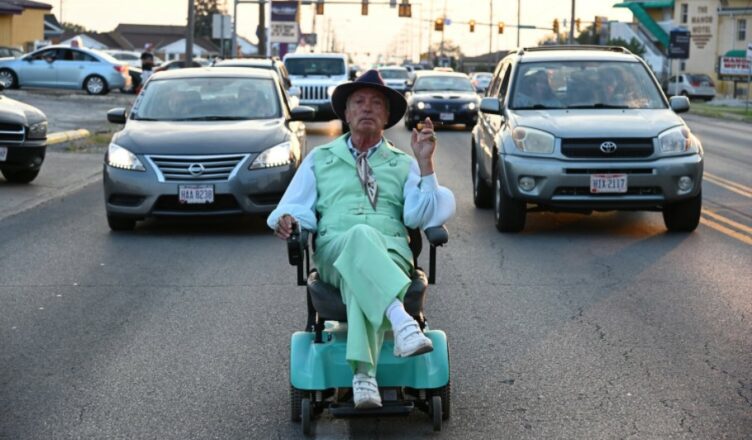 Upon news that one of his wealthy former clients has died and wants him to do her hair for the funeral, Pat bravely decides to honour the request by breaking out and heading to town.

With no resources, no money, no decent clothes and no planning, Pat saunters through the streets, revisiting haunts he once frequented and friends he has not seen in years.

He’s not particularly striving to recapture parts of his glorious past, still he relishes his various encounters – some of them real, some of the surreal.

Wandering into a clothes shop, he comes across a woman who still thanks him for inspiring her years earlier. Turning a random corner, the sight of kids playing with a skipping rope brings him an unexplained, unalloyed joy.

He meets an old, old friend and they reminisce on a park bench. He visits a gay club he once frequented and converses with a young bartender who inadvertently puts Pat’s vintage and his local legacy into perspective.

These and many other deft, closely observed touches from writer/director Todd Stephens add a melancholic edge to Pat’s travels through the town’s unassuming streetscapes as he seeks the second-final resting place of his deceased client (Linda Evans – yes, Krystle Carrington from Dynasty) so he can accomplish his mission.

The modestly mounted film was made by Stephens as a fictionalized tribute to the real “Mr Pat”, a flamboyant, gay hairdresser and small-town icon who Stephens knew only slightly, but whose proud attitude influenced him.

It was also filmed in Sandusky, Stephens’ home town, with what appears to be the most comprehensive degree of co-operation imaginable. Check out the end credits and marvel at how many people and organizations helped out.

Clearly a passion project, Swan Song meanders a bit and gets a little cloying at times. And it goes on a bit; perhaps 90 minutes would have been plenty.

Still, journeyman actor Udo Kier owns the film, working wonders with his entrancing performance as an old man who refuses to decay even if he accepts he will be forgotten.

The many close-ups of his crevassed face, especially early on, foreshadow a man who might be engaging on his final jaunt; as he seeks the beauty products he needs to do his job he is visited by polite portents that seem to gently signal to him that the clock is running down.

Strong though his spirit is – which amps up with the acquisition of a fabulous new get-up Quentin Crisp would have cleaned his apartment for – Kier never overcooks it.

Having made understatement one of the hallmarks of his sprawling career – over 220 films – Kier knows better than to spoil a good thing by pushing it. He’s long been a master of the Less-Is-More school.

What he does in Swan Song easily ranks as one of his most memorable turns.