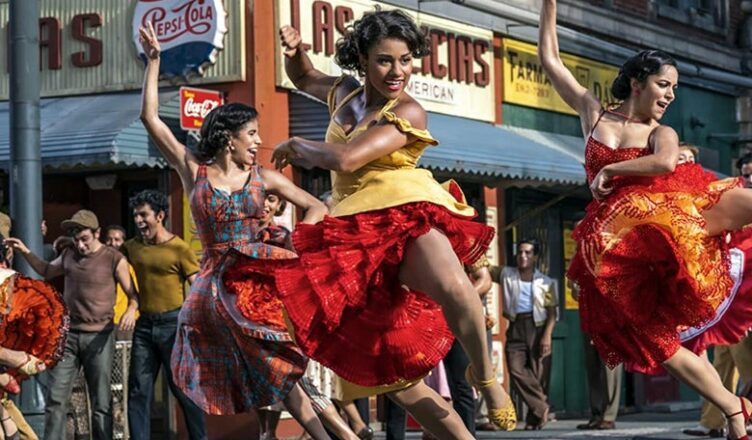 Street moves: Dancing up a storm in Steven Spielberg’s dazzling remake of ‘West Side Story’.

WEST SIDE STORY **** (156 minutes) M
With his long-standing love for big-screen spectacle and drama, director Steven Spielberg scores a bullseye with a superb, boisterous, fabulously cinematic rendition of Jerome Robbins’ West Side Story, the 1957 Broadway smash musical made world-famous by the classic 1961 film directed by Robert Wise (with help from Robbins).

Captivating, joyful and with just the right measure of pathos, West Side Story tells of the forbidden love between white guy Tony (Ansel Elgort) and the Puerto Rican Maria (Rachel Zegler) in a slum area of New York that is in the middle of being redeveloped into a pricey haven for the post-war middle class.

Tony is the co-founder and former leader of the all-white street gang The Jets. Though the guys still revere him, Tony wants nothing to do with them as he works hard to lead a clean, decent life after a stretch in jail.

Maria is sister to Bernardo (David Alvarez), the leader of The Sharks, the rival of The Jets. He doesn’t much like it that Tony and Maria locked eyes during a communal dance event.

The Jets and the Sharks are preparing to have a major fight – or “rumble” – over the rule of precious street turf, which consists mostly of unkempt back alleys and some dilapidated baseball courts, all ringed by high cyclone fences (a major motif from the original).

The futility of the impending fight gets double barrelled treatment; the story’s strong Puerto Rican women – including Rita Morena, the original Anita (Bernardo’s girlfriend) who also serves as a producer – see it as male folly. Or to put it in modern parlance, an egocentric expression of toxic masculinity.

For their part, the local cops Lieutenant Schrank (Corey Stoll) and Officer Krupke (Brian d’Arcy James) seem to enjoy reminding them that the turf they’re battling over will soon have no place for them once it’s been demolished and repurposed.

Still, the fight goes ahead, with painful consequences that follow the general contours of Shakespeare’s tragic yarn.

While newcomers to West Side Story should enjoy the energy and sweep of Spielberg’s slick and sumptuous film, fans of the original film will have added reasons to rejoice.

While the music and story are pretty much the same – a few variations notwithstanding – what really puts the zap on West Side Story 2.0 are the film’s sensational production values.

Collaborating again with his long-time, Oscar-winning cinematographer Janusz Kamiński (Schindler’s List; Saving Private Ryan; Jurassic Park 2; Munich, etc etc) Spielberg emphatically deploys his 60-year advantage over the original to mount the dancified, ghettoized Romeo and Juliet tale on a scale and with a vivacity that is often breath-taking.

Set in 1957, the period recreation is so beautiful and vivid it’s a fair bet the film looks more like 1957 than any film actually made in 1957. In a sweet irony, it certainly evokes the period better than the original.

Whereas the original film was limited by the need for sound stages due to the size and restricted mobility of cameras back then, the cinematography here has free rein to fly, swirl, pan, dolly and track as it vibrantly transports us back in time.

And while the songs are largely preserved, fans of the original film will note with glee how the dance choreography has been totally redone and set in open-air street settings that reek with detail.

The editing is splendid, though, to be fair, this is one example where the new West Side Story has its feet firmly planted on the shoulders of the original.

Dated though the 1961 film is, the editing set brilliant new standards and had a game-changing influence; Robert Wise used his West Side Story experience on The Sound of Music; director Bob Fosse regarded the original as an editing masterclass, as is evident from All That Jazz.

Two major modification this time around is how the film (written by Tony Kushner; MunichLincolnWest Side Story justifies itself admirably by imbuing this classic story with contemporary relevance by directly and forcefully addressing such topical issues.

Predictably, there have been crits of the film regarding the portrayal of Puerto Ricans, ethnic and cultural stereotyping, failure to reflect the full immigration experience and so forth.

A few points on that:

The film celebrates Puerto Rican culture and pushes back against stereotypes, particularly through the female characters who embody common sense and reason against the proclivity for violence amongst the males;

Anyone who actually sees the film can’t possibly miss the strong anti-racism and anti-violence themes that drive the story. Given that the whole area is being torn down and gentrified, the story makes the point – loud and clear – how the big gang fight ultimately has no point because soon there will be no turf to fight over.

Finally, and ultimately, West Side Story is a musical reimagining of William Shakespeare’s romantic tragedy Romeo and Juliet, and this film is a lovingly made makeover of the 1961 film. It is not a documentary.