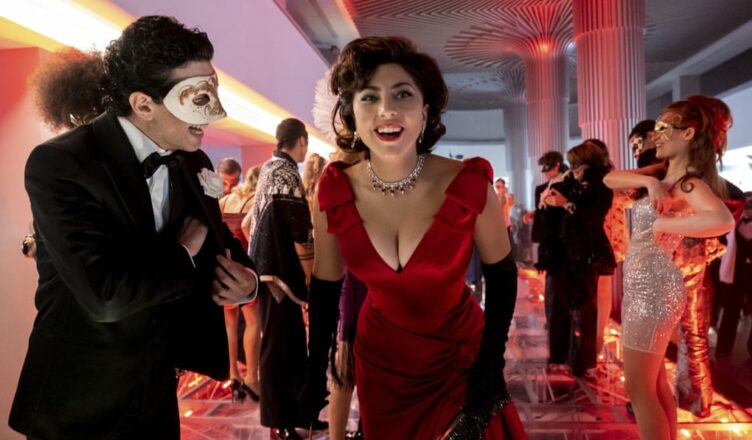 Centre of attention: Lady Gaga stars as a manipulative wife in ‘House of Gucci’.

HOUSE OF GUCCI ***1/2 (158 minutes) MA
Along with serving up an engrossing story of greed, envy, murder and the politics of high fashion, House of Gucci also clicks as a case study in how to trash, then redeem a great fashion brand.

In essence, House of Gucci is the portrait of a dysfunctional family, writ large.

Brandishing one of many fruity Italian accents featured in the film, Adam Driver plays the doomed Maurizio opposite Lady Gaga, who does a killer job as his killer Patrizia Reggiani.

Though she doesn’t quite take full possession of the film – nobody steals a movie from Al Pacino – Lady Gaga is the radiant centre of House of Gucci, pulling off a performance on par with her terrific turn in 2018’s A Star is Born.

Gaga (real name Stefani Germanotta) is simply stellar, playing the plot-driving Patrizia as an attractive, seductive, manipulative, ambitious transport company officer manager who has the smarts to shmooze her way into the fortunes of the Gucci family, but not quite the smarts to secure her place in the Gucci dynasty.

The meet-cute between Patrizia and Maurizio is classic stuff: they hook up in the early 1980s at a hip party where she mistakes him for a bar tender and gets him to make her a drink.

They bond quickly and to the stern consternation of Maurizio’s aging father Rodolfo (Jeremy Irons, bearing another rich Italian accent), who thinks Patrizia’s job working for her father’s trucking company is below the social station of his precious only son.

Threats from Rodolfo to excise Maurizio from his will fail to do the trick. In the only real romantic beat in the film, he turns his back on it all and takes up a lowly job working for Patrizia’s dad.

But it’s far from easy street. There’s plenty of trouble with the family business to do with documents, legal hassles, pirated merchandise and, in particular, the presence of a third Gucci brother Paolo (Jared Leto, unrecognizable under layers of special make-up).

He has dreams of being a Gucci designer, even though his lack of ability so laughably low both Rodolfo and Also openly joke about it. Still, as a stakeholder in the company, Patrizia needs to cozy her way into his good books so she can negotiate her way up the family tree and secure her riches.

Though House of Gucci is not a comedy – and certainly not “trashy” or “camp”, as some have mislabelled it – Scott’s direction is very spirited and pacy, eating through the lengthy running time as the drama stumbles from one catastrophe to another and the relationship between Patrizia and Maurizio begins to strain.

If anything, there is an uneasy tension between the film’s overall dramatic tone and some scenes that veer towards the clownish.

Though Leto is impressive as Paolo – all credit to the make-up artists for their super job uglifying his pretty head – the scenes with him have the feel of parody.

So, too, Patrizia’s dealings with her psychic consultant Pina (Salma Hayek), who goes from being a friendly clairvoyant to a participant in Maurizio’s murder.

You could argue that Scott’s direction wavers a bit too much between hi-gloss soap driven by greed and a pretty straight drama about business as Maurizio fights to restore the company’s former glory.

What is beyond any sensible discussion is that House of Gucci is fabulously entertaining from end-to-end, thanks largely, though not solely to the magnetic central turn by Gaga. With A Star is Born under her belt, her feisty performance in House of Gucci should secure her a decent living should she ever gives up the singing.

The film has some fleeting similarities to Ridley Scott’s All the Money in the World, which was also a rich-family crime-drama. The main difference is House of Gucci has an undeniably element of fun as it unwinds, right up until the moment it gets deadly serious.

While the film admittedly indulges the guilty pleasure we might have in watching the ultra-rich struggle, it does emphatically make the point that all these shenanigans about money, greed, lust, envy and revenge lead to the cold-blooded killing of a man.

An important footnote to the film – based on The House of Gucci: A Sensational Story of Murder, Madness, Glamour, and Greed by Sara Gay Forden – is that the production received the full co-operation of the Gucci company; the film stresses in its closing captions that no Gucci family members have anything to do with the fashion house.

We can reasonably take from this that the film, as well as being a thoroughly satisfying serving of entertainment, can also be taken as a savvy exercise in brand protection.

In an odd way, House of Gucci could be seen as a very effective, rather perverse marketing exercise designed to distance the company from the events depicted.

While the film’s chief message is clear – don’t murder people – it also says to the audience that the shenanigans you’re seeing on screen have nothing whatsoever to do with the company now.

Another fun fact about the film is that the real Patrizia Reggiani apparently isn’t all that happy with the film. Hmm. No disrespect intended, but her sensitivities about how she’s portrayed in a Hollywood movie are somewhat academic given how she’s been convicted of murder.

Perhaps she could write a book about that some day.