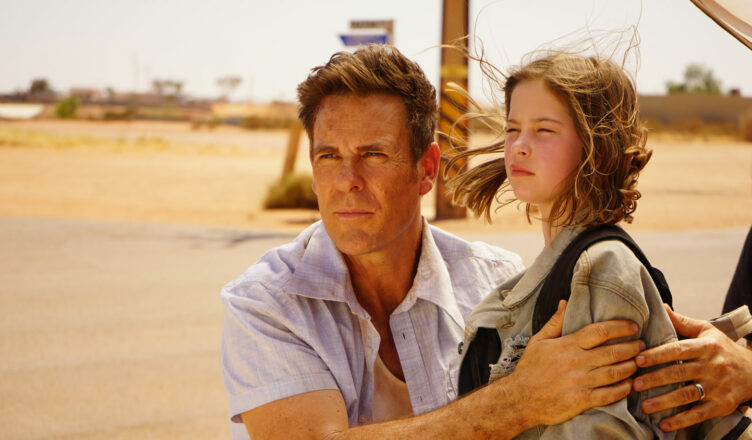 Together, sort of: Aaron Jeffrey and Ashlyn Louden-Gamble in ‘Moon Rock for Monday’.

MOON ROCK FOR MONDAY 1/2 (96 minutes) M
Whatever one has to say about the state of the Australian film industry, one thing that is beyond any sensible argument is that it should be at a point where films as bad as Moon Rock for Monday just couldn’t be made.

Unfortunately, that’s not the case and it is with a tremendous sinking of the heart that you realize at about the 20-minute mark that the film has absolutely no idea what it is doing.

The story involves Monday (Ashlyn Louden-Gamble), a terminally ill girl who believes travelling to Uluru will cure her.

Happenstance throws her into the friendly clutches of gun-wielding teen thief Tyler (George Pullar) and before you can ask yourself “was this film made in 1983?” they’re off on a road trip, blithely leaving dad Bob (Aaron Jeffery) behind.

Although he is burdened with both the disappearance of his daughter and having to deal with the most idiotic cops on Earth, he is at least blissfully ignorant that his daughter is perfectly happy to have run off and is now in the company of a criminal.

Aiming for an uplifting vibe, the film is simply clueless. The trouble begins with the way writer/director Kurt Martin mounts the story’s inciting incident, instantly losing the audience with its utter implausibility.

And that’s but the first implausibility of many – so many, indeed, that Moon Rock for Monday might actually qualify as one of the worst Australian feature films since the 1980s, a dark time when films this bad were produced at a frightening rate.

It’s a faint hope but it’s possible the film might do some good should enough film industry people who matter see Moon Rock for Monday and say to each other “this has to stop”.

That’s not being harsh. Harsh would have been the 3000-word version of this review deconstructing the film scene by scene, addressing its deep confusion with what type of film it wants to be, along with the film’s almost complete absence of story logic. Alas, life is too short.

The main cast members do deserve a nod of respect for their efforts, especially young Ashlyn Louden-Gamble who manages to shine through the debacle in a few select moments. The promise she shows kept the film from getting a ZERO rating.

She’s the brief sparkle in a shambles of a film that is so bad it is almost instructive. But the Australian film industry has made quite enough of those.

SIX MINUTES TO MIDNIGHT ** (100 minutes) M
One of the more important roles of cinema is to spotlight little-known chapters in history. So that’s at least one thing we can thank the otherwise pedestrian WW2 drama Six Minutes to Midnight for.

Set just before the breakout of war in the inevitably attractive English countryside, we meet teacher Thomas Miller (Eddie Izzard) who has just landed a new post in a girls school near the coast.

What’s special about the school is that all the girls are German and devotees of the Third Reich, with classes that include the traditional “Heil!” to the Fatherland and to its father Adolf Hitler.

Not many people knew about this, so thanks to the film for letting us know about its factual basis.

The authorities are concerned about the school and the spying it is likely involved in and so recruit Miller to serve his country by spying on the girls.

As the school’s headmistress, Judi Dench is the only one who comes out well from such a shabbily mounted attempt at a thriller; there’s clunky dialogue and story holes all over the shop.

The final reel, in particular, relies on the audience presuming that the place was not under under surveillance. There’s also one especially clumsy sequence involving a marching band. It really does make you wonder why somebody in the production pipe up and say “this is just silly”.

As watery as the direction from Andy Goddard (Downton Abbey) is, Six Minutes to Midnight does have one major distinction: in no other film will you see Eddie Izzard run so much. It should have been called Run, Eddie, Run.