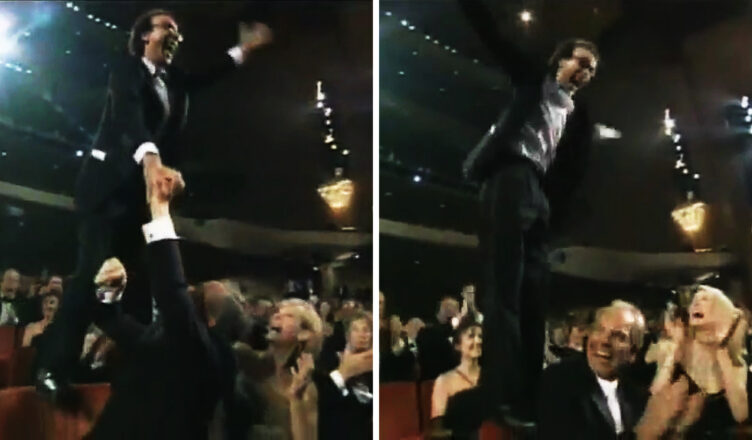 Oscar love: Roberto Benigni’s reaction when his little film ‘Life Is Beautiful’ won big at the 1999 Oscars. If the Oscars didn’t value diversity, such moments simply would not happen.

The Oscars are a mess. Let’s fix them. But first…
Not to boast or anything, but most of the major Oscar winners were successfully predicted here – Best Actor, Actress, Supporting Actress, Film, Director, Animated Film, International Film, Visual Effects and Production Design. You’re welcome.

Admittedly, most of them weren’t that hard to guess, in particular Frances McDormand picking up another Best Actress award, this time for Nomadland, and Anthony Hopkins getting Best Actor for The Father.

Equally predictable was all the wailing and gnashing of teeth over the horrific “snub” dealt out to the late Chadwick Boseman, nominated for Ma Rainey’s Black Bottom, who lost to Hopkins.

Those most upset were the telecast’s producers who – rather stupidly – reorganized the order in which the awards are traditionally given, putting the announcement of Best Actor last in anticipation of Boseman winning the award. The idea was to end the ceremony with a moving tribute to the actor as well as on a diversity-flavoured high. Bummer.

That Hopkins won might have disappointed some but it stood as heartening testament to how merit-based the Oscars still are, admirably maintaining independence in the wake of some very strong sentiment.

The mop certainly flopped the way it should have. Bluntly, Chadwick Boseman wasn’t “snubbed”. He lost to a better performance.

And the win had wider significance. Having the award go to an 83-year-old white guy from Wales served as an amusing, and timely, backhander to the Woke culture presently infecting the Oscars, and a much-needed reminder that merit wins out over identity politics. Or should.

The ratings nosedive
Yet probably the easiest thing to predict about this year’s Oscars ceremony was that the ratings would hit an all-time low. And they did – only they didn’t just fall from last year, they crashed.

The 2020 telecast drew a mere 23.6 million viewers across the US, which was a new low. This year’s soiree couldn’t even get 10 million, peaking at 9.85m, less than half last year’s figure. If the Oscars wasn’t in a crisis of relevance before, it sure is now.

So, why? The main reasons
As previously opined, the tiny cinema audiences the nominated films drew severely limited people’s interest, with COVID’s impact on cinemas playing a big role.

The two-month COVID-inflicted delay sapped the event of its usual stature on the awards calendar.

Going hostless yet again was a big mistake. It’s a great tradition that needs to be re-embraced as quickly as possible.

Forget the cold feet over whether a host will say something controversial.

History shows that people will tune in to watch a big-name host. Johnny Carson. Bob Hope. Billy Crystal. Whoopi. Ellen. Come on. There’s talent who would kill for such a killer gig.

Time to reform and acknowledge genre
Even with the smaller, “intimate” nightclub venue the ceremony remains too long and dull. Even though changes were made, with no big production numbers or film clips, the thing still went on and on.

Too much time is wasted with minor categories such as live-action short, animated short, documentary sort. Keep the awards, but present them off-air at a separate ceremony. That’d shave at least 20 tedious minutes off the running time.

And it’s time Oscar got serious recognizing genre films. The arthouse nature of so many Best Film noms partially account for the gaping disconnect between the Oscars and the public.

One way to fix that is to introduce awards for genre films.

Why not have Oscars for Best Action Film, Best Comedy, Best Romance, Best Fantasy, Best Sci-Fi, even Best Stuntwork and Franchise film? Provided the selection process prioritizes excellence many more popular films would fight for a place in the Oscars race and, hopefully, hit reverse on Oscar’s shrinking appeal.

How Woke has damaged the Oscars
Still, the biggest thing hobbling the Oscars right now is the thing not enough industry people want to address, and that is Hollywood’s embrace of WokeThink and identity politics.

It’s no coincidence how the rapid decline in Oscar’s popularity that began in 2015 corresponds precisely with the calls for “diversity” and the idiotic #OscarsSoWhite campaign.

It’s important to note how the previous year’s Oscars was a hands-down triumph. Hosted with wit and charm by Ellen DeGeneres, the ceremony pulled an average of 43.74 million people and was so beautifully produced the show itself won awards.

That the Oscars could slide so quickly from such a glittering highpoint to this year’s ratings catastrophe can be put down to the influence of Woke.

In short, the effect of the #OscarsSoWhite movement and all the consequent commentary about diversity initiatives and proportional representation, with so much emphasis on gender and race, has changed the way normal people view the awards.

It’s a generalisation, sure, but the Oscars have long been seen as a fair measure of quality. Inevitable anomalies aside – there will always be upsets and head-scratchers – the Academy Awards tended to go where they deserved to go, that the Oscars primarily rewarded merit. A key principle.

And that principle still holds, no doubt – only the public’s perception of Oscar has now changed.

All the strident chatter about diversity, proportional representation, gender imbalance, minorities and identity politics that has come to the boil since 2015 has reframed the way people regard the awards.

To be clear, all the films nominated for Best Film this year would most likely have been nominated in any year. (The only exception here would be Promising Young Woman, a B-grade exploitation film that owes its Oscar prominence to #metoo button-pushing, not to quality.)

But this year, thanks to Woke, the public perception of why certain films get nominated has shifted significantly; it’s not so much that they were good but because they box-ticked a Hollywood-endorsed agenda.

Thanks to Woke, the public has become suspicious: is Judas and the Black Messiah nominated because it’s a very good film, or because it increases minority representation on screen?

The Oscars has been overcome with ideological prattle, and the public has reacted. People do not like having systems of thought imposed upon them, and that is what they see the Oscars doing. The Academy Awards are now seen through the prism of identity politics rather than merit – and the public simply resents it.

Busting the #OscarsSoWhite myth
The real tragedy of all this is that Oscar has always moved with the times – a little slowly perhaps, but it has long embraced change and the recognition of good work and talent wherever it came from.

The emblem of this value is the priceless image of Roberto Benigni climbing on chairs at the 1999 Oscar, elated that his film Life is Beautiful had just won Best Foreign Language Film. (It also took out best Score and Best Actor for Benigni.)

Here was Oscar acknowledging that this odd little Italian film warranted global attention – not because Italians were under-represented in cinema, or because surveys showed there weren’t enough Holocaust-based comedies, but because the film was good and deserving of the doorstops it got.

It is a core value that Oscar still possesses, but Woke has corroded the faith people have in its reputation for rewarding merit. Restoring that needs to be a priority.

The irony is that all the changes demanded by Woke were happening organically anyway. By forcing it, a lot of progress might be undone.

For instance, the presence of Asians and African Americans at the Oscars podium has been steadily on the rise since the mid-1980s and was occurring naturally as a reflection of talent.

Now such wins, however deserving, are tainted with the thought, however untrue, that the win is due to something other than talent; that it’s a corrective reaction to the notion promoted by #OscarsSoWhite, that Oscar is inherently unwelcoming to anything “other”.

It’s a groundless myth that any casual survey of Oscar winners over the past 60 years would bust. #OscarsSoWhite was also an ignorant, knee-jerk reaction to two years of acting nominees being white men. The response has been equally impulsive and wrong-headed.

Yet WokeThink still has the floor, and as long as that continues to be the case Oscar’s public appeal will continue to dwindle until the ceremony ends up being a vlog.

Let’s pray to the Movie God it doesn’t get to that.