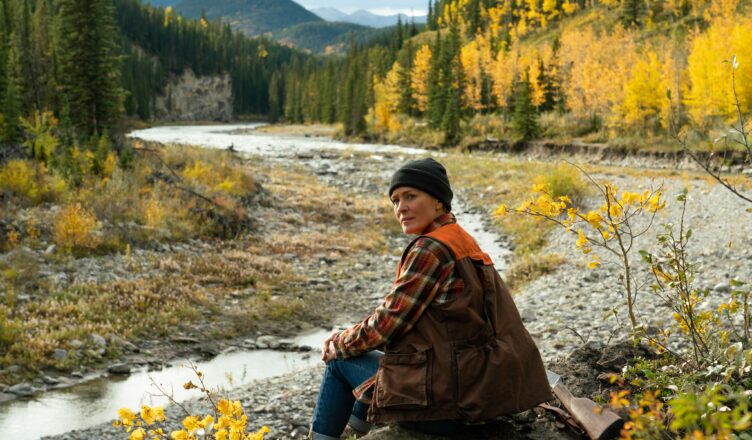 On her own: A distraught woman looks for solace in the wilds of Wyoming in ‘Land’.

LAND **** (89 minutes) M
A woman devastated by an unspecified event looks to nature for solace through solitude, her hope being that shutting herself off from the world in a remote cabin in the wilds of Wyoming will bring peace and healing to her emotionally tormented heart.

Instinctively, withdrawal from the society sounds like the sensible thing to do, yet the experience soon teaches Edee Mathis (Robin Wright) the value of human connection, that no person is an island no matter how much they delude themselves that self-imposed isolation is the answer to their broken life.

Wright makes her impressive directorial debut in this moving, quietly powerful film that pits the harsh, unforgiving rigours of physical survival against the equally arduous challenge of psychological survival.

With great subtlety and few words – most exchanged with Miguel (Demián Bichir), a local hunter who lends her a much-needed hand – Wright riffs on the notion that while Edee’s physical ordeals are imposed externally, her psychological scars are in some ways more daunting.

Still, deep as they are, she slowly realizes through her scant contact with Miguel, who is suffering from his own trauma, that she has some control over whether she will heal.

At times Wright’s direction is lyrical and admirable for its restraint; despite what must have been a temptation, she keeps from revealing too much too soon.

Normally in a scenario like the one presented here (based on a screenplay by Erin Dignam and Jesse Chatham) there would be a drip feed of backstory laying bare what Edee’s issues are.

There are some flashbacks as she heads into the mountains and tries coping with the toil of living in real isolation – no phone, no internet, no vehicle – but we only get hints about the depth of her pain; nothing is mapped out.

The deft use of concealment is a brave dramatic device that can dial up the viewer’s emotional investment in a character’s story by making them sensitive to any nuance or detail that might hint at the backstory.

That really pays off here, the way it did in the Robert Redford film All is Lost.

The cinematography by veteran Bobby Bukowski (Arlington Road; 99 Homes evokes the beauty and threat of the wilderness in equal measure. Exemplary is the use of light to distinguish when Edee’s cabin is a safe haven from cruel nature and when it’s an over-sized coffin, waiting for the wild to claim its sole inhabitant.

The film should play well to discerning adults who enjoyed Nomadland and appreciate how good survival films present life-threatening challenges to both mind and body.

Footnote: Given how saturated we are with Star Wars references and branding these days, it’s very refreshing to see Land use Yoda in a manner that is dramatically meaningful, rather than just for a laugh – though it manages that, too.