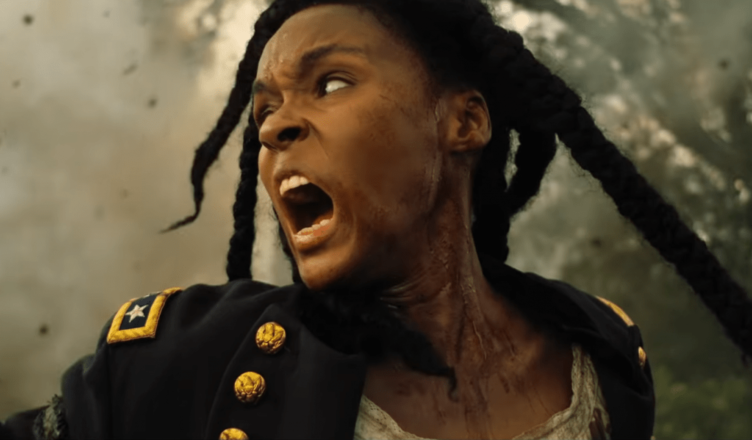 Inhabited by victory-drunk Confederate troops who regard their black slaves with open hostility and summary violence, the estate has just received a batch of new inmates including Eden (Janelle Monáe) who quickly learns what happens if anyone speaks out of turn or shows disrespect.

It’s White Supremacy paradise; the soldiers get to bully and rape whomever they like with punishments for non-compliance ranging from whipping to branding to instant execution to being roasted alive in a specially designed iron shack with a very medieval vibe.

As M Night Shyamalan has just reminded us with Old, we all love a good twist and Antebellum (which scored a brief cinema release late last year) has a knockout mind-blower, cleverly revealed via slow tease by debutante writer/directors Christopher Renz & Gerard Bush.

Admittedly it’s not the most original “out-there” movie device ever – there are several very famous precedents – yet it is deployed effectively enough to hit the one mark it needs to hit, which is to have you knitting your brows half-way through the film wondering what the what is going on.

As a slice of thriller entertainment Antebellum works very well, let that be clear. Yet it is clearly intended as a mystery with a hot-button agenda about the everyday acts of casual racism black people still endure today, despite their wealth and success.

To be sure, it’s a noble stab at deep-and-meaningful commentary, but regrettably tainted by: the use of the very stereotypes the film seeks to condemn; a badly judged moment of ironic justice; and a finale with a decidedly mixed, possibly unintended message.

Indeed, the final ten minutes could serve as a red flag to any Red State fanatic wanting to condemn the film. It’d be cool to know if the film bypassed the usual test screening process.

Most movies that feature a twist trigger are often richer and more enjoyable the second time around because you know the “secret”. Not so Antebellum, which works well on one viewing but suffers hugely on a repeat viewing because what you now know punches plausibility holes in the proceedings.

Too bad. Made with a bit more care, this could have been great.