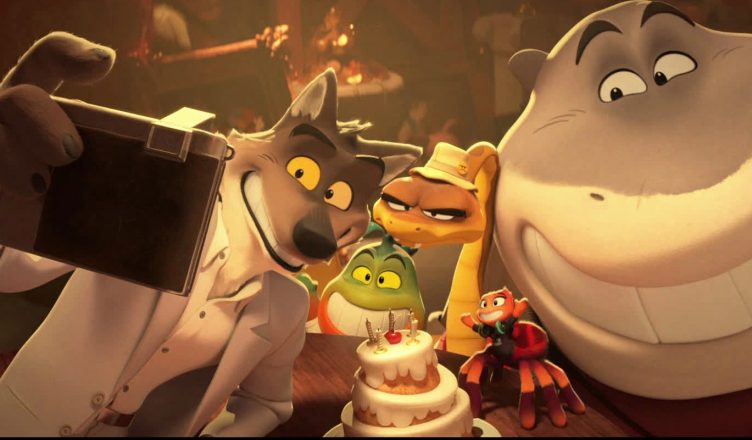 Say cheese: The gang from ‘The Bad Guys’, likely the first of a series of animated larks.

THE BAD GUYS **** (100 minutes) PG
Whatever craziness was involved in the decision by Dreamworks to try and ignite an animation franchise at a time when the movie market is literally bursting with franchise films pays off in spades with The Bad Guys, a deliriously entertaining, fast-moving gang comedy that actually has a decent story and something sensible to say about stereotypes.

The nub of the narrative involves a loveably nutty ensemble of anthropomorphized critters who commit high-velocity crimes under the hubristic leadership of the snappily attired Wolf (voiced by Sam Rockwell), a dude so sleek and self-confident he almost becomes unbearable.

Thankfully before we actually get to that point Wolf and his crew are brought down several notches when a heist goes wrong and they are impelled to change their “bad guy” impulses.

They are sent into the swanky lair of the kindly Professor Rupert Marmalade IV (Richard Ayoade from The IT Crowd), a guinea pig with a high intellect and a great talent for reading people.

Though Wolf sees it as a foolproof ruse to exploit the forgiving, naïve nature of governor Diane Foxington (Zazie Beetz), he feels a disturbing new sensation building within him where his cherished, fun-loving dedication to doing the wrong thing is challenged by an unaccountable urge to do the right thing.

It’s a meaty, well-thought out through line that helps anchor the hyper-caffeinated pacing of the film, which manages to keep track of about a dozen parallel sub-plots amidst a bevy of chases, explosions and character pivots.

Deftly woven into the story is an ever-topical theme about stereotypes and how judging people based on presumptions can lead to a whole lot of hurt. The film also has fun toying with the concept of what is and isn’t genuinely cute.

Fast, funny, with plenty of wit and top-shelf, state-of-the-art animation – fans of the form will love the use of follow-focus and depth-of-field – what truly sets the film up as a franchise kicker is the instant adorability of the gang members.

They’re all well-drawn, distinct characters that make the ensemble sizzle.

The shebang is proficiently directed by debutante Pierre Perifel from a screenplay by Etan Cohen, who wrote Men in Black 3 and co-wrote Madagascar: Escape 2 Africa, Idiocracy and Tropic Thunder.

The film is based on the hugely successful books by Australian author and former actor Aaron Blabey (Crash/Burn), who was executive producer on the film along with Australian director Patrick Hughes (Red Hill; Expendables 3; The Hitman’s (Wife’s) Bodyguard). More power to them.

The film feels like the start of a beautiful friendship with audiences. Here’s hoping this first dance can avoid the dreaded pitfalls of sequelitis that even the legendary Pixar couldn’t sidestep.