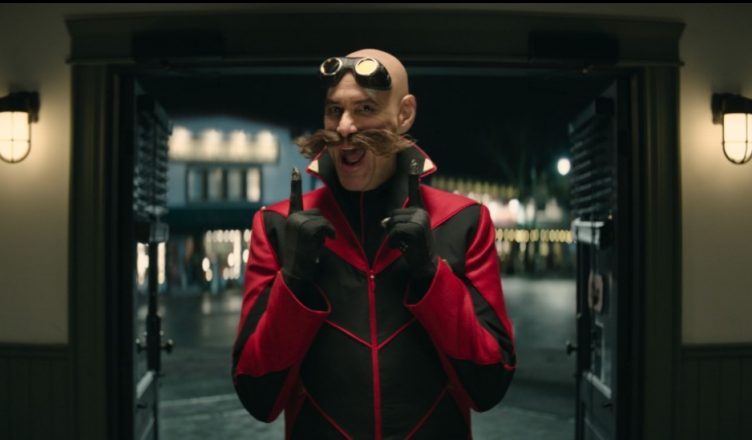 SONIC THE HEDGEHOG 2 ***1/2 (122 minutes) PG
There’s a lovely moment during the enjoyably dizzying swirl of Sonic 2 where one has pause to wonder whether Steven Spielberg and George Lucas had any idea when they were making Raiders of the Lost Ark just how iconic an image that giant ball chasing after Indiana Jones would turn out to be.

In one of the film’s clutch of typically hectic, VFX-heavy action scenes, the impressively Poirot-like mustachioed super-villain Dr Robotnik (Jim Carrey) finds himself in a similar spot of bother, running from a giant orb and screaming: “I don’t wanna die this way! It’s derivative!” (or summat like that)

It’s killer stuff, one of many golden lines spouted out by Carrey who, once again, is in full-on, over-the-top, cheesy scene-stealing mode as he sniggers, howls and quips his way through this zippy, well-lubricated sequel.

Eager to continue gracing the world with his quest to do good deeds, alien hedgehog Sonic (voiced by Ben Schwartz from Parks and Recreation) is nonetheless reminded by his fatherly best pal Tom (James Marsden) that he is still essentially a child and must learn that with great power comes the onus of responsibility.

As well as illustrating how deeply the Spider-Man ethos has taken root, the advice serves as a guiding beacon for Sonic as he does battle with Dr Robotnic in the search for a magic emerald that imbues its owner with the ability to transform thoughts into the real world. (Yes, just like in Ghostbusters, one of the characters duly acknowledges.)

Director Jeff Fowler, who did such a good job on the first one, dutifully replicates the pace and energy here, with the action upscaled to 11, including a climactic scene involving a monster robot so big it looks like it could snack on the cast of Transformers.

Though the film strictly follows the formulaic contours of the first film, it does deliver a sizeable delight with the performance by comedian Natasha Rothwell, who pulls off the impossible by being a hands-down scene-stealer in a film starring a veteran scene stealer such as Carrey. Two scene stealers for the price of one? Worth the price of admission alone.

As we all know by now, the hallmark of any good film based on a video game is that familiarity with the source isn’t necessary. (Come to think of it, that goes for any film adapted from any source.) You don’t even need to have seen or cared about the first Sonic film, to get a kick out of this new adventure.

Another super-sized serving of Sonic mayhem. What’s not to like?

Footnote: To his credit, Jim Carrey has used the press tour for the film to air his brutally frank views on the continuing saga about the physical violence Will Smith brought to the Oscars when he assaulted presenter Chris Rock. Carrey’s response appears to echo many who were there. Check it out. (There’s a little background sound, but it’s the cleanest copy on YouTube right now.)