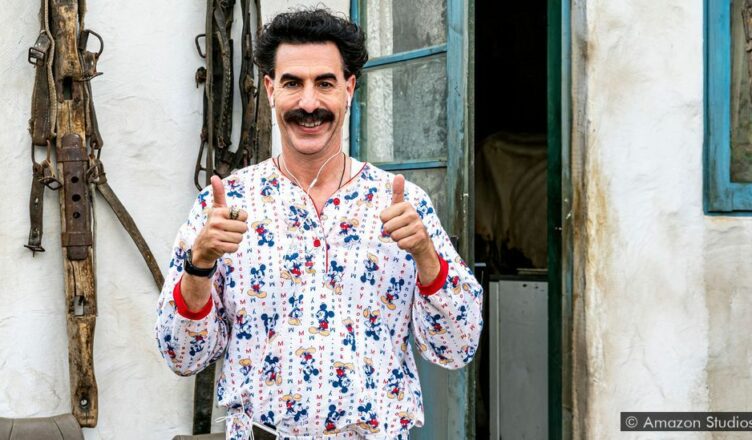 BORAT SUBSEQUENT MOVIEFILM *** (96 minutes) MA15+
It’s been 14 years since Borat shocked, thrilled and appalled us as Sacha Baron Cohen’s reporter from Kazakhstan tore through the American heartland with complete ethical abandon, pranking innocent people with his brand of extreme-stunt comedy.

In the very funny, not-quite-so-appalling but still ethically questionable Borat Subsequent Moviefilm we are offered something far more shocking than any of his tasteless pranks: namely, a story.

Yes, believe it or be damned: Borat 2 has an actual plot, character arcs and a third act. In what might be a touch of comic genius it even boasts a progressive message that has been cleverly tailor-made to temper, if not absolve, all its misdeeds, transgressions and gross violations of good taste.

Having ruined the reputation of Kazakhstan with the first film, Borat is ordered to return to America to make a peace offering to vice-president Mike Pence.

At first the gift is meant to be a monkey, but after Borat’s 15-year old daughter Tutar (Bulgarian actress Maria Bakalova, who is 24) stows away in his luggage, it is officially decided that she shall be Pence’s present.

As with Borat there are plenty of moments here where you’ll likely find yourself laughing despite your better judgement. If nothing else, Baron Cohen’s brand of shock comedy has a way of getting under your guard.

The highlight – or lowlight, perhaps – is when Borat and Tutar perform a “fertility dance” at a debutante ball. It’s truly disgusting and offensive and massively unfair to the innocent young people in attendance. It’s wrong wrong wrong. But bloody funny.

In another scene, Borat dresses up as Trump and crashes a Conservative Political Action Conference where Mike Pence is speaking.

Despite the time gap Baron Cohen slips back into his Borat suit with ease, though he has to disguise himself most of the time because Borat has become so recognisable.

But Borat 2 belongs to Bakalova who owns the film. She commits totally to Baron Cohen’s alt-comedy ethos, buying into his world with formidable gusto as Tutar morphs from being Borat’s oppressed “non-male son” to an independent woman who rejects the myths promoted in the sacred book given to her.

It’s quite a feat the way Baron Cohen deploys Tutar to ingratiate himself to the feminists he has spent so much time offending. His sincerity could be in doubt – Baron Cohen appears to take particular delight in offending women – still, it’s a prime example of having your cake and eating it, too.

Any fears that Sacha Baron Cohen has been hit over the head with a woke stick are allayed by other prank segments, such as when he crashes a synagogue dressed as a stereotypical Jew and celebrates when it is confirmed the Holocaust actually happened.

Though a few elements of the first Borat were scripted, much more of Borat 2 follows a clear structure charting Tutar’s transformation. There’s no official confirmation but it seems some “real people” were happy to provide key story points for the film.

Whereas Borat was a largely improvisational lark with a bit of story (about his love for Baywatch star Pamela Anderson – remember?), storywise Borat 2 is closer to Baron Cohen’s 2012 satire The Dictator, which also had a transformative character arc.

As luck would have it, Baron Cohen was filming Borat 2 as the Coronavirus was taking hold across America and so incorporates it along with the palpable Trump/anti-Trump sentiments on the street.

He was also lucky enough to ensnare former New York mayor and Trump legal advisor Rudolph Giuliani in an elaborate hotel room prank that has gone viral and given the film untold amounts of free publicity.

For the few who don’t know, Giuliani was tricked into taking part in a filmed interview with Tutar, who he thinks is a young news reporter.

After the interview during which Tutar behaves suggestively in a short, tight skirt, Giuliani follows her lead into a bedroom for a drink and to remove his mic. He thinks Tutar is 15, though actress Bakalova is 24.

The hidden camera footage, as edited, suggests Giuliani acted inappropriately. He touches her while helping remove her mic, then she touches him while removing his. This includes untucking Guiliani’s shirt from the front – a very intimate act.

We then cut to see Giuliani lying back on the bed, his hand repeatedly going down the front of his trousers. Is he tucking the shirt back in or is he engaged in a more lascivious undertaking? The ominous music that accompanies the footage suggests he was touching himself.

Borat then bursts in, yelling how the girl is 15 – “too old for you” – and Giuliani rushes out, asking a security guard “Who is this guy?”

Unsurprisingly, Giuliani went to the police and has taken to Twitter to insist that he was just tucking in his shirt, denying all allegations of impropriety.

Even less surprisingly, Baron Cohen has milked the incident for all it is worth, including posting a reply video as Borat pretending to defend Giuliani, and doing talk show appearances with Bakalova where he claims Giuliani’s creepy behaviour made him worry for her safety, though she never felt any threat.

The filming occurred many months ago, so releasing images of the incident in the few weeks before the US election has given the stunt great media traction. It also underscores Baron Cohen’s clear hope that the film will help push for regime change in the White House.

Giuliani has not hit back with a lawsuit, something Baron Cohen has long been used to. Though he went straight to the police, there’s been no legal fallout. Why? Probably because Giuliani signed a waiver before the interview. Also, in New York you can record any encounter with somebody, even secretly, so long as one person consents. So, it looks like Rudy is going to have to live with the embarrassment.

The estimate from Baron Cohen’s camp is that the incident has generated about a billion dollars’ worth of free publicity. That is hard to verify, but it would certainly be in the hundreds of millions. It has certainly messed up Giuliani’s Google results.

It is something of a revelation that Borat – the very embodiment of a sexist, racist, misogynist ignoramus – emerges from his latest American adventure a changed man.

It’s no revelation that Sacha Baron Cohen proves with Borat 2 that he is not just a daring, taste-defying, often galling satirist, but a businessman of unmatched opportunistic prowess.