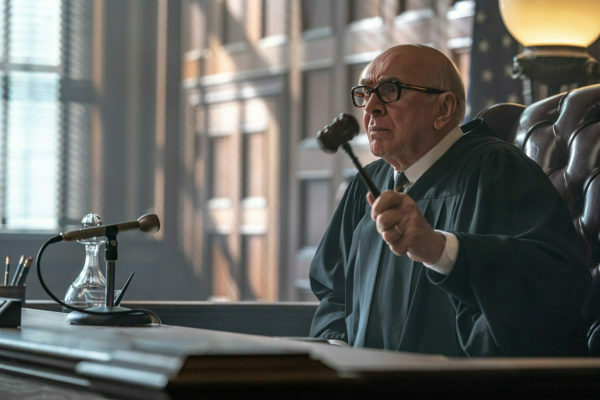 Hammer time: Frank Langella excels as a judge in ‘The Trial of the Chicago 7’.

THE TRIAL OF THE CHICAGO 7 ***1/2 (130 minutes) MA15+
Though it doesn’t quite rank as being among the most compelling of legal dramas – you have to go to The Verdict, And Justice for All, Inherit the Wind and 12 Angry Men for that – The Trial of the Chicago 7 nonetheless delivers a battery of punchy courtroom pyrotechnics and a cache of premium performances from an extraordinary ensemble cast.

Kinetically directed and written by dialogue-loving Aaron Sorkin (The West Wing; The Social Network; A Few Good Men), the film dramatizes the 1968 trial of a clutch of anti-Vietnam war protesters who were accused of conspiracy to incite violence at the Democratic National Convention where police and protesters collided.

It’s the second time at bat for Sorkin who acquitted himself so well with the 2017 Jessica Chastain vehicle Molly’s Game. Though most of the fiery drama plays out in the courtroom, Sorkin fleshes the story out beyond the witness box as both legal teams strategize and argue over their most effective course of action, with the accused protesters far from being of one mind. Extensive flashbacks capture the anatomy of the riot, incorporating archival footage with some very vivid recreations of the violence that took place.

Having long established himself as a masterly writer of sharp, witty dialogue – remember all the gags in A Few Good Men? – here Sorkin proves himself a superb director of actors eliciting a raft of fabulous, convincing turns.

Rising above the film’s impressive ensemble, however, is veteran Frank Langella as the irascible, no-nonsense Judge Julius Hoffman. He presides over the proceedings with an air of authority that borders on arrogance, leaving nobody in any doubt that while the laws being argued belong to the United States, the courtroom belongs to him. There are strong echoes of his Oscar-nominated work as President Richard Nixon in Frost/Nixon (2008) when he silences the room and tells everybody what’s what.

As for the timing of the film’s release, one could read a lot into the parallels between America’s civil tumult in 1968 and the social divisions that define the nation today, with rioting over issues of race, police brutality and social justice. In regards to highly tense situations being ignited by a single provocation The Trial of the Chicago 7 certainly rings true on several disturbing levels, making the film far more topical than its makers could have foreseen.