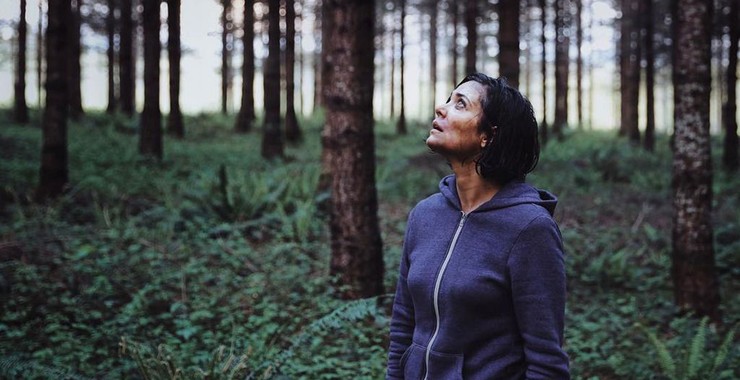 Into the woods: A woman is stalked by a psycho in ‘Alone’.

ALONE *** (98 minutes) MA
In a very nifty, left turn-loving thriller from John Hyams we encounter yet another young woman who finds herself in deep trouble deep in the woods in the dark heartland of flyover America.

Trying to deal with a life crisis, Jessica (Jules Willcox) packs her belongings into a trailer and heads off all by herself across the country with only her phone and her bad judgment for company.

She is, of course, prime psycho bait so it’s not long before she crosses paths with a guy (Marc Menchaca) who, of course, appears to be completely normal, but for his Ned Flanders mustache.

But then something truly weird and wonderful happens. The film breaks free of its beloved thriller-movie tropes and heads down a path full of unexpected twists and suspenseful turns.

Hyams – son of prolific journeyman writer/director/cinematographer Peter Hyams (Capricorn One; 2010; Timecop; Outland) – has a knack for holding shots and letting tension build though stillness and silence.

Written by Mattias Olsson, there are but a few vague whispers of motive that some might find irritating – it’s always satisfying to know why your psycho is nutso – and the film does wallow in some 1970s-style violence. Still, it’s a well-mounted venture.

Alone could also be taken as a cautionary tale for women who chose to travel all by themselves across long distances to take some creep mitigation measures before heading out, such as keeping a well-serviced .38 in the glove box. With a permit, of course.

On Foxtel and Fetch