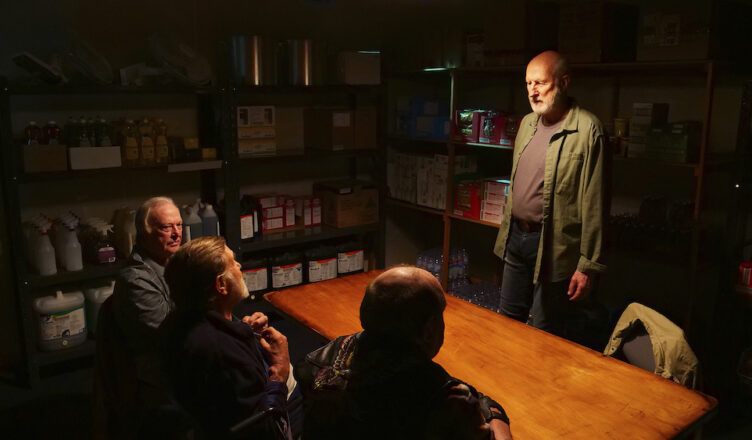 NEVER TOO LATE **1/2 (98 minutes) M
On offer here is a sweet, congenial, low-flying oldies-behaving-badly comedy as a quartet of Vietnam veterans plan a none-too-daring escape from their low-security nursing home.

Bronson’s initial selling point for the caper is sweet revenge as he tells the guys that the North Vietnamese prison camp commander they endured is still alive and resident at a nearby nursing home. The plan: escape from their nursing home, go to that nursing home, confront him and, presumably, kill him.

Unfortunately, the promise of that great premise evaporates when Bronson’s true motive is revealed; he wants to hook up with Norma (Jacki Weaver), an old flame he nearly married before he went off to war. She’s suffering from Alzheimer’s and he needs to get to her while she still remembers their romance.

It turns out each guy has their own reason for wanting to get out. Angus has a beef over some long-denied football glory he needs to reclaim; Jeremiah wants one final voyage on his beloved yacht; and James hopes to reconnect with Bruce (Shane Jacobson), his long-estranged son who keeps returning his letters unopened.

Adding to the mix is Hank (Max Cullen), another grizzled veteran who stumbles into the scheme by accident.

That’s a lot of star power holding together a whimsical, somewhat watery comedy concept and, to their credit, they play off each other nicely, breezing through the lark with a decent battery of one-liners, put downs and quips.

The stakes might seem trite, but director Mark Lamprell (working from a screenplay by Luke Preston) dials up the hard truth that each man is facing their final chance at bat, their last-ditch lurch at closure. This allows Lamprell to indulge in some sad moments of reflection that are smoothly worked in without becoming too maudlin.

It’s a film that works well on a mild vibe. Yes, it would have been great to have seen the revenge element play out, something that an American version of Never Too Late would no doubt have done. Indeed, in Hollywood hands the story would surely have been massaged into more of a caper-driven jaunt in the vein of Last Vegas and Going in Style, with the nursing home’s manager being made more villainous. No crime in that.

The mode of Never Too Late is more sedate and, arguably, more “Australian” by keeping the focus on the characters rather than the caper.

There’s no rule saying a film can’t have both, and a bit more drive in the plot might have heightened the adventure, broadened the comedy and expanded the film’s appeal to people under 50.

Given the restrictions on cinema releases imposed by the Coronavirus, Never Too Late has enjoyed a sweet take at the Australian box office, taking about half a million since its release on 22 October, sans Victoria.

Unlike the vast majority of Australian films, Never Too Late was subjected to many test screenings, a process almost mandatory for American comedies and something Mark Lamprell says greatly improved the film’s prospects of hitting with its target audience.

Lamprell is one of the few local film directors to concentrate on comedy, a realm where Australia’s record in painfully patchy. His other films include My Mother Frank, A Few Less Men and Goddess.

In this Skype interview Lamprell discusses the making and design of Never Too Late, which has already secured a deal in the US, and how different an affair it was after making the rather rude A Few Less Men, a critically lambasted film that, according to Lamprell and contrary to widespread belief, actually found a big enough audience to make it a hit.