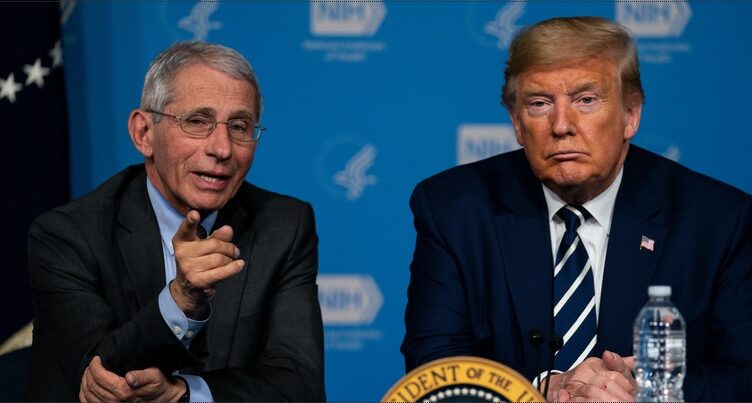 Crisis talk: Dr Anthony Fauci discusses the virus with his boss in ‘Totally Under Control’.

Even the most diehard and forgiving Trump supporters would have a hard time denying that his administration’s handling of the Coronavirus outbreak across the United States was a tad short of ideal.

Harder still would be denying the persuasive power of Totally Under Control, a cool-headed, detailed, thoroughly researched chronicle of the events early in 2020 where decisions taken by the Federal Drug Administration, the Centre for Disease Control and Trump’s crew of Covid officials turned a bad situation worse.

Using South Korea as a point of comparison, the film – directed by Alex Gibney, Ophelia Harutyunyan and Suzanne Hillinger – illustrates through interviews, documents and frequent use of incriminating news footage how the virus managed to get such a foothold in America.

From the film’s fire hose of facts, figures and quotable quotes – the title is taken from Trump’s repeated public assurances at the beginning of the pandemic – emerge two key themes.

The first is how the crisis was not spawned by a system failure but by greed, bureaucratic incompetence and – in an eerie echo of what allowed 9/11 to occur – the high-concept idiocy of departments not sharing information.

Thus, we beheld the singularly ludicrous and pathetic spectacle of the United States, with all its awesome industrial might, not being able to source enough personal protective gear, with masks becoming a symbol of all-encompassing ineptitude.

More disturbing, the documentary’s second and dominating theme speaks to a fundamental issue that has driven too much public discourse in the 21st century, namely the downgrading of expert opinion.

How different things would have been had more respect been shown for the common-sense advice championed by CV-19 Task Force advisor Dr Anthony Fauci; namely to “follow the science”. Cue the sad and sorry saga of Hydroxychloroquine, the miracle Coronavirus cure that wasn’t.

The release of Totally Under Control so close the US election is, of course, intended to sway votes. To the film’s credit, however, it spends its long running time diligently constructing its arguments before declaring, in its closing moments, what the best solution to the problem might be.