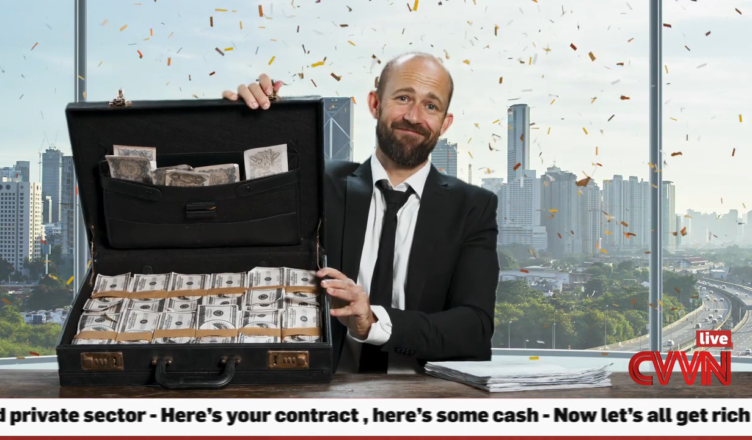 BIG DEAL *** (101 minutes) M
All in all, there really isn’t anything much in Big Deal, a well-made feature-length documentary exploring the cosy world of political donations, that should come as much of a surprise to anyone.

To wit, there’s plenty of detail illustrating how politicians are, by and large, though with a few noble exceptions, a terrible, ego-driven lot obsessed with hanging on to power at almost any cost.

Furthermore, Big Deal elucidates how when it comes to currying favour with politicians, guess what? Big business and piles of money will readily open doors that are usually shut to ordinary folk.

Really? What a shock.

That said, Big Deal nonetheless lands some sizeable punches as it takes an illuminating deep dive into a shadowy realm full of rubbery rules, unwritten understandings and influence peddling that has an extraordinarily high threshold of deniability because everything is technically above board.

Armed with an inquisitive energy, congenial persona and an over-arching fear that the what he discovers is worse than the American system, Van Vuuren processes the film’s rattle of facts, anecdotes, interviews and case studies into a pretty well-argued, well-packaged pro-change polemic that is palatable, even enjoyable, and sometimes downright funny.

Though Big Deal paints a none-too-happy portrait of asymmetrical access to people in power, a deftly measured lightness of touch keeps things from getting too morbid; the film’s home stretch serves up an uplifting instance of how good ol’ people power can turn the tables. Even the host’s fashionable cynicism is turned back on him.

And for the cherry on top, Van Vuuren sums up the system with a very funny song called She’ll Be Right. It’s a hoot, essentially compressing all the main points of the preceding 90 minutes into a compact three and a half. Kudos. (Check it out on YouTube here.)

Big Deal acquits itself well as an openly activist documentary, a long standing sub-genre adrenalized by the seismic influence of Michael Moore’s Fahrenheit 9/11 and Morgan Spurlock’s Supersize Me, both released in 2004, a game-changing year that proved how big documentaries could be at the box office.

The duty of any such documentary, of course, is to declare interests, put facts before agendas and maintain a fair-minded focus on exploring and exposing the truth. Thankfully that’s the case here because, as the aforementioned films proved, it’s not always.

Firstly, let’s face it, people: the era of the giant novelty cheque is over. Surely. It’s not that it’s cheap – nothing automatically wrong with that, mind – it’s just so cliched and ever so dated. After all, who writes cheques anymore? It’s all home banking, online money transfers and card taps.

Then there’s the issue of kids.

It’s noteworthy how personally invested Van Vuuren is in the topic, at one point revisiting a life-threatening medical issue he once had.

But does he really need to bring his children in to illustrate how many donations the two major parties get by building towers out of toy bricks? Come on, there’s a graphics department for that, so no need to corral the kids in as a gimmicky visual aid.

It really should be mandated that children too young to understand what a documentary is about shouldn’t appear in the documentary, especially if said documentary has a political tint. You go off and make your film. Leave the kids alone to play.

The third gripe about Big Deal is the most important of all: interviews over lunch don’t work on camera. We have to accept it, folks. It’s something Stan Grant taught us. You always end up with awkward editing around the eating, which looks terrible. Directors must decide: it’s interview or eat, not interview and eat. Do the interview before lunch. Or after lunch. Or while waiting for the coffee.

In fact, come to think of it, interview over coffee be much better than interview over lunch. Talk, sip, talk, sip. Very easy to edit. So, yeah. For on-camera interviews: Lunch: Bad; Coffee: OK.

Take note documentarians, wherever you are.