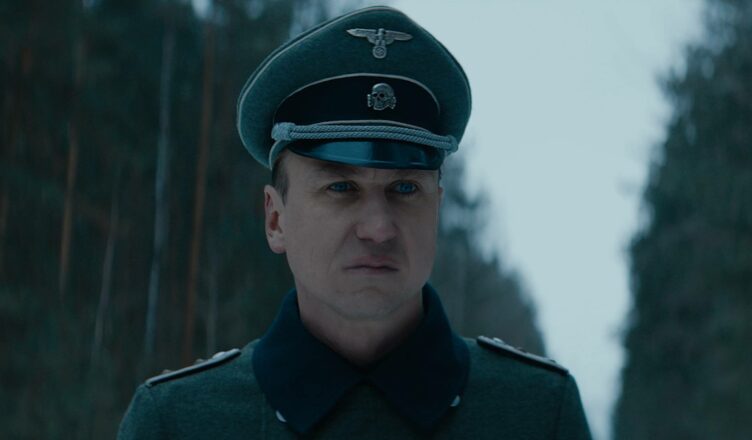 Wannabe chef: Lars Eidinger puts in a sterling performance as a Nazi in ‘Persian Lessons’.

PERSIAN LESSONS *** (127 minutes; subtitled) M
One of the most compelling themes common to films dealing with the Holocaust involves showing the lengths people will go to and the privations they will endure in order to survive.

In Persian Lessons, a fine drama propelled by some strong central performances, we get an unusual variation on the theme.

Having miraculously survived an execution – brace yourselves because the scene comes as a shock – Gilles (Nahuel Pérez Biscayart) desperately manages to convince a hard-to-convince SS guard not to machine gun him because he is Persian, not Jewish.

As Fate would have it, the concentration camp’s fastidious commander Klaus Koch (Lars Eidinger) is looking for a Persian to teach him Farsi, a skill that will allow him to live his dream.

His plan once Germany has won the war is to shed his bulky Nazi uniform, put on his chef’s hat and toddle off to Tehran where he can open a restaurant and leave all this grotty genocide business behind.

Such is the galling arrogance of a Nazi officer in 1942, when Hitler’s power was at its most pungent.

The challenge for Gilles, since he doesn’t speak a word of Farsi, is to fake it for as long as he can by making up an entire vocabulary. It’s a tough task made all-the-tougher by the Jew-hating Max (Jonas Nay), a camp guard who is convinced Gilles is lying and lobbies hard to Koch for permission to kill him.

It’s a challenge for any Holocaust film to spend so much time with a dedicated Nazi character and humanize them without losing sight of what a loathsome brute they are.

Yet director Vadim Perelman, who gave us the excellent 2003 racism drama House of Sand and Fog, makes us feel the odd, counter-intuitive bond that develops between the Nazi and his fake teacher.

While we don’t exactly feel sympathy for Koch, he is at least developed enough to rise above the Nazi cliché he could so easily have been.

We also get a sense of the day-to-day running of such a ghastly place, something rare in Holocaust films. Young Nazi officers chat to each other in the canteen, take smoke breaks and discuss romance, a reminder that many of these horrible people were barely adults.

The matter-of-fact approach serves to make the casual cruelty of the Nazis all the more brutal and disturbing. One scene at an officers’ picnic shows the severe beating of a prisoner as a bit of entertainment.

As Gilles, Nahuel Pérez Biscayart is suitable sallow and anxious, constantly dreading that his ruse will be uncovered and he’ll be summarily executed. Jonas Nay registers some chilling moments as the Reich-loving Max, ever-keen to do the deed.

Nonetheless, it’s German actor Lars Eidinger who really elevates the film with his sterling performance as the Nazi officer Koch. He manages to imbue substance and depth into a character who is truly deplorable and whose final scene in the film is quite memorable.

Much work has gone into the movie’s period recrestion; the hooked barbed wire fences; the guards; the clothing; the disgusting sleeping quarters; even Hitler’s portrait shimmers in the background. One key detail the film gets absolutely right – we saw it in Schindler’s List – is the use of vicious dogs to terrify prisoners and keep them in check.

The film’s somewhat bizarre premise is, according to the opening credits, inspired by real events. That might be tough for some viewers to totally swallow; the film does have a few plausibility creaks, the main one being how long Gilles is able to sustain his masquerade.

Still, Perelman injects enough grim realism into the story to make it believable, thanks chiefly to the lead turns, with the magnetic Eidinger doing most of the heavy lifting by portraying a very difficult character without opting for the easy route.