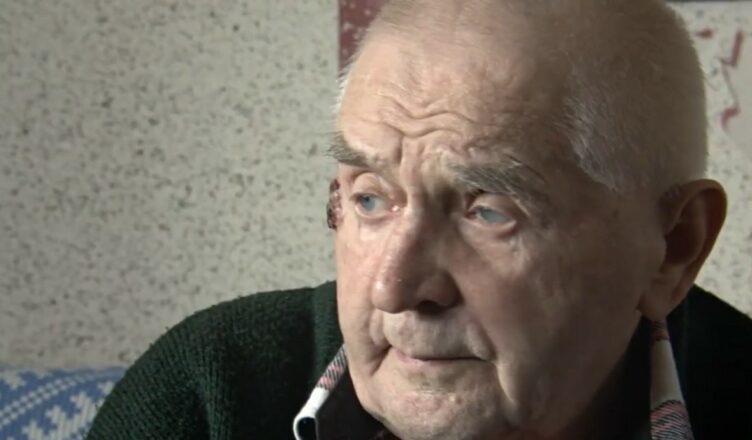 In recreating the barbarity he has witnessed, a series of stuffed toys are hung by the neck from a miniature gallows and set on fire. Without commentary, we watch as they slowly burn, prompting us to wonder what inspired such a macabre piece of home movie theatre.

There are other instances in the series where images are allowed to speak for themselves.

One sequence involves a group of civilian men neatly arranged in a square pit that is about to become their grave. First they are seen standing, then lying down as the death squad commander steps down and stands on their backs, posing like a proud game hunter on his quarry.

Einsatzgruppen was the collective name of the SS units tasked with executing Jewish communities during Hitler’s push into the Soviet Union, known as Operation Barbarossa.

As the German army advanced, the death squads followed in their wake, systematically shooting entire Jewish populations across Nazi-occupied countries such as Hungary, Estonia, Lithuania, Latvia and Ukraine. The killings later became known as the “Holocaust by bullets”.

The series offers a graphic, detailed, humanistic chronicle of the atrocities, which still remain staggering in their scale. In Ukraine at Babi Yar, a ravine just outside the capital Kiev (Kyiv), more than 33,000 people were killed in two days. In Latvia’s Rumbula forest, some 25,000 people were shot, also in two days.

A chilling point stressed in the first episode addresses the composition of the SS command. While many of the underlings and collaborators who did much of the dirty work were thugs and criminals, their Nazi commanders were not brutes but cultured, educated men, often with university credentials and intellectual bearings who could articulate their orders and the rationale behind them.

Prazan, who wrote the series, also counters the long-standing myth that the Wehrmacht (the regular German armed forces) was somehow distanced from Nazi atrocities.

In fact, records reveal in ghastly detail just how complicit the Wehrmacht was during Operation Barbarossa in the annihilation of villages and the liquidation of their inhabitants.

And the series shows how centuries of anti-Semitism resulted in the Germans receiving enthusiastic support from the authorities in freshly occupied countries; police and volunteers were eager to co-operate with the Nazi death squads, often offering to do the murderous work and leaving the Germans to an organizational and observational role.

If the series achieves anything, it’s in showing how cold-blooded and clinical the Nazis were. Driven by a need for efficiency, the work of the Einsatzgruppen involved developing techniques of mass-murder that became the template for the rest of the war. One particularly appalling diagram illustrates how to shoot people on the edge of a trench, complete with measurements and estimates of how many could be slain per hour.

Facts, figures and timelines aside, it is the collection of remarkable, deeply affecting testimonials from witnesses, survivors and participants that propels the series, putting a human face on the events.

One old woman recalls how, as a young girl, she witnessed the killings at Babi Yar at close range from her attic window. Survivors tell extraordinary tales of playing dead as they lay beneath piles of corpses.

Captured on hidden camera, one former SS soldier details his experience as part of a death squad, with just a hint of sorrow tinting his account.

Perhaps most disturbing of all these testimonials comes the recollection of a former Lithuanian soldier. As one of the executioners he recounts how he sought to kill victims in the most “merciful” way possible, especially when it came to slaughtering children. The remorse of his actions clearly weigh heavily on him.

Still, if anything in the series is likely to interfere with your digestion, it’s this appalling passage.

The final stretch of the series makes clear that Einsatzgruppen, while providing an overview of this chapter of the Holocaust that is comprehensive, graphic and moving, is intended not just as a chronicle, but as a warning.

Having been shown footage of the Nuremberg Trials, we are reminded how very few of the death squad killers were ever brought to justice, and how the present-day rise of Neo-Nazis challenges any of the “never again” sentiments often roused when remembering the Holocaust.

All the more troubling is that the situation reflected in 2009 is much worse now, with “White Power” and anti-Semitism now embedded in the news cycle.

Whatever hopes the makers of Einsatzgruppen may have had that this message would date over a decade, the worrying reality is that the opposite is the case.

Oddly, the series has a very faint online presence. There is no Wikipedia page, no Rotten Tomatoes page and barely any reviews (there’s a recent one from The Irish Times late last year, but that’s about it).

So, a sincere nod to Netflix for hosting this excellent documentary series.