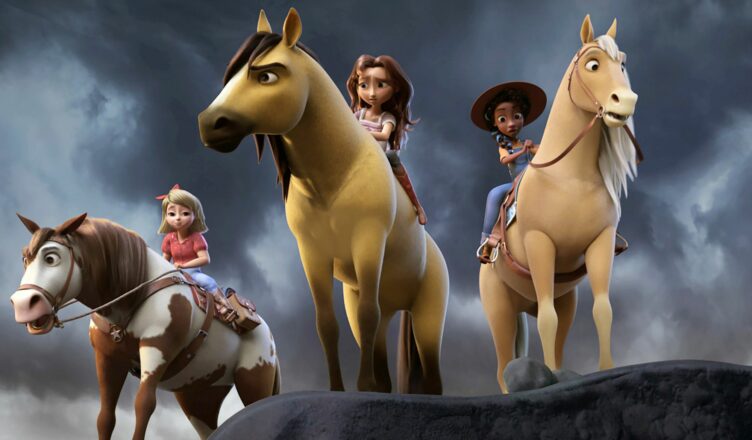 SPIRIT UNTAMED *** (88 minutes) G
Long before it even reaches its half-way point, the Dreamworks animated feature Spirit Untamed confronts you with one big, rather rhetorical question: what horse-loving girl from the age of about 14 down is not going to love this movie?

That’s a bit restrictive, of course. Girls over 14 who love horses will most likely get a huge swoon from the film.

It’s also a safe bet that a goodly proportion of girls who, heretofore, have not felt one way or t’other about horses will find themselves entranced by how these marvellous beasts embody the life-affirming qualities of strength, independence, freedom, defiance and bravery.

Indeed, if ever there was a sturdy cinematic icon that neatly packaged all the values the #metoo movement would surely love to instill into young girls, it’s the horse – in particular the titular star of Spirit Untamed (even though it’s male).

Obeying the basic rules of the genre, the film proudly takes its place in that long, long line of girl-loves-horse movies you can trace all the way back to the young Elizabeth Taylor and her magnificent nag in 1944’s National Velvet.

We meet our heroine Lucky Prescott (Isabela Merced) as she moves to the burgeoning frontier town of Miradero, where her father Jim (Jake Gyllenhaal awaits), having not seen her since the passing of her horse-loving mother.

En route she sees a beautiful horse running free behind the train. Thus begins her undying infatuation with the creature, which she sees again in the town’s corral being broken in by a bunch of meanie wranglers lead by Hendricks (Walton Goggins), a ruffian who likes lording it over horses and being nasty to little girls.

Getting up close and personal with the horse, Lucky sees in its desire to be free a kindred spirit, so she conspires with her new friends Pru (Marsai Martin) and Abigail (Mckenna Grace) to set the horse loose.

Unfortunately for them, what seemed like a simple unlocking-of-the-gate deal turns into a far more complicated and dangerous enterprise necessitating a trek across the treacherous and rocky wilds to fulfill their vow to the horse and to each other.

There’s not much point denying that Spirit Untamed does have the stamped out, colour-by-numbers feel of corporate movie making to it. Still, the breezy pacing, cheeky humour and positive messaging about friendship, family and freedom instill a lot of warmth into the proceedings, all set to some very pretty animation.

Thus, we have a subversive fantasy action sequence mocking the emergence of the newly-minted “Mary Sue” cliché; that is, a female archetype so meticulously designed to counter the traditional, male-oriented portrayal of girls that she comes across as a faultless, all-capable blancmange, a parody of feminine virtue produced by well-meaning if misguided over-correction. It’s pretty funny.

So, where does all this appealing to girls leave boys? That’s easy. Since the phenomenon of Frozen any remaining reluctance boys had to enjoying adventures with girl heroes melted like an ice cream on a hot footpath.

Of course, whether there was any such resistance in the first place has long been a matter of doubt, especially where horses are involved.

After all, boys love horses too, regardless of who’s riding them.