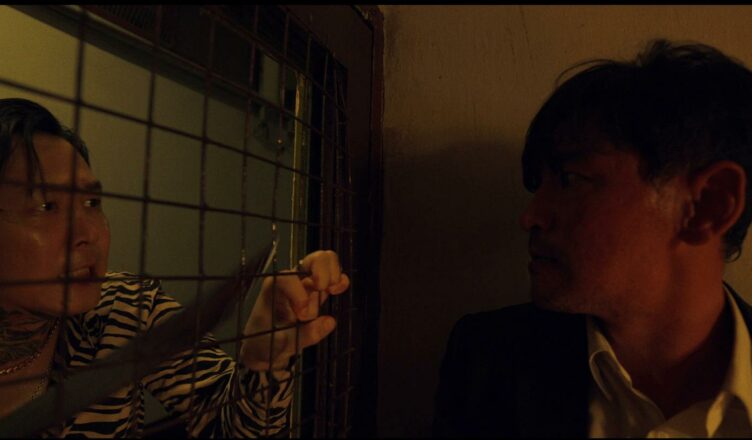 Hey there: Two professional killers face-off in the action film ‘Deliver Us From Evil’.

Deploying the age-old cliché of the world-weary guy with one more job to do before retirement, we meet professional killer Kim In-nam (Hwang Jung-min). He’s persuaded to locate and retrieve Yoo-min (Park So-yi), a nine year-old girl taken by some loathsome sods who see children as a great way of making money on the blacker-than-black organ harvesting market.

Saying Kim has his work cut out for him is an understatement; for this guy just climbing the stairs can rack up a huge body count of bad guys, each of whom patiently wait their turn before confronting our reluctant hero.

Making matters infinitely worse is Ray (Lee Jung-jae), a blood-thirsty, gun-loving, sartorially splendid hitman who is none-too-pleased that Kim killed his brother. He’s itching for revenge with the aid of an arsenal that includes knives, heavy automatic weapons and a seemingly endless supply of grenades.

The film’s action sequences are fabulous. Driven by a dizzying kinetic energy and a need to shoot and destroy everything in sight, Kim nonetheless adheres rather admirably to a Hitman Code of Ethics that has him firing warning shots into the air to clear a street of innocent bystanders before pumping bullets through the windscreen of an approaching enemy car. Talk about a sensitive new-age killer.

His nemesis has no such restraint. Resplendent in a Tom Wolfe-white suit complete with snappy Race-day shoes of fashionable white, Ray is a one-man blitzkrieg, knifing and shooting and blasting his way through whomever and whatever gets between him and his target.

As with so many Asian action films, of now and of yore, there is a no-nonsense, straight-faced approach to the storytelling in Deliver Us From Evil; the sharply edited, ferociously mounted action sequences, with their graphic staging and love of bloody detail, have a distinct edge that delivers a visceral punch missing from most (though not all) action offerings from Hollywood.

Still, there must be meaning to the marauding, or else the whole affair descends into a pointless dance of bullets and stabbings.

To that laudable end, Hong Won-Chan manages to sustain a slender but consistent emotional line through all the explosions and blam-blam so he can end things with a neat emotional punch that helps justify all the intricately staged violence that has preceded it.