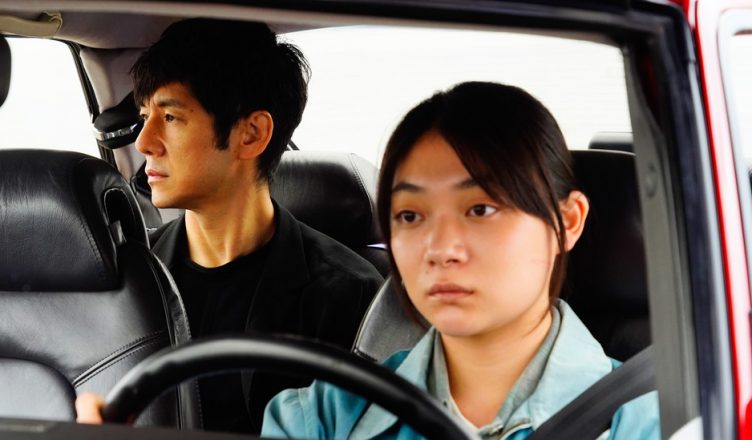 DRIVE MY CAR ***1/2 (179 minutes; subtitled) MA
Stuck in a car for two hours a day, theatre director Yūsuke (Hidetoshi Nishijima) gradually grows close to his taciturn driver Misaki (Tōko Miura) as she drives him to and from the Hiroshima theatre company where he is staging an avante-garde production of Anton Chekhov’s Uncle Vanya.

Both souls are in various stages of grieving: Yūsuke over the sudden loss of his screenwriter wife; Misaki over the death of her mother in a landslide.

It’s a long, meandering journey of gradual revelation, but don’t be intimidated by the film’s length; director Ryusuke Hamaguchi paces the unfolding story in carefully judged emotional increments, using the awkward intimacy born of forced proximity to create an emotional landscape about loss, guilt and infidelity.

In absolutely no hurry to get anywhere, Hamaguchi seduces us into Yūsuke’s headspace with long dialogue scenes, brooding camerawork and a tantalizing drip feed of detail peeling back the nature of his relationship with his screenwriter wife Oto (Reika Kirishima).

We slowly discover their unusual creative method, how she would blurt out ideas during sex that he would then recite back to her. Oto was also a bit of a mans’ lady, fooling around when Yūsuke wasn’t around, but for the one time a cancelled flight saw him return home early to find her at it with a younger man.

Unseen by her and discrete to a fault, he quietly withdraws and heads to a hotel.

Long rehearsal scenes for Uncle Vanya see him working through his creative process as a young actor Takatsuki (Masaki Okada) becomes somewhat infatuated with him.

The car’s backseat becomes a de facto confessional space as Takatsuki speaks about his awe for Oto, denying he ever slept with her, a declaration that only deepens Yūsuke’s suspicions.

The dynamics of this closed space work on his relationship with Misaki as she obediently drives him about in his red Saab, their secrets slowly emerging as they question each other.

Those willing to invest the time in this fine drama will no doubt respond to and appreciate the slow-burn style of Drive My Car.

As for crediting the film with Chekhovian profundity, that’s probably going a bit too far. The film is rich in themes, yet the emotional through lines are kept fairly simple, adding to the subtle beauty of the film’s overall feel.

The film is an expansive adaptation of the 30-page 2014 short story Drive My Car by Haruki Murakami from Men Without Women. The author skipped attending the film’s premiere, opting instead to catch it at his local movie house. He enjoyed it, apparently.