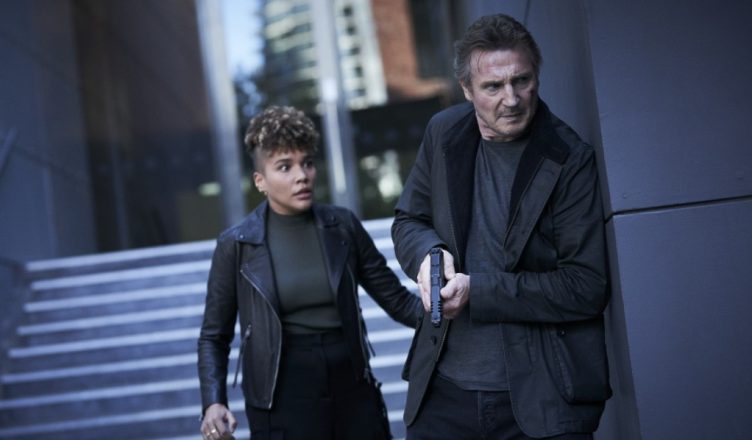 BLACKLIGHT * (104 minutes) M
There is obviously a powerful rationale behind the seemingly endless Liam Neeson Action Movie Franchise, no doubt to do with how these relatively low-budget adventures sell well and sell easily in markets that love the sight of a 70+ year old actor playing an action hero who takes out the bad guys while trying to prove himself a good person.

And, let’s be nice, there have been some pretty good Liam Neeson action movies of late. The Ice Road, for instance, wasn’t so bad. Cold Pursuit, too. That was OK.

Directed and co-written by Mark Williams, who also steered Neeson through the not-very-good Honest Thief, the film is set in Washington DC, though the film was shot in Australia – and you can friggin’ tell.

Wearing his signature scowl and cantankerous as usual, Neeson plays FBI agent Travis Block whose unusual job is to extract deep cover agents who have gotten a little too deep into the roles they were playing.

Dirty work’s afoot inside the agency, headed by a silver-haired dude Gabriel Robinson (Aidan Quinn), which is finding reason to knock off innocent civilians.

There’s a conspiracy of silence, of course, and a loose cannon called Dusty Crane (Taylor John Smith) is on the verge of blowing the whistle to journalist Mira Jones (Emmy Raver-Lampman) unless Block can get to him first.

Cue plenty of running around and gunplay with henchmen doing that cliched action-movie thing where they walk around while pointing pistols and automatic weapons. (Anyone who saw The Tomorrow War on Netflix will see how Chris Pratt has got this move down pat.)

There are also a few lumbering vehicular chases that fall squarely into the “seen that; what else you got?” category of action movie staples. The early one involving Liam chasing a large truck has a few moments but seems to have trouble moving.

The film’s tangled plot is a stumblebum affair that simply becomes lazy. At one point Liam actually says something like “Hey there’s a locked box in his office that has all the answers we’re looking for”. That’s called a deus ex machina, a storytelling device harking back to Ancient Greece that suddenly appears out of nowhere to help resolve a plot. It’s seen as a sign of poor storytelling.

While all this is going on, Block is also trying to prove himself a good father to his daughter Amanda (Claire van der Boom) and a good granddad to her daughter Natalie (Gabriella Sengos). Standard action man who is also a family guy. Thank you, Harrison Ford.

Much has been made about how this Hollywood film was shot in Australia, with a lot of it filmed in Melbourne.

While such transplanted productions are certainly good in creating work for local film industry talents – no issue there – what matters is what you see on the screen, and in the case of Blacklight it ain’t all that flattering.

The film’s thin production values have a distinctly cranked-out look, with many exteriors set in confined corners or locked off streets that all seem to have the same red taxi in the background.

The sense of place just isn’t there. Here’s the thing:

Even if you’ve never been to Washington D.C., we’ve all seen enough establishing shots on The West Wing, documentaries about JFK and reruns of The American President to have a rough idea what the place looks like.

And it doesn’t look like Melbourne. Or Canberra. You don’t have be familiar with either town to twig that Blacklight wasn’t shot in the city where it’s supposed to be set.

Some of the interior scenes showing buildings in the background are often embarrassing to behold. Same with many exteriors that pretend that a park is a park, a bridge is a bridge and a building is a building no matter where you are.

In particular, there appears to be a clump of edifices in Melbourne that are apparently generic enough in their design they can stand in for any old building in any old city. It just ain’t the case.

If only filmmakers would stop doing this. Please. Try as you might, you can’t make a Melbourne skyline look like any place other than Melbourne.

It raises an important question: why can’t an allegedly big production like Blacklight do better?

Is there not green screen and motion tracking technology that can render a realistic background for scenes set in an office or a home? Is it really out of the question to recreate the feel and light of a place like Washington D.C.?

And you can take it as said that draping American flags all over the place is as sure a giveaway sign as any that wherever this film was shot, it wasn’t America.

Oh, one other thing. Old-schoolers might remember a long time ago when the local industry was finding its bearings that one of the things nobody wanted was for Australia to become a backlot for Hollywood pictures.

Yet that is precisely what Australia has become. There are obviously huge upsides, such as the seasoning of local talent and the use of world-class facilities.

Part of the downside, however, are mediocre productions, such as Blacklight, that don’t exactly make you want to boast that they were shot here, even if they weren’t set here.