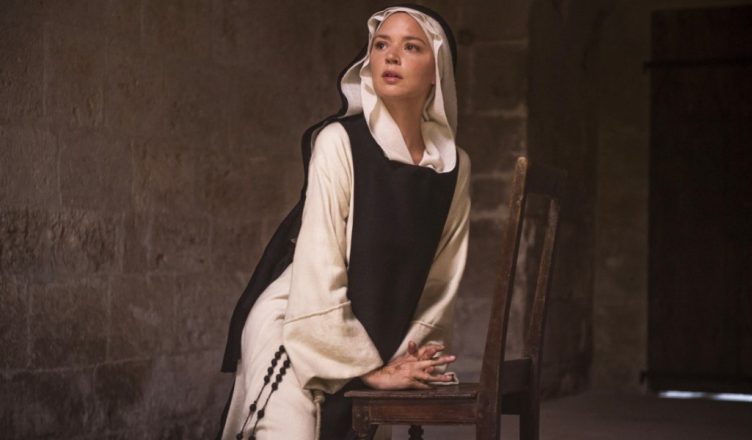 Offered to the architecturally imposing wives-of-Christ processing facility by her desperately poor father, Benedetta (Virginie Efira) is taken in by Head Nun (Charlotte Rampling), hoping to mold the rough young lady into a model of God-fearing modesty and religious devotion.

Nice idea until the arrival of the rebellious, sexually abused Bartolomea (Daphne Patakia) who, through her fast, if hard-won friendship with Benadetta, ironically finds a freedom of spirit within the high walls.

The discipline issues that ensue with the pair don’t sit well with Head Nun. Matters quickly escalate when, for the first time in her life, Bartolomea is told by Benedetta that she is beautiful.

The two become roommates, their beds separated by a tantalizingly transparent veil that stimulates Bartolomea’s interest in the naked female form, and in exploring it.

Upending the order of things with this order of nuns comes the revelation that Benedetta is blessed – or cursed – with stigmata.

At the most opportune moments, her body seemingly becomes possessed, her voice deepens and the bleeding wounds of Christ on the cross – that’s a nail punch in each hand and foot and a stab in the side for those who were too busy averting their eyes during The Passion of the Christ – appear on her.

This rather gory “miracle” allows Benedetta to become Head Nun, landing her all manner of power and privileges, including a large, split-level room that she shares with Bartolomea.

Left alone in the privacy of their lush new digs, these two beautiful women give full vent to their desires for each other, all with the help of a little helper Bartolomea has thoughtfully carved from a repurposed religious figurine.

Needless to say, what these two get up to isn’t strictly within the rules of the convent. Nor are they safe from the gaze of former Head Nun, now known merely as Sister Felicita.

She doesn’t believe the stigmata is on the level, obviously resents all the girl-on-girl action going on at the other end of her peep hole, and is keen for some payback.

Her quest for revenge takes her to high-ranking Catholic official The Nuncio (Lambert Wilson), who heads to the convent just as a plague breaks out. He’s charged by God to examine what’s going on. With that divine authority come assistants schooled in the art of torture.

Solid direction from Verhoeven instills the proceedings with a heft that elevate the film a few notches above the trashtastic romp it could have been in lesser hands.

There is certainly a transgressive edge to the sex scenes and an alarming degree of horror when the tortures begin, heightened by using the Hitchcockian device of implying what’s going on rather than being explicit..

Sporting big producxtion values, Benedetta does have the magnetism of a ripping yarn, with terrific performances from the leads and great use of locations.

And when it comes to payoff scenes, Verhoeven sure knows how to deliver, giving us a terrific finale that, through a stirring example of people power, puts those who abuse power in their rightful place.

One quibble, though: the film is based on the book by Judith C Brown called Immodest Acts: The Life of a Lesbian Nun in Renaissance Italy. Now that’s a ticket-selling title.