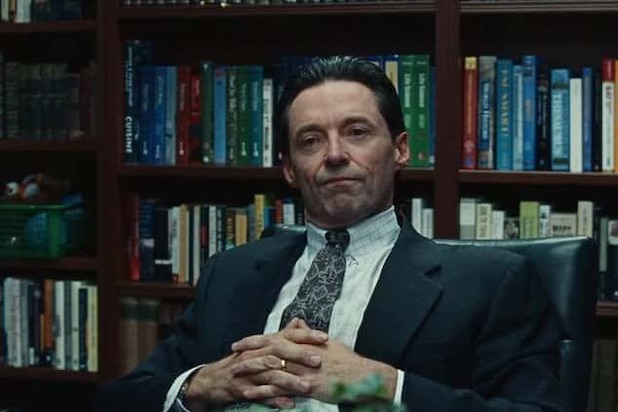 BAD EDUCATION ***1/2 (107 minutes) MA
It’s a generalization, of course, but most films dealing with education tend to champion the positive and inspirational aspects of school life, of how teachers can change lives for the better, of how even the most down-trodden students can rise above their circumstances, given the right leadership.

Bad Education does not fit neatly into that pattern.

Set in the early 2000s and based on a true story, Bad Education takes us into the modest corridors and offices of Roslyn High in Long Island, New York.

Once considered a sub-standard dump, the place might not look like much – its ceilings leak – but its community standing has been transformed into a shining example of scholastic redemption.

The school’s new-found success with its students and the local officials who keep passing its growing budgets are due to aggressive can-do management by its slick superintendent Frank Tassone (Hugh Jackman) and his hard-working assistant Pam Gluckin (Allison Janney).

For much of the film’s opening reel nothing appears to be wrong at the school as everyone shuffles about getting on with things, processing paperwork and counselling students.

Then, in a tiny, unguarded moment, Tassone offers a word of advice to Rachel (Australian actress Geraldine Viswanathan), a student reporter doing a piece on a proposed walkway, an ambitious project that will arc over the school.

She sheepishly admits it’s a non-critical “puff” piece, yet Tassone suggests she should follow her nose and go in stronger and do some investigating.

Why he does this is never explained but it turns out to be a cataclysmic error of judgment, a pebble in a pond with ripple effects that swell into a tsunami.

Following his advice she begins uncovering details that point to misappropriation of funds and criminal misconduct involving senior management.

The pacing of the snowball effect is exquisitely judged, beginning slowly before gathering speed until the scandal begins claiming scalps and exposing a long-standing culture of neglect and opportunism.

Despite what much have been a strong temptation to take the sarcastic route of Alexander Payne’s vaguely similar 1999 high school satire Election, director Cory Finley (who did the laudable black comedy Thoroughbreds) takes a straight bat to the shenanigans.

The slow reveal of the nature and extent of the crimes is engrossing, as are the attempts to cover them up as Finley applies increasing emphasis on what emerges as the film’s key theme, namely the wholesale abuse of trust innocently invested in Tassone and Gluckin by the students, their parents and colleagues. Most aggreived among these collateral victims is school board head Bob Spicer, played nicely by comedian Ray Romano.

Finley elicits top-shelf lead performances from Janney, who roils at being exposed, and especially Jackman who puts in great work on par with his underrated turns in Prisoners (2013) and The Front Runner (2018), in which he put in an Oscar-worthy portrayal of scandal-ridden Democrat Gary Hart.

Now deep into the post-Wolverine phase of his career, Jackman, 51, leans heavily into his age, using it to highlight the vanity of someone for whom genuine accomplishment comes with a sense of entitlement to reward himself and his accomplices.

Most telling in what is essentially a cautionary tale is the film’s illustration of how large-scale corruption does not instantly come into being. It starts small and grows by increments that its perpetrators can easily overlook and dismiss. It is only the cool eye of others that suddenly shift matters into a new and damning perspective.

Though the cinematography is not ostentatious, it offers a prime example of the camera as storyteller, with many key plot points being conveyed visually. Kudos to Lyle Vincent.

One notable example occurs in a tracking shot as Tassone arrives at school one morning, oblivious to how the expressions on the faces of the students behind him signal that school today will not be the joy it usually is.

It is often the case – as Richard Nixon so infamously demonstrated to the world – that those caught at the core of a corruption scandal either think they’ve done nothing wrong or had their hands forced by circumstances.

Whatever the case, the contention of those caught with their mitts in the till is that what they did somehow served the greater good. Such rationales demonstrate the power of denial, a theme that runs thick and fast through a biting drama about how just a little bit of power can do a whole lot of wrong.