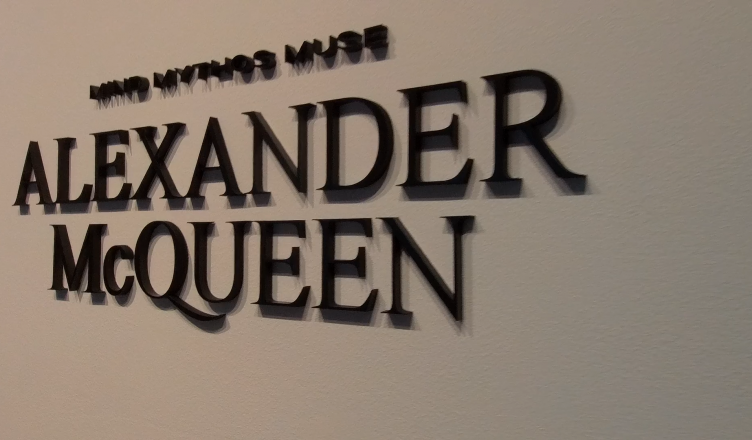 Good, not great: The Alexander McQueen exhibition @ NGV is all about the work.

Fans of the influential, notorious fashion designer Alexander McQueen will no doubt revel in Alexander McQueen: Mind, Mythos, Muse, the new exhibition at the National Gallery of Victoria that brings together more than 120 items, including, gowns, dresses, garish headpieces and precarious high heels of such bizarre design they serve as tribute both to McQueen’s unconventional approach to design and to the models who were somehow able to walk in them without losing their elegance or their balance.

Comprising a large part of the exhibition are video presentations of runway shows and McQueen at work, along with a large selection of backstage photographs taken by renown photographer Robert Fairer.

When it came to influences, McQueen was something of a bowerbird, drawing upon art, pop culture and cinema for inspiration. His deep love for Stanley Kubrick’s Barry Lyndon is featured in the show, as are the works by other artists who inspired him.

Combining works from the NGV and the Los Angeles County Museum of Art, the exhibition will surely hold immediate appeal for McQueen devotees and fashion connoisseurs.

For newcomers and those art world wanderers looking to have their curiosity greeted by an exhibition that dazzles and intrigues, the show might well prove a tad underwhelming.

While some of the creations and items are eye-catching, there’s no real “wow” factor; McQueen did outfits for David Bowie, Lady Gaga and Bjork, but there’s little reflection of that star wattage in the show. How great it would have been to see the Union Jack coat McQueen co-designed for Bowie’s 1997 Earthling album and tour.

The exhibition is also front-loaded with video panels and behind-the-scenes photographs (by Robert Fairer), so it’s not until you’re deep into the show that you get into the garments. Perhaps the audio-visual aspects should have been more broadly integrated across the exhibition.

Though the exhibition covers the evolution of McQueen’s work, it sidesteps the sadder aspects of his life regarding drug abuse, issues with depression and his tragic suicide by hanging on 11 February 2010 at age 40. There was no mention of it in the introductory address given by NGV director Tony Ellwood at the media preview.

This was not an oversight but a deliberate decision. NGV senior curator Kate Somerville explains, quite reasonably, how this was due to the show’s focus on McQueen’s creativity and originality. (She addresses the issue in the attached interview reel).

Still, a simple panel marking McQueen’s passing and personal troubles could have made a valuable contribution to the show, a sobering reminder of how fame, success and artistic brilliance are no safeguard against the devastating effects of affliction or addiction.

Below are three video pieces compiled from the media preview on Friday 9 December, 2022.

The first is a general overview (7 mins), followed by the full interview reels with Katie Somerville, NGV Senior curator of fashion (8 mins), and Robert Fairer, the widely esteemed fashion photographer who covered the backstage scene at 30 of 36 McQueen shows (4.5 mins).

The exhibition is on until Sunday 16 April, 2023. Go here for tix and more info.