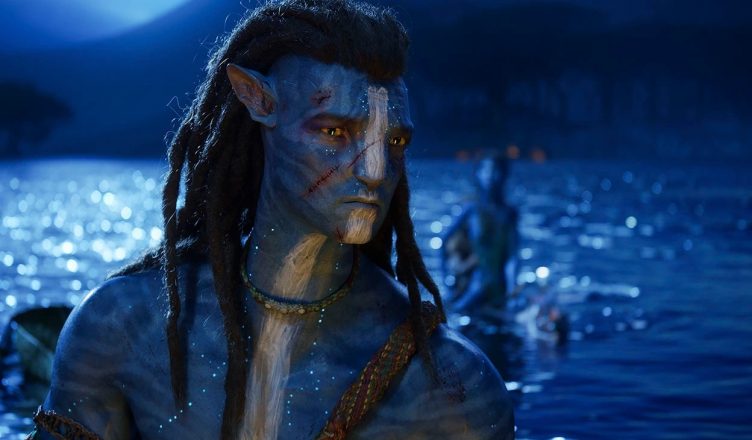 Back again: Sam Worthington returns as Na’vi hero in ‘Avatar: The Way of Water’.

AVATAR: THE WAY OF WATER *** (192 minutes) M
You would have thought by now, given all the trouble they had doing battle with the Na’vi in the first film, that some 13 years hence the “Sky People” would have fixed the design problem with the cockpit windows on their aircraft and made them impervious to the impact of low-velocity wooden arrows.

Alas, as we clearly see in Avatar: The Way of Water, they have learnt nothing from experience. For while they return en masse to the planet of Pandora with wonderful new automated technology that can build cities at breakneck speed, they still seem to be using the same sub-standard contractor for the double-rotor choppers we saw in the first film.

As we see in an early battle scene, just one Na’vi arrow is enough to pierce through the cockpit and send the crippled aircraft hurtling to the ground, its descent punctuated by the inevitable fireball.

That pretty much sets the tone for much of the action in Avatar: The Way of Water, James Cameron’s long-anticipated sequel to his 2009 hit Avatar.

Like the first film, Avatar 2 is a flourish of A-double-plus production values and stunning state-of-the-art visual effects wrapped around a B-movie action melodrama. It’s the epitome of post-content cinema – a term Cameron deeply resents – where story comes second to spectacle and the wholesale appeal to basic emotions.

Operating on precisely the same level as the first film, we see noble native warriors do battle with “The Sky People” who, having been booted off the planet, have come back from Earth with their giant machines to exploit the resources of Pandora and build settlements.

Among them is an Avatar version of Colonel Miles Quaritch (Stephen Lang), the nasty sod who was killed in the first film.

As explained early on with cringe-worthy, back-pedaling awkwardness, in Avatar World a person’s memories and consciousness can be copied before they go on a dangerous mission so in the event of their death, their essence can be implanted in a clone.

So, basically Quaritch is the same character, but in a Na-vi body. He has a squad of similarly cloned soldiers on their mission to locate and kill Jake Sully.

Sully (Sam Worthington, whose performance is all motion capture here), is now a full-on Na’vi with a family of four feisty kids he has had with Neytiri (Zoe Saldaña).

They’re all happily living with the Na’vi community and in harmony with the natural spiritual oneness of the planet’s universal lifeforce that binds together all living things – people, plants, animals – on Pandora. (Still can’t figure out why George Lucas hasn’t sued over this obvious lift of The Force. Ah, well.)

Still, neatly incorporated into his peace-loving family life, Sully is still a Na’vi warrior leader who conducts raids on the Earthlings, destroying their trains with ease and bringing down their heavily armed assault helicopters with arrows.

Of course, while every Na’vi arrow finds a target, the Sky People can furiously fire hundreds of rounds, yet never seem to hit anything. It’s an on-going irritation carried over from the first film, especially given how the Na’vi are extra large, which should make them easier targets.

When word gets out that Sully is being hunted, they leave the tribe and fly across the water to join another tribe, a group of water-loving, beach-dwelling people called the Metkayina.

Like the Na’vi, they share a spiritual bond with nature and commune with all the creatures, including giant, whale-like behemoths that are super-intelligent and can read sign language.

Cameron spends a good chunk of his three-hour running time showing the Sullys assimilating into their new home, learning their ways, seeing how he forces his brash sons to swallow their pride and make peace with the local leaders sons who, naturally, give them a hard time before earning each other’s respect.

Most particularly, Cameron is eager to replicate what he did the first time around and fashion Avatar 2 as an eco-epic replete with green messaging about respecting nature and putting its sanctity ahead of profits.

The major add-on here, message-wise, is the film’s deep love for the great mammals of the ocean. In that regard, Avatar: The Way of Water easily ranks as the biggest, most expensive anti-whaling movie ever made.

That’s all well and good, but Cameron leisurely lays on these overly-familiar sentiments with a giant trowel and with a grand lack of subtlety that often becomes quite tiresome.

The whole “whale bonding” sequence, for instance, is so long they should super in a caption saying “OK folks, you’ve got a good five minutes to visit the loo“.

Inevitably, Quaritch and his team track Sully down and the scene is set for a very big climactic battle in which, yet again, technology and advanced weaponry can’t hold their own against spears, arrows and native warriors on winged beasts gnashing their teeth.

The world creation in Avatar 2 is simply peerless. On this score, Cameron cannot be faulted for the film’s scale and visual brilliance. It’s next level stuff, and glorious to behold. The photo-realism of the machines is truly staggering and arguably more beautiful and admirable in terms of design work than all of the critters of Pandora.

What makes you feel the film’s length is the highly predictable nature of the narrative, which signals its path well in advance. Hence, the dramatic story has no surprises. Couple that with the tension-free, goodies-vs-baddies tone of the battle sequences and you have a big, unarguably spectacular-looking film that can often feel undercut by rote storytelling.

But all this matters not a jot. As history is about to show, and as it showed with the first one, no amount of nit-picking will be enough to keep Avatar: The Way of Water from being a global crowd-pleaser.

In particular, a big portion of the droves that will be packing into multiplexes over the first few weekends in conditioned response to the film’s saturation marketing and ubiquitous signage – achieving the dream of 100% audience awareness – would have been born at around the time the first Avatar was released in 2009. It’s a film they’ve grown up with, so off they’ll go in their hundreds of millions to see what happens next with the blue people.

The film is a double-boon for Melbourne actor and playwright Brendan Cowell. As the Ocker, as-you-please captain of a magnificently conceived whaling ship commandeered by Quaritch (Lang) he turns out to be the most interesting character in the film. Initially objecting to his crew and vessel being taken over, once he realizes he has no choice, he spouts the film’s second-best line: “when you can’t get out of it, get into it” and becomes committed to Quaritch’s quest for revenge.

He also happens to deliver the best line in the film when, during a typically one-sided battle with the seaborne natives, he screams in frustration to his people: “Somebody shoot something!”. What a mind reader.

For the record, the next most interesting character is an army commander played very convincingly by Edie Falco (The Sopranos; Oz; Nurse Jackie). It’s a terrific, hard-nosed performance, but after making an impression in the film’s early reels, she’s sort of forgotten about. Pity.

Hopefully she’ll come back in one of the Avatar sequels Cameron has planned on the off-chance that this film turns a dollar.

Now, time for a very hard truth about Avatar: The Way of Water.

The film is being presented in 3D as well as 2D, and was previewed in 3D at Imax Melbourne.

Regrettably, 3D remains a process that is still too imperfect to justify the extra admission cost or to warrant any claims that is the go-to format for “event” films.

It certainly looks good, with a sense of depth that is occasionally strong, but as has long been the case, it doesn’t sufficiently add to the 2D experience to lift it above the gimmick it has always been.

And age-old problems persist: reflected light; the awkwardness of wearing 3D goggles over reading glasses; general irritation (one size does not fit all!) . Watch the film in 3D and you might find yourself spending part of the time fidgeting and readjusting.

May the quest to develop the perfect 3D continue.

But just as Avatar was supposed to herald the birth of new-century 3D as the future of cinema – a prospect killed by the cascade of unimpressive, poorly converted, sub-standard 3D films that followed – here’s hoping Avatar: The Way of Water sees the end of 3D.

At least for now.