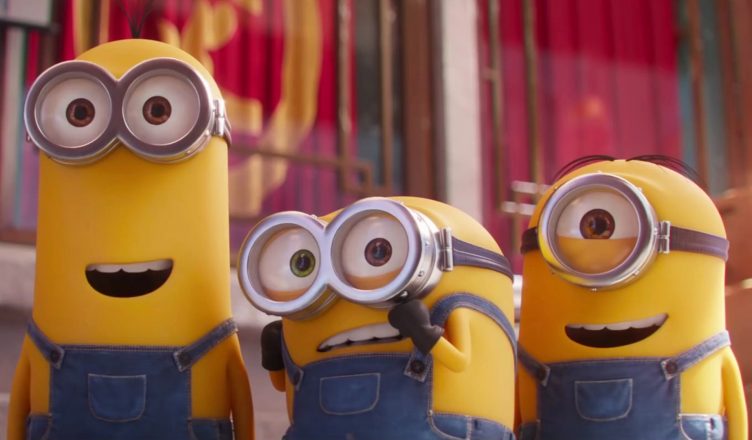 Troublesome trio: Three of the many Minions in ‘Minions: The Rise of Gru’.

MINIONS: THE RISE OF GRU *** (88 minutes) PG
In the latest example of “when you’re on a good thing stick to it” filmmaking comes Minions: The Rise of Gru, a terrific kids film that, just like its 2015 predecessor Minions (a hugely successful spin-off from the hit Despicable Me trilogy) is fast, full of chases, visual gags and colourful action, mostly involving the lovable lemon-yellow oblong mischief makers.

The film is pretty light on story: Gru (still voiced by Steve Carell, five films in) is now 12 and desperately wants to join The Vicious 6, a band of celebrity villains who suddenly have a vacancy after the not-at-all-accidental demise of their former leader Wild Knuckles (sprightly voiced by brilliant journeyman Alan Arkin, now 88).

Though he works his way into an interview, his application is rejected because he’s just a kid. Fuelled by spite and eager to impress them with just how good a bad guy he can be, Gru relieves them of a pendant that can imbue its owner with super powers.

Various excuses for fights and chases are duly conjured, sending Gru and the Minions off on various excursions that inevitably involve plenty of fighting, chasing and those high-pitched shrieks the world has gotten very used to.

Zestfully directed (again) by Kyle Balda – he helmed Minions: TROG and Despicable Me 3 with Pierre Coffin, who voices the Minions and co-directed the first two DMs with Chris Renaud – Minions keeps sweet with its formidable global fanbase by making sure the Minions are front-and-centre most of the time and as lovable as ever.

What’s really lovable, though, is the stratospheric standard of the animation, which has that wonderful elasticity that has become the franchise’s signature style. In that regard, Illumination, the French outfit behind the franchise, is easily on par with Pixar.

Look, there’s nothing really new here, so if you’re expecting anything wildly original or fresh, forget it. That might be a bummer to some, especially diehard animation fans, but the reason for that is clear once you crunch the numbers.

The popularity of this French franchise is truly phenomenal. The first three Despicable Me films took around $US2.33 billion at the box office (a fourth is planned, shock-horror) while Minions clocked up $US1.16 billion.

So who in their right mind is going to mess too much with the formula?

Another good thing about the film, particularly for adults who might get a tad restless at all the colour and movement, is that it’s only 80 minutes long (sans credits) and features a lot of great 7Os pop hits, including Linda Ronstadt’s You’re No Good.