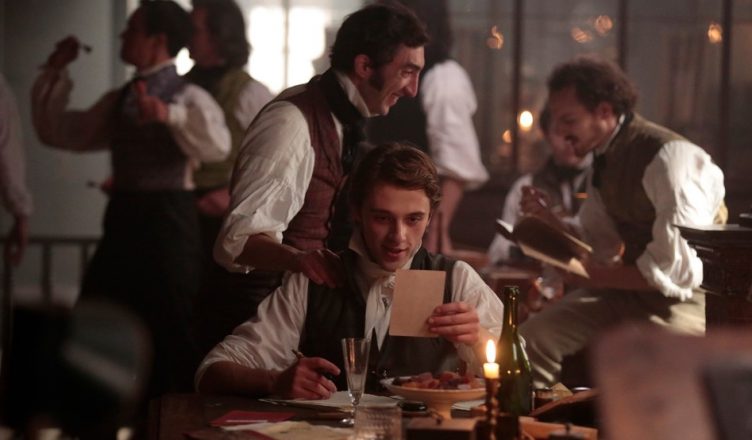 LOST ILLUSIONS ***1/2 (150 minutes; subtitled) M
It’s a perilous time for mainstream media, with each week heralding yet another drop in standards amidst a wash of humiliating apologies and pathetic mea culpas.

So it’s great timing that such a perceptive and caustic film such as Lost illusions should arrive to serve up a scorching satire of media malpractice.

Thing is, the film is not set present day. Based on the novel Illusions perdues by Honoré de Balzac, it’s set in post-revolution, post-Napoleonic Paris during the Bourbon Restoration amidst the self-consciously corrupt denizens of the city’s sensationalist journalist.

With that special kind of wide-eyed naivety that seems to attract the wicked, Lucien heads to Paris as an idealistic young lad, hoping to rise in society and realize his dreams of becoming a fine writer.

Failing to get traction on the demanding social ladder and with his finances dwindling, newspaper man Etienne Lousteau (Vincent Lacoste) gets him a job at his squalid outlet, one of many in a highly competitive market where beating your rival is more important than following the law.

In a pungent irony Lucien’s poetic ambitions are set aside as he takes to the grubby culture of his newspaper with a flair that blunts any sense of morality. Working as a theatre and literary critic he discovers the job wields enormous power; a few well-chosen words can kill a show or a career.

Balance and fairness have nothing to do with the gig, with people pressured by the threat of a bad review to cough up advertising dollars. Occasionally Lucien has a flash of conscience, but the lure of money and the demands of his bosses keep his pen sharp and venomous.

Slickly directed with great flourish, Lost Illusions is a brash, energetically paced tale of corruption, temptation and how easily high ideals can evaporate in the cosy company of colleagues happy to trade their consciences for an exciting, lucrative lifestyle of scandal, lurid indulgence and character assassination.

Given the lavishness and beauty of the period recreation, the film is also a reminder of just how deeply infatuated the French are with their history. Same goes for the Americans and the Brits. It’s a value well worth emulating, especially on screen.

And anyone in search of a fun parlour game, just imagine how Balzac would react to the excesses and ethical failures of today’s media, and how prophetic he was. The poor guy would probably go spare.